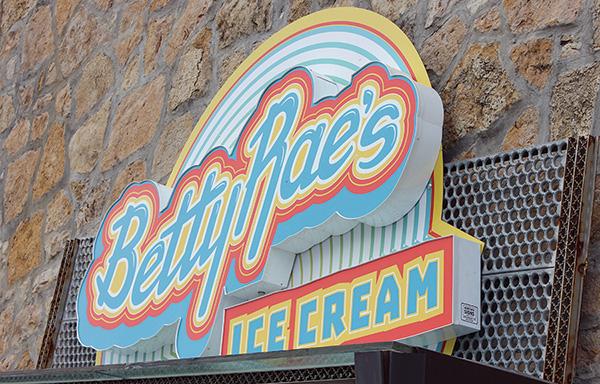 When sophomore Kate Jones was making a trip down Wornall Road, something new caught her eye. A bright, colorful sign adorned the formerly empty space that used to house the frozen yogurt chain, Orange Leaf, located across the street from QuikTrip. This space is now the home of a new, local ice cream shop called Betty Rae’s Ice Cream.

Friesen first became interested in  sweets and ice cream after working at an ice cream shop called Sparky’s during his time in college in Columbia, Mo.

“[Sparky’s] was my first kitchen job,” Friesen said. “I saw how much fun it could be. Even though that was nine years ago, it stuck with me and I saw how you could do it. I did a lot of work since then and learned new things, learned how kitchens work, learned how businesses work and how to make it happen.”

According to Friesen, the process of opening Betty Rae’s involved “some pretty hard work.” Friesen and his brother-in-law built everything in the shop while Friesen worked full-time up until a few months before Betty Rae’s opened.

“We looked in Kansas City for over a year to find a good location,” Friesen said. “The thing is, we’re an ice cream parlor. You have to pay your rent. You have to pay your rent in really tiny pieces because you’re selling ice cream. Say you’re at a nice restaurant, you have two people come in and they both order a twenty dollar item and then a bottle of wine. You’ve made a bunch of money right up front. [At betty Rae’s], we sell small things, so that means you need a lot of them and a lot more people to come in. When you need more people, you have to have a really good neighborhood around.”

According to Friesen, a “good neighborhood” would include lots of walking traffic, a decent amount of road traffic and surrounding schools and churches.

“Most of the places that are [good neighborhoods] already have something similar [to Betty Rae’s],” Friesen said. “For example, Westport. Westport is a good place to have a ice cream parlor, but they’ve already got Murray’s. Brookside is great, Foo’s location in Brookside is phenomenal. We couldn’t be too close to any existing ice cream parlor but we needed all these things to be in the neighborhood, and we found [our current] place and it was just perfect.”

Along with the task of finding a good location and setting up Betty Rae’s, Friesen and his employees make the ice cream sold in Betty Rae’s from scratch.

According to sophomore Maureen Egan, an employee of Betty Rae’s, all of the ice cream and a large portion of the ingredients are made in house.

“We even make everything down to the waffle cones and the brownies that go into the ice cream,” Egan said. “I think that makes [Betty Rae’s] more unique and homey.”

Inspiration for flavors hits Friesen at random times, such as when walking through the grocery store or visiting a cafe.

“Sometimes, you just see different ideas in different places,” Friesen said. “Maybe I’ll go to a bakery and see a muffin they have and I’ll go, ‘Oh, that muffin, that sounds like a good combo, that’d be great ice cream.’ The other day I was walking through the grocery store and I saw some pineapple and then I happened to see Thai basil. So I was like, ‘Pineapple and Thai basil would be an interesting combination.’ So we’ve been making that and people have been liking it.”

New flavors and menu items are available every week as well.

“Since we’ve opened, I’ve added one new sundae, three new flavors, a new sauce and I’m just gonna keep going like that,” Friesen said. “You could come in every week and there will be something new.”

We’re busy a lot. At first I thought the rushes were because we just opened, but there’s been a rush every single night.”

The homemade recipes allow for unique flavor combinations to be created, such as the Pineapple Thai Basil or the Root Beer ice cream.

To create the ice cream, a made-from-scratch base must be created out of cream, milk, sugar and sometimes eggs. Different ingredients are added to the base, such as fruit, different creams, homemade cakes or brownies.

According to Egan, the appeal of the new ice cream shop and their unique process of doing things has proven to be successful.

“We’re busy a lot,” Egan said. “At first I thought the rushes were because we just opened, but there’s been a rush every single night.”

The atmosphere of the store is also appealing, according to Jones.

“I liked how [Betty Rae’s] was really colorful inside,” Jones said. “It was fancy ice cream, like [other local ice cream shop] Glacé. I felt like it was more family-oriented than Glacé. Betty Rae’s had chalkboards and coloring sheets.”

According to Friesen, a “bright, happy atmosphere” is exactly what Betty Rae’s is going for.

“Betty Rae is my grandmother’s name,” Friesen said. “She was a great lady, and she really loved cooking. She was really happy when she could just be cooking the whole afternoon or making dinner for family. She always really wanted people to be happy and eating and having a good time. That’s kind of what we wanted to keep going…that was the right spirit to have.”

Egan agrees that Betty Rae’s has a positive environment.

“It’s really kid-friendly,” Egan said. “We have coloring sheets up on the wall, it’s very open. We have a flavor suggestion board where you can suggest flavors and we show people around, so it’s pretty family friendly. The environment is my favorite part.”

Despite all of the time and hard work that went into the shop, the opening of Betty Rae’s has been positive for both Friesen and Egan.