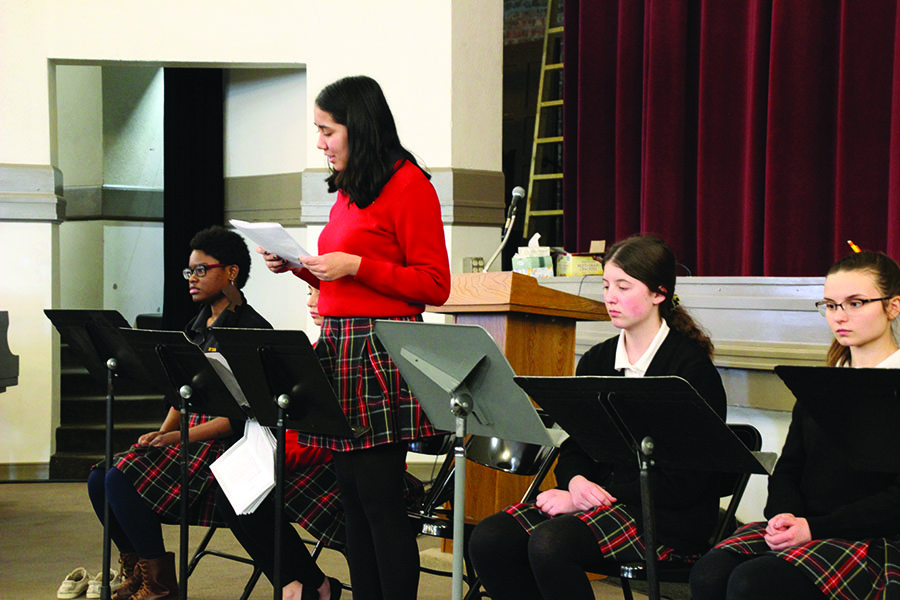 Theater Teacher Shana Prentiss attentively listens to an eager group of students interpret the monologues of Annabella DeLeon, Farida Azizi and five other women represented in the documentary play, SEVEN, while sitting in the center of the auditorium seats after school on a Monday. As she observes the students’ rhythmic readings and vocal fluctuations, Prentiss is already imagining what the group will look like performing in front of an audience only four days from then on Friday in STA’s new spring show: Reader’s Theatre.

Debuting March 8, Reader’s Theatre is a week-long play that allows students to hone their acting abilities by performing on-script and without typical staging elements such as costumes and lighting. Prentiss introduced the concept to STA to increase theater participation and give performers a new experience.

“I love the three productions that we do, but I wanted to find a way to add something else to it,” Prentiss said. “The beauty of Reader’s Theatre is that the rehearsal period is so short, so we decided, you know what, let’s try it. The idea is that you get the essence of the story, but you do it without costumes, light, makeup and all of those things. It’s more about doing a vocal interpretation of the material than it is about full-out acting.”

Interested in challenging herself as a performer with Reader’s Theatre, senior Lauren Daugherty has decided to participate after being a part of every musical, play and Student Production at STA since she worked sound crew her freshman year. She believes the show will encourage a different performance skill set from what she is used to.

“I am very excited to, if I do get cast of course, see how quickly I am able to research and develop the character in just a week,” Daugherty said.

In addition to time constraints, Prentiss believes the structure of SEVEN will also pose an acting challenge for participants. SEVEN features an hour of interwoven monologues all based off the stories of seven women from the Vital Voices Global Partnership, an international network that financially supports women with leadership visions, who have profoundly impacted their respective communities. Prentiss hopes the diversity of the piece will encourage a broad range of students to audition.

“There are women from Nigeria, Cambodia, Ireland and Guatemala — I love that element and am hoping it will pull some of our students of color to be encouraged to audition,” Prentiss said.

Sophomore Arwen Dickson believes the diverse and storytelling aspects of SEVEN will draw viewers into Reader’s Theatre in a different way from a typical production.

“I feel like it will impact people in a degree more similar to a public speaker, rather than a traditional play like Letters to Sala, and definitely a stark contrast to a show like Spamalot,” Dickson said.

Prentiss believes the feminist themes of the script will interest audiences.

“I love the idea of it being female-centered with female playwrights,” Prentiss said. “We do not see enough work from female playwrights in this country, so I’m trying to do everything I can to promote these amazing women out there who are writing pieces.”

Along with supporting underrepresented groups, promoting female-empowerment is important to Prentiss when selecting a piece for a Reader’s Theatre production.

“I wear my feminist heart on my sleeve — I don’t think it’s surprising to anyone that I’m a feminist, but I’m open to all kinds of scripts,” Prentiss said.

No matter the type of script Reader’s Theatre takes on in coming years, Prentiss hopes SEVEN and future productions will first and foremost allow more students to involve themselves in STA theater.

“It is hard to do a full play that’s focused on diversity because I don’t have that many students that are coming to audition for it,” Prentiss said. “But maybe we could get kids that could commit to one week — I would love to do that.”