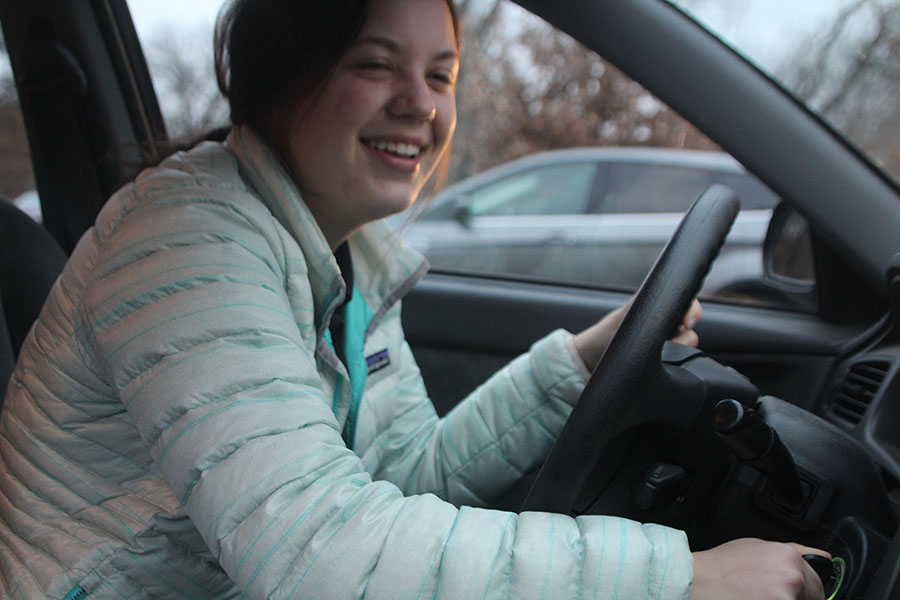 Junior Ava Lee starts her car before leaving school Dec. 4. Lee’s car got t-boned last year on 55th Street, behind the STA track. “After my experience last year, if possible, my parents always drive me to school when there is ice on the roads,” Lee said. photo by Claudia Benge

Junior Ava Lee starts her car before leaving school Dec. 4. Lee’s car got t-boned last year on 55th Street, behind the STA track. “After my experience last year, if possible, my parents always drive me to school when there is ice on the roads,” Lee said. photo by Claudia Benge

Forecasting cancellations: decisions behind the district

Between public and private schools in the Kansas City metro area, school administrations must consider elements such as accessibility, budget and student impact when calling snow days. The city of Kansas City, Missouri is tasked to clear thousands of road miles of ice to allow for class to proceed on inclement weather days.

by Lily Hart and Sophia Durone

As the flurries begin to fall on Kansas City, some students do everything in their power to secure a snow day. Freshmen and seniors alike place spoons under their pillows, flush ice cubes down the toilet and wear their pajamas inside out. St. Teresa’s Academy President Nan Bone has a less superstitious approach to the occurrence. When the forecast predicts snow, Bone phones her “pod of presidents” from Pembroke Hill School, St. Paul’s Episcopal Day School, Notre Dame de Sion High School and Rockhurst High School to discuss whether school should be in session the following day.

There is a multitude of factors that administrators consider when determining if they should cancel school due to inclement weather. Bone takes into account STA’s 20 acre property and the differences in weather conditions from the school’s 76 represented zip codes.

“Can the people that we hire get here?” Bone questions. “Can we get these parking lots cleared for you? My concern always is my drivers, the distance they’ll be driving, the road conditions…”

As a private institution, STA pulls students from both Missouri and Kansas, making it necessary for the administration to consider many regions of the metropolitan area, while public schools must only consider a single district. The discrepancies between the two states’ winter road clean-up policies cause issues for students on both sides of stateline.

Kansas City, MO Director of Communications Chris Hernandez expresses that the quality differences in snow plowing are in part due to how Kansas City divides up its land. The geographic area that Kansas City, MO must cover in a storm is larger than the individual neighborhoods in Kansas who each control their own plowing.

“In every storm, Kansas City, MO treats and plows 6,400 lanes miles spread across 320 square miles and parts of four counties,” Hernandez said. “Suburban communities that have only five, or even 20 square miles, can plow their routes over and over again in the same time [we need].”

With STA being located within Kansas City, MO, Bone must consider the city’s snow removal priorities when requesting help during midday storms.

“We call the city right away and say, ‘Hey, can you come in and [clear our surrounding roads]?’” Bone said. “‘We know we’re not your top priority, the main thoroughfares are, but we’re a school and kids are sliding past us.’”

“During snow events, we are in regular contact with KCPS and other school districts to assist them in their cancellation planning,” Hernandez said.

The other aspect of this quality disparity lies in the city budgets. Kansas City, MO has allocated $12,454,688 for public works, including snow removal, in the 2019 budget to cover thousands of miles of road. Prairie Village budgeted $2,188,463 for only 258 miles according to their 2019 public budget statement.

According to NBC Action News, the impact of poor road conditions can be seen through the number of snow days taken by schools this year. The Kansas City, Kansas district has had five snow days while Missouri has had nine. Transportation Manager of the Kansas City Public Schools Perry Eubank elaborates.

“Beside what’s happening on the road, it’s also trees that might be down from the heavy icing or condition of sidewalks.” Eubank said. “You might not even have icing on the roads but the decision might be it’s too dangerous for kids to be waiting at a bus stop.”

Like Eubank, Bone must contemplate the wide range of impacts a cancellation will have on her students, but despite her efforts, she cannot please everyone.

“I sometimes will have people upset with me in areas where they [do] call off school,” Bone said. “Do we get it wrong sometimes? Absolutely. Are parents happy with us all the time? No. But I think that we weigh every single thing.”

Hernandez faces similar backlash from citizens when road clearings are not to the public’s satisfaction.

“We are aware of the frustration the

12►
blizzard brought our residents and the inconvenience school cancellations cause for parents and others,” Hernandez said. “We… can assure you that crews worked overtime to keep salting and plowing streets until all roads [were] safe for travel.”

Despite the city’s hard work with limited resources, Bone states that in unsafe conditions, an extra day of school is not worth the risk of student danger for STA.

“I think that with computers now, it’s not such a big deal; you’re still at home doing work and your teacher can still correspond with you,” Bone said. “We still want to get our number of days in, but for us it is, in this day and age, not a big deal.”

Despite their different considerations, Eubank and Bone both work to ensure an accessible learning environment for their students each day and use other schools’ decisions as points of reference.

“We listen for those [public] high schools to see what they’re doing and think, ‘Oh ok we’re on the right track,’” Bone said.