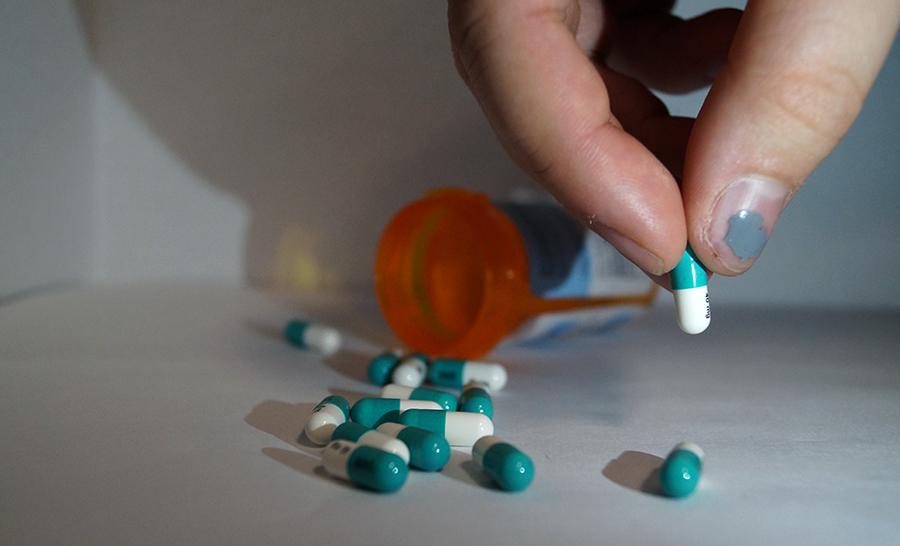 Many high school students resort to taking study drugs, such as Adderall and Ritalin, to boost academic performance. However, many are unaware of the impending risks.

by Meredith Mulhern and Violet Cowdin

It’s a Wednesday night. You’ve just gotten home from a long practice, you’ve still got hours of homework ahead of you, and you have a massive history test tomorrow. You are presented with two choices: seek the help of a study drug, or do the work on your own.

According to the National Institute on Drug Abuse, 6.8 percent of high school seniors use Adderall, a prescription drug that is normally used to treat Attention Deficit Hyperactive Disorder, or ADHD. However, students across the country are now using “study drugs” in order to excel in school.

There are many different options for study drugs, such as Focalin, Vyvanse, Concerta, Adderall and Ritalin. All of these drugs have the same effect on the brain and all contain amphetamine. The amphetamine in the drugs increases the output of the dopamine hormone in the brain, which in turn increases focus.

Along with increasing focus, study drugs can also increase energy, according to STA senior Holly*.

“[Taking Adderall] made me feel really good,” Holly said. “In about fifteen minutes, I noticed my energy level was boosted and I actually felt like studying for once.”

“I enjoy learning as opposed to hating it when I’m on [Adderall],” John said. “I write every word down that the teacher says in class, absolutely everything. My attention span is so much better when I’m on it.”

Besides using the drug for studying and paying attention in class, a growing number of high school students use the drugs in preparation for important tests, finals, and the ACT or SAT.

“I took the ACT three times and took [Adderall] before each test,” Holly said. “Not only do [study drugs] make you hone in on what you’re doing, your confidence level is also boosted. I didn’t find myself worrying if I couldn’t get the answer to a problem. Standardized tests typically weigh me down and I get distracted easily, but when I took the pill, all of those feelings disappeared, I felt like I was a better student.”

According to John, taking Adderall caused all of his successes in the past two years.

“I bumped my GPA from a 3.2 to a 3.9 from sophomore to junior year,” John said. “I branched out more and I was varsity in every sport I was in. I met a lot of new people, made a lot of new friends, got in shape and my parents liked where I was going more. I’m pretty lazy, so it basically helps me to do the things I should be doing.”

While these students feel positively about the drugs, many studies show that there are several negative side effects that should be taken into account.

According to a study conducted by the University of Texas, the use of study drugs poses the risk of causing the user to develop a psychological and physical dependence on them.

Both Holly and John believe that they can stop their usage before they can develop an addiction.

According to Guidance Counselor Amanda Johnson, any student that develops an addiction should get help and talk to a counselor.

“[An addiction to study drugs] is just like any addiction, you’d want to seek professional help,” Johnson said. “If you’re recognizing that your study drug is becoming an addiction, that’s just like alcohol or any other street drug. You want to make sure you’re getting a handle on that, getting it in check and getting help.”

Along with running the risk of addiction, students who use study drugs should also take into account the numerous negative side effects that come with them.

Although John and Holly have had positive experiences with study drugs, both have experienced negative side effects as well.

“I took [Adderall] on the very first day of [my sports practice],” John said. “I didn’t eat lunch that day, and I almost passed out at practice. You don’t sleep very well or at all the night after [you take it], and you get [angry] when people distract you when you’re on it.”

While John’s negative experience came during an activity outside of a learning environment, Holly’s “experience hurt [her] when Adderall was supposed to be “helping” [her].”

“The worst thing that happened to me while I was on [study drugs] was during the ACT,” Holly said. “I got extremely thirsty, and of course they don’t let you leave during the test. I started to lose my focus. I had to tell myself to calm down and re-center myself.”

When STA junior Heather* took Adderall for a test at school, she encountered similar troubles.

“I decided to take [Adderall] because I had a huge test coming up that I had to get a good grade on,” Heather said. “I had heard of my friends taking [Adderall] and getting positive effects, so I decided to try it.”

As she feared might happen, after Heather took her dose of Adderall, she was hit with various negative side effects that discouraged her from further use.

“[Adderall] made my mind race a mile a minute,” Heather said. “I could not focus, along with shaking that lasted throughout the entire day. I also couldn’t sleep, and was very paranoid and anxious. It was terrible.”

According to Sean McCabe, who is a research associate professor at the University of Michigan, “Students may not know the stimulant’s documented situations in which a drug might be harmful or recommended precautions or how it may interact with other drugs.”

Adderall is considered to be a schedule II drug, meaning that these specific drugs have a high potential for abuse, with use potentially leading to severe psychological or physical dependence, according to the Drug Enforcement Administration, or the DEA.

Despite many doctors’ and counselors’ warnings, students continue to take drugs like Adderall and Ritalin to boost their academic performance.

“I think students take study drugs because they seem to help most people out even if there are negative aspects,” John said. “They’re also really easy to get a hold of.”

According to the Center for Disease Control, 6.4 million children in America are diagnosed with ADHD and have been prescribed drugs like Adderall. However, instead of having a prescription, John, Holly and Heather obtained their doses from fellow students that deal the drugs.

“My friend was buying Ritalin for finals,” Holly said. “She asked me if I wanted to buy some, and I said yes. Weirdly, when my friend offered to get me [Ritalin], all of [the negative information I heard about the drugs] seemed to slip my mind.”

While Holly may occasionally use study drugs herself to focus more easily, she says she “would not encourage others to take Adderall.”

“[I don’t deal study drugs],” Holly said. “I would never want to be responsible for someone else’s addiction or problem. I can’t say I encourage it since you’re technically not supposed to take them if you’re not prescribed them.”

Johnson warns that consequences of taking study drugs not only put students at risk for an addiction, but the consequences at STA hold the possibility of being severe, ranging from being “considered “cheating, drug and alcohol use on campus, and deception.”

As for teaching STA students about study drug usage, there are no current plans in place, according to Johnson.

“[The subject of study drugs] brings up a good point, so that may be something [that counselors] need to look at. [Study drugs are] controlled substances for a reason; they’re very powerful substances.”