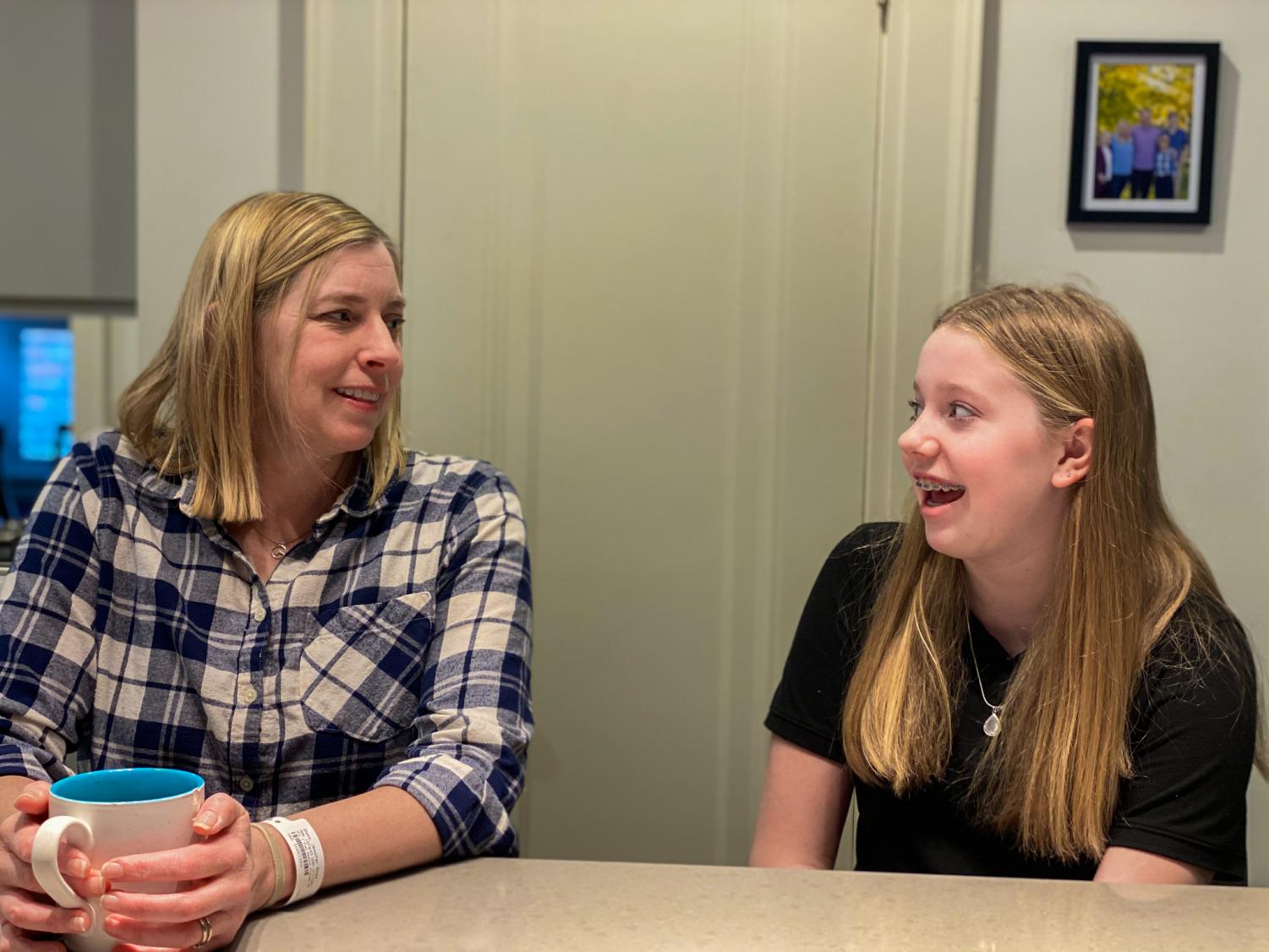 Jennifer and Rose Olson recount the changes they had to make to their daily routines when Jennifer goes through chemotherapy Feb. 19. Both Olsons emphasize the importance of raising cancer awareness and talking about the impact of cancer on the STA community. photo by Becca Speier

Jennifer and Rose Olson recount the changes they had to make to their daily routines when Jennifer goes through chemotherapy Feb. 19. Both Olsons emphasize the importance of raising cancer awareness and talking about the impact of cancer on the STA community. photo by Becca Speier

Relay For Life connects cancer to the community

STA holds its first Relay For Life March 6. This event aims to raise funds for the American Cancer Society and raise awareness for cancer’s impact on families in our community.

by Anna Ronan and Lily Hart

Former English teacher and mother of three Jennifer Olson was diagnosed with stage four metastatic lung cancer April 27, 2015, beginning a new phase of her and her family’s life. This meant she could no longer substitute teach at Visitation School due to her compromised immune system, participate in the carpool to the school play because she cannot drive on pain medication or plan a dinner two weeks in advance because she could not know how she would feel. The Olsons had to settle into a new routine, working around rounds of chemotherapy treatment to hold the cancer’s growth at bay.

“‘Every three weeks mom has chemo and the next day she doesn’t feel so great, and the day after that she’ll go to bed, and we will kiss her goodbye from bed instead of her making sure we’ve got our lunches,’” Olson said, echoing her children’s daily routine during her rounds of chemotherapy treatment.

Olson remembers getting out of the hospital after a round of chemotherapy just in time for her youngest son’s first communion.

“[My children] were so young that even though we were honest in appropriate terms that they could understand, you can’t really wrap your head around that when you are so small,” Olson said. “I wonder if [my son] even remembers what I was like before cancer, before treatments.”

To aid in the fight against the disease, many people around the country take to donating to the American Cancer Society, a nationwide organization dedicated to eradicating cancer. Senior Brooke Fallis took raising funds and awareness one step further by bringing an ACS-inspired event called Relay For Life to STA to take place March 6.

Relay For Life is a fundraising cancer walk, with proceeds that go towards the ACS’ goal of “[freeing] the world from cancer.” In teams, participants will have one member walking the track at all times, demonstrating how cancer never sleeps and how cancer patients don’t stop fighting just because they are tired. According to Fallis, nearly 400 students will be in attendance for the 12-hour event.

“I am blown away by the support from St. Teresa’s,” Fallis said. “So many amazing people were so willing to join the Relay For Life committee, and they are being incredibly helpful wherever and whenever we need help.”

Since her diagnosis, Olson says their family has made a point to raise awareness about the scope of cancer’s effects on families. Most recently, she and her oldest children participated in the STA student-produced Relay For Life video called “Let’s Relay, STA” which premiered at the first informational assembly Sept. 26.

“We wanted to be involved with [Relay] for the public awareness piece, not as much for the fundraising aspect,” Olson said. “I like the idea of this kind of event bringing awareness to how I bet every single person at that event knows someone and has been affected by cancer.”

Rose expanded on her mom’s sentiment.

Already, Relay is beginning new conversations. Olson found that just by participating in the video, her family revisited her original diagnosis.

“Because we live with it every day, we don’t talk about it every day, so it was a good conversation starter for us as a family in terms of… getting in touch with how [my kids] were feeling during diagnosis,” Olson said. “Because they reminisced about when I was diagnosed and what that felt like, and we really hadn’t talked about that for a long time.”

Ivan Winfield, a father in the STA community, believes Relay For Life is giving hope to those who have limited knowledge of, or little experience with cancer.

“[Students are] going to see a lot of people there that have recovered and have tackled cancer,” Winfield said. “It’s great to see now that more people are surviving and taking part in these things.”

Two months into her first year at STA, Madi Winfield, Winfield’s oldest daughter, was diagnosed with stage 4-A Hodgkin’s Lymphoma. Four years later, he himself was diagnosed with Multiple Myeloma in his spine. Being both a patient and a family member of a patient was important for Madi’s understanding of the illness.

“Cancer is something where no two experiences will be the same and it’s hard to relate between them,” Madi said. “Coming at it as a previous cancer patient and seeing it from both sides has been an eye-opening experience.”

Madi encountered widespread and steady support from STA during her treatment.

“Very few people were asking me questions beyond just ‘how are you feeling, what’s going on, give me information,’ and that was really wonderful because I was so overwhelmed that I couldn’t have answered those anyways,” Madi said. “It was just support, and that was so great.”

Even with the support from school, Madi found that talking about her illness wasn’t the first thing she wanted to bring up in conversation.

“Talking about other things is absolutely key,” Madi said. “Not trying to pretend that the cancer doesn’t exist, not trying to sweep it under the rug, it’s letting the cancer patient live a normal life.”

Winfield believes that education is an important part of the cancer discussion, and that’s one of the reasons he appreciates the Relay For Life campaign.

“The more people that know about their own cancers and the other people’s cancers that can reach out and help one another,” Winfield said, “I think those are the kinds of things that are going to help people get through it and continue on the legacy of better treatment and better lives afterwards.”

Winfield’s younger daughter, junior Georgia Winfield, organized STA’s Pantene Beautiful Lengths ceremony in 2017 but found that it didn’t give her much of an opportunity to teach people about cancer. For her, Relay For Life is a second chance.

“There’s a lot more education of what cancer is and what people are going through,” Georgia said. “I think that’s something that’s really important that I missed the mark on with the hair donation event that we really need to push in Relay.”

Georgia, who witnessed two members of her family go through treatment, encourages support within the family to truly understand both the perspective of the individual with cancer and the family members surrounding them.

“Everyone that I’ve met that’s dealt with it directly, whether it’s being in the same house or having it, there is such a different reaction and there’s no one way to treat that person [with cancer],” Georgia said. “It’s an instance where you really need to listen to whoever you’re talking to and get to know them to help them.”

In terms of support, senior Maggie Rowland found it hard to ask for help from people in her community. Rowland’s mom, Kelly, was diagnosed with breast cancer in 2017.

“I didn’t know how to ask for support, especially from people that hadn’t been through it before, because they don’t know what it’s like,” Rowland said.

Rowland and her mom took part in the video for the initial assembly as well, and Rowland is on the Hospitality Committee, which organizes the food for the event.

“I think once we did the video and my mom was here at the assembly, I think that was when I wanted to be more involved in [Relay For Life],” Rowland said.

Before taking part in the video, Rowland tried to not talk about her mom’s sickness at school. She found the conversation surrounding cancer opening up after Relay For Life was announced.

“I have had teachers come up and ask about my mom,” Rowland said. “I can see people feel more comfortable talking about it.”

As a survivor, Madi found that talking about cancer can be tricky and that understanding a cancer patient’s needs when they are going through treatment is key.

“Everyone’s experience is so different, physically, emotionally, spiritually;” Madi said, “giving them space until they tell you anything they need is my biggest tip to people around people with cancer.”

Olson, Kelly, Winfield and Madi will all be attending the event in support of Fallis and the other Relay for Life committee members, and to continue to fight against cancer.

“I love that the students at the event, whether it’s through the luminaries… or through conversations, or both, would be able to share with each other what their experiences are with cancer,” Olson said. “And that in those conversations, you each would validate each others’ experience.”