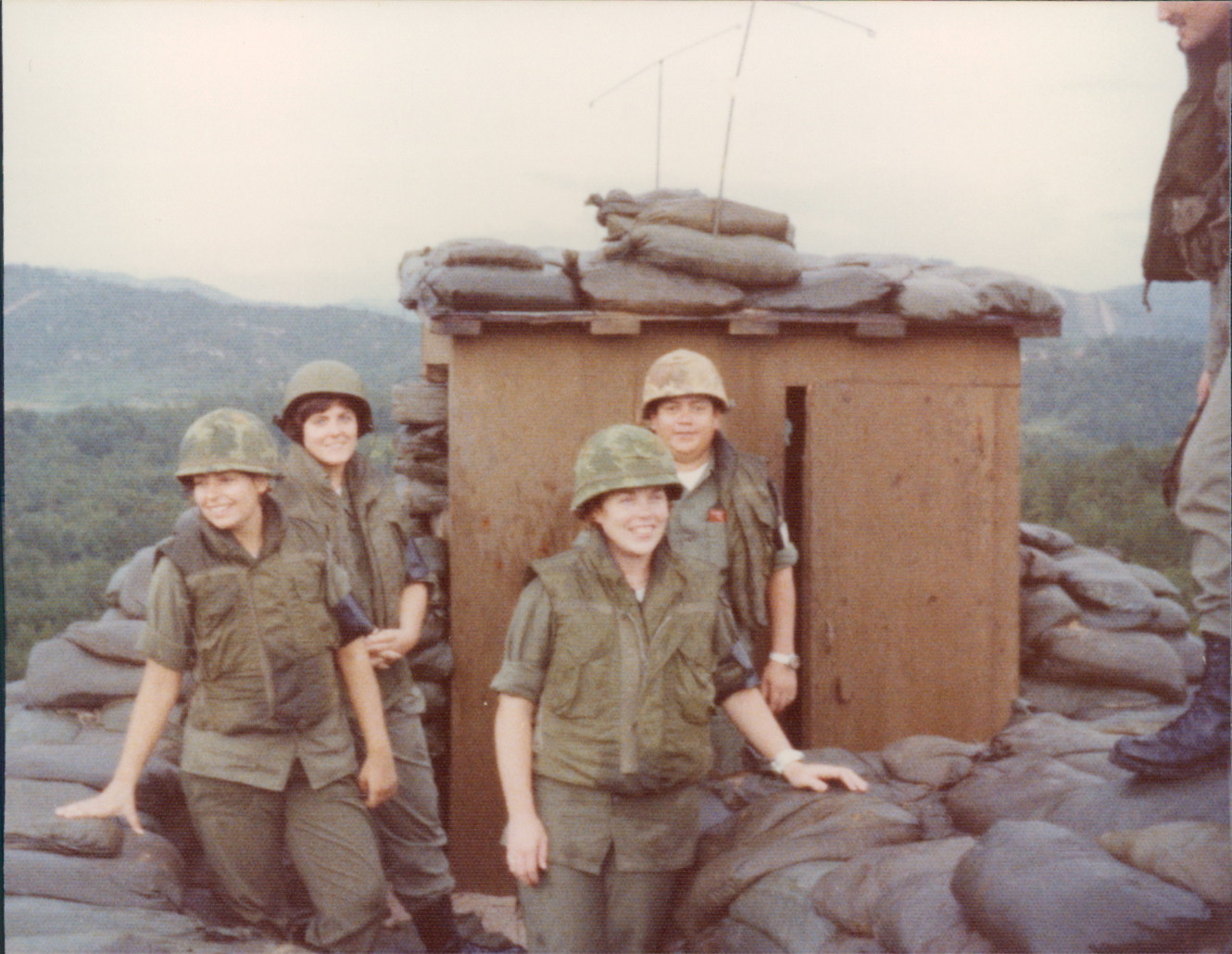 Mary Cox stands next to fellow nurses in a demilitarized zone in 1978. photo courtesy of Mary Cox

Mary Cox stands next to fellow nurses in a demilitarized zone in 1978. photo courtesy of Mary Cox

The financial “draft”: the U.S. military’s presence in high school

Will you be drafted? As tensions with Iran grew with the recent assasination of the Iranian general Qassim Solemani, the idea of a military “draft'' took social media by storm. This caused a panic and a misunderstanding of the presence of the military in our lives. The military “draft” is actively involved in the lives of many and through a form of financial recruitment.

by Claire Smith and Rachel Robinson

Jan. 3, a day after the U.S. issued a drone strike on an Iranian general in Baghdad, Iraq, junior Lilly Stafford opened TikTok. As she swiped through videos, she saw one overwhelming trend on her “For You” page: jokes about “the draft.” At first these jokes were funny, but she soon began to see comments expressing fear about the possibility of a draft becoming a reality. Globally, the attack sparked fear of further conflict between the U.S. and Iran and manifested across social media in an array of jokes and memes.

“I think [the TikTok trend] escalated a lot faster than people expected it to and caused panic in a lot of people that might not be as educated in the political side of things,” Stafford said. “I feel like it just blew up a little bit too much beyond what it should have. It was a joke and then it started to turn into, like, an actual political issue.”

As someone who considered serving in the military for four years and has familial ties to the Navy, Stafford does not believe there will ever be another literal “draft.” In the traditional sense of the word, a draft is when the U.S. government requires military service from certain demographics during war.

“I do think that there would be the potential of needing something [to get recruits] but not to the extent of what a draft is,” Stafford said. “If there’s a war that not everyone politically agrees with, then they’re going to be like, ‘okay, we need like people for this.’ But I don’t think we would resort to the same way we [would] draft in the past.”

According to Sergeant Kevin Elschlager, a recruiter from the U.S. Army Recruiting Battalion, there is no chance for a national draft to occur.

“I can tell you for a fact that [a draft] is not going to happen,” Sgt. Elschlager said. “The media is saying ‘World War III is about to start’ and from the information I’ve gotten, that’s not the case. Like even during the height of the Iraq and Afghanistan war, there was no draft going on. So there will be absolutely no draft that is going to happen.”

However, according to Education Week, a modern draft is already at work. Commonly called the poverty draft, this takes place through military recruitment which targets public schools in low-income neighborhoods.

The poverty draft came into existence because of the post-9/11 G.I. Bill which offered tuition-free higher education or job training in exchange for three years of service. It was accelerated in 2002 by the No Child Left Behind Act, enacted by President George Bush, which requires that military recruiters have the same access to public schools as college recruiters.

As a recruiter for the U.S. Battalion, Sgt. Elschlager searches for individuals who meet the requirements of the recruitment process and helps them find opportunities through the Army.

“My job is a recruiter, and that’s the main source of what we do, going out and finding qualified people to join the Army,” Sgt. elschlager said. “Start the application process, go through future soldier training programs, making sure you’re ready to go to basic training after you enlist.”

In a study conducted by Education Week, it was observed that military recruiters visited high-income schools — measured by number of students qualified for free lunch — only five times per year compared to 40 times at low-income schools. The students being recruited are the ones most financially vulnerable and most in need of military financial benefits.

“The reason you might not see [recruiting] at [STA] is that for public schools to receive federal funding, they have to let the military into their schools and they have to release phone numbers and names of all the students,” Sgt. Elschlager said. “Now if you go to a private [school], to where they’re not federally funded or funded by the state, they are not obligated to do that.”

In regards to financial aid for college expenses, the U.S. military offers a generous amount of support for recruited students. According to Sgt. Elschlager, the Army Reserves and the active Army programs are where the majority of financial support options can be found.

“If you plan on going to college the Army Reserves are a really good program,” Sgt. Elschlager said. “If you go active duty, you serve three years or more on any military branch, you get a full ride scholarship to any major university. And you get a stipend to live off of while you’re in school.”

According to Teen Vogue, 49% of young people say tuition payment would be a reason they would join the military. St. Teresa’s alumna Mary Cox, class of 1969, said the college financial support offered through the Army to serve as a nurse was a major component in her service.

“[Financial support] was 100% a big part of my decision,” Cox said. “There were nine children in my family, and I was the third oldest. We were all in high school together, we were all in college together, and there were six girls that came behind me. If we were gonna get college paid for, we were going to have to find a way.”

Cox served as a first Lieutenant nurse in 1973 as the Vietnam War was drawing to a close. She retired 20 years later as a Lieutenant Colonel and the Chief of anesthesia in the ICU unit. Cox had wanted to be a nurse her whole life, and the Army made that childhood dream possible for her.

“I was always going to be a nurse, from when I was 5 years old,” Cox said. “When I was at St. Teresa’s, the only college in Kansas City that had nursing that was accredited was Avila [University], so it was a no-brainer for me. When I got to college, we were in the middle of Vietnam [War], and they needed nurses. [The Army] had a program at the beginning of your junior year where they would pay you a salary and a rank for the Army for two years and pay for college.”

Cox made the decision to join the military only after she had begun her college nursing career. There were no recruitment programs at St. Teresa’s when she was there and there are still none today.

Principal for student affairs Elizabeth Baker spoke on the absence of recruitment programs at STA. As mentioned by Sgt. elschlager, public schools are required to allow military recruitment, but St. Teresa’s still has the option to independently bring in these recruiters. While Sgt. elschlager spoke about federal funding, Baker discussed the difference in message that dictates recruitment.

“[St. Teresa’s] mission is CSJ, so we have a mission statement, and so does public school,” Baker said. “[Public schools’] walking statement is ‘we’re trying to make good citizens,’ so that’s why they have [a recruiting] requirement. They can’t regulate independent, charter and schools that are religious based. Those schools can choose to have part of their mission to make good citizens.”

Baker spent 15 years at St. Mary’s High School where there were constant recruiters. St. Teresa’s is the first high school for Baker that has not had recruitment in any form.

“This is the first school I’ve been at that has not had [recruitment],” Baker said. “Whether it was the sisters who said ‘we’re not going to do that,’ whether the Army and the Armed Forces said ‘it’s an all girls school; we don’t want to recruit in all girls school because we won’t get that many recruits.’”

Junior Natalie Rovello believes that there are a number of reasons why there is no military presence at St. Teresa’s, including but not limited to gender.

“I think part of it might be because we’re female, but obviously there are women in the military,” Rovello said. “I think it’s mostly because this school is in a different tax bracket [than public schools]. And so they’re more likely to go to college and do those kinds of things instead of seeing the military as their only option.”

Because of these factors, Rovello does not think that there is a need for any sort of recruitment program at St. Teresa’s. She suspects that it would go widely unused and that any students who would take advantage of it can navigate the process on their own.

“I’m sure that there are some people here who are thinking about the military, but maybe not as their primary option, maybe just doing it at one point in their life,” Rovello said. “If that’s where their hearts want to take them, they can figure that out for themselves. I don’t think not having recruitment really deters anyone at all.”

On the other hand, Cox believes that for students who are looking for ways to pay for their education, recruitment programs are essential. She says if these military programs had been available to her in high school, she would have jumped at the opportunity.

“I think if [military recruitment] had come [to STA] I would have looked more seriously at the programs which paid for all four years,” Cox said. “But I did not know about that until later, until I was basically in the Army. Then I was like ‘wow all these other girls got this information about this program because recruiters had come to their high schools.’ I think that is a little bit of a disservice to St. Teresa’s.”