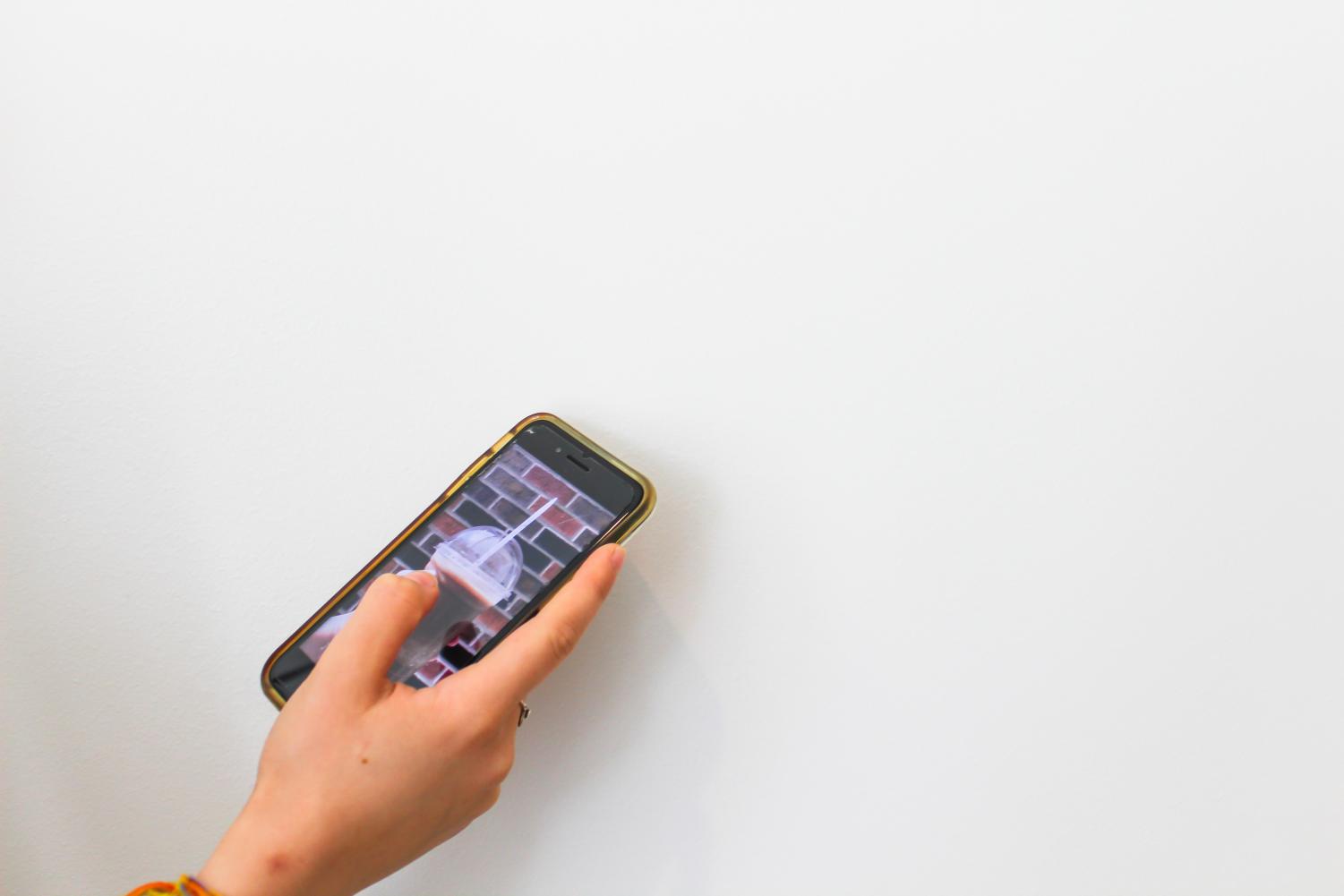 A student holds up a phone with an image of a shake on it. Social media is credited as an influence on diet culture. photo illustration by Anna Ronan

A student holds up a phone with an image of a shake on it. Social media is credited as an influence on diet culture. photo illustration by Anna Ronan

Weighing the risk: a change in diet culture

Diet culture is a phenomenon that encourages people to diet and lose weight. With the rise of social media, diet culture is receiving more attention.

by Ella Norton and Anna Ronan

Senior Annie Kelley was in 6th grade when she began dieting. She noticed other girls in her grade had started eating healthier lunches and decided that she wanted to follow their example. She began eating more fruits and vegetables, stopped eating red meat and stopped drinking dairy milk.

“I was like ‘oh, they’re pretty, they eat healthy, I need to do that too,’” Kelley said. “So that’s what I kind of did, I just followed in line.”

Since then, Kelley has eaten healthier meals with organic food.

“I have a little bento box, it has four sections, and I put fruit in two sections and pita chips or bread and some proteins in the other sections,” Kelley said.

“With my own friends, my own family, within our society, mainstream media,” Whitcomb said. “There’s so much to say about [diet culture] that it’s hard to put it in one sentence.”

Whitcomb does not consider herself an expert in knowledge about dieting. However, she recalls that there were only a few marketed ways to lose weight in the recent past. Recently, she has noticed the market for diet culture expanding.

“I think there were two or three things you could do, like Weight Watchers, and that was kind of it for a while,” Whitcomb said. “Now, it’s just blown up.”

According to Harrison, a well-known dietician who hosts a podcast called ‘Food Psych,’ “Diet culture is a system of beliefs that: worships thinness and equates it to health and moral virtue, which means you can spend your whole life thinking you’re irreparably broken just because you don’t like the impossibly thin ‘ideal.’”

However, Harrison along with Turnbull, doesn’t want to shame individuals who diet. In an article titled “Anti-diet Does Not Mean Anti-dieter” Harrison says she instead wants to focus on “dismantling the oppressive, fatphobia, food-phobic (aka diet culture) that uses lies and manipulation and fear to make us want to lose weight and eat ‘perfectly.’”

Along with Harrison’s definition,Turnbull believes that diet culture is an overarching umbrella term that can lead to unhealthy habits.

“What kind of falls under that umbrella is chronic dieting, wellness diet, disorderd habits, overexercising, all of those things we’re ‘better for,’” Turnbull said.

Sarah Horton, a registered dietician in Kansas City, credits media with perpetuating diet culture. Though TV and magazines were the culprits of the recent past, the introduction of social media is a large influence on the impressionable youth since diets are everywhere, which she believes leaves a lasting effect.

“Since Instagram has been around, you see all these Instagram influencers who are stick thin and posting everything they are eating all day, people doing YouTube videos about it,” Horton said.

Along with social media influencers who share their diet, some influencers also promote products to keep “healthy” such as slimming tea and diet suppressant lollipops. Horton says she has no respect for those who promote these products.

“[The influencers] don’t know anything about nutrition and they’re pushing these products which are very dangerous and they haven’t been researched,” Horton said. “They’re still contributing to that thin ideal, the diet culture.”

For Kelley, her liking to social media has played a major role in her dieting history.

“I have always looked at social media and been really enthralled with it,” Kelley said. “So I would look at girls on Instagram and be like ‘I wanna eat healthy so I can look like this, or make people think I’m like this.’”

According to an article about the media and eating disorders from the British National Centre for Eating Disorders, clean eating all over social media has fostered Orthorexic, which is defined as “pathological obsession for biologically pure or right food which leads to import dietary restrictions… At its most extreme, health suffers, other interest diminish, relationships are affected and quality of life is impaired.”

Horton also believes that our culture has an obsession with obesity, which can lead to people developing an unhealthy relationship with food or even an eating disorder.

“The main focus in society is obesity, preventing obesity, obesity is bad and having extra fat is bad, which it’s not,” Horton said. “Eating disorders are way more prevalent than obesity.”

Horton believes it’s hard for the person themselves to realize that they’re developing an unhealthy relationship with food. She says girls should be careful if they notice themselves practicing disordered eating habits, such as constantly thinking about food or counting intakes.

For Whitcomb, diet culture manifests in a different, more dangerous way when it comes to disordered eating. She believes that once dieting goes too far, it can be dangerous for girls’ mental and physical health.

“I don’t think that’s inherently bad if it’s about taking care of your body,” Whitcomb said. “If you’re skipping meals, if you’re eating an extremely low number of calories, if your image of yourself is wrapped up in your weight or clothes size, if those things are by far the primary objective, that’s what can become unhealthy.”

However, Whitcomb also believes that the word “diet” isn’t appropriate when it comes to weight loss goals.

“When people say “I’m on a diet,” that is tricky,” Whitcomb said. “If you want to eat different and stay healthy, that’s a lifestyle change, not a diet. If we can shift our perspective from ‘I need to not eat sugar for six months,’ to ‘I need to eat a limited amount of sugar to maintain an appropriate, healthy amount in my body.’ I think if we could shift it, our diet culture wouldn’t exist as much, it would be a lifestyle change.”

Kelley chooses to diet not only for beauty standards but for an overall healthy lifestyle, both physically and mentally.

“I will look at models and say ‘oh my gosh, they’re so pretty, I want to look like that,’ and I will eat healthy for that,” Kelley said. “And then as a lifestyle, I will eat healthy for me. I always feel worse when I’m not eating healthy, so if I eat just a bunch of junk food, I feel disgusting and really sluggish and tired. I’m not as stressed when I eat healthy foods.”

Instead of dieting, Turnbull prefers the concept of intuitive eating. Intuitive eating is based off a book by two dieticians, Elyse Resch and Evelyn Tribole, who believe that dieting does not work. Turnbull said that intuitive eating focuses on emotional, mental, physical, financial and spiritual health when making food choices which Turnbull prefers. She cautions against dieting of any kind as she believes diets can be extremely dangerous and can be a gateway to developing eating disorders.

“Any kind of dieting is not safe and can lead to a mental health illness that has physical health implications and can lead to death,” Turnbull said. “Dieting does not equal health because health promoting behaviors do not cause emotional, physical, mental distress and that is what dieting does.”

“You don’t have to do these disordered behaviors,” Turnbull said. “Take care of yourself and you are worthy as you are.”

Turnbull aims to validate the struggle of young teenagers, particularly females in this toxic culture.

“I think that it’s going to take a lot of lifting each other and empowering each other that you’re more than just a body and your weight does not determine your health and that you deserve to live a really nourishing, fulfilling life outside of your body,” Turnbull said.

Turnbull recommends initiating a conversation if students notice people struggling with unhealthy eating habits. However, if the situation is currently or becomes dangerous, a trusted adult should be notified immediately.

2 Responses to “Weighing the risk: a change in diet culture”