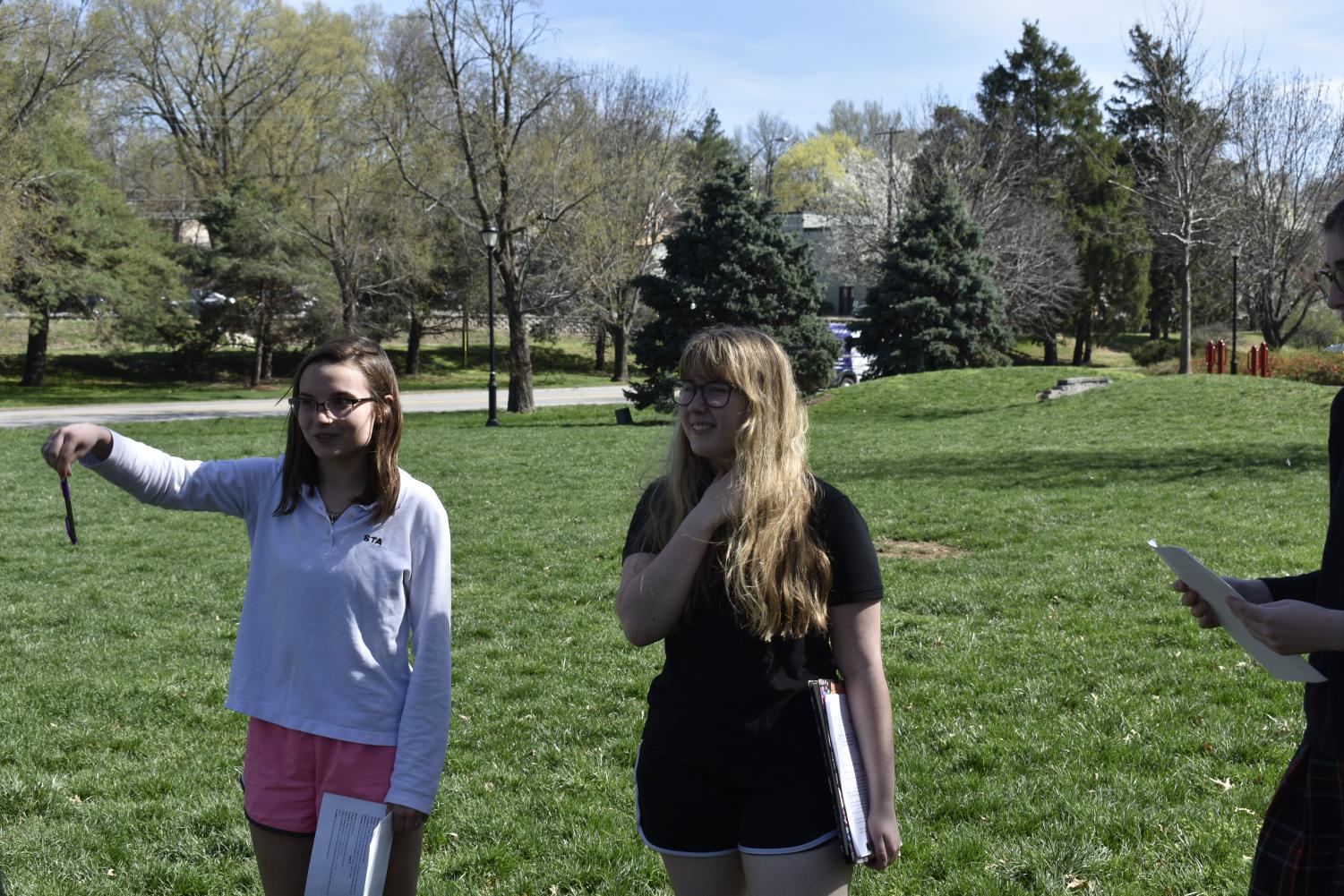 StuPro Directors Lauren Daugherty and Grace Marshall critique the actors in their small cast at rehearsal April 9 at Brookside park. The two Seniors StuPro is called “A Day in Pompeii” and will include both singing and dancing. photo by Kendall Lanier

StuPro Directors Lauren Daugherty and Grace Marshall critique the actors in their small cast at rehearsal April 9 at Brookside park. The two Seniors StuPro is called “A Day in Pompeii” and will include both singing and dancing. photo by Kendall Lanier

Student Productions: from playing to producing

Seven seniors direct five, one act shows for this years Student Productions, known as Stupros. They are annually held to allow seniors try directing and producing instead of performing.

While seniors get ready for their last few months of high school, seven seniors prepare to direct and produce their own show for Student Productions, known as Stupros. They are held every year for seniors to write their own 10 minute play or musical. This year there are five different shows written by seven seniors. The productions vary from drama, suspense, historical, comedy — there’s even a musical.

Daugherty and Marshall started to write their stupro back when they were sophomores, by combining many different stories from the Latin one textbook.

“I had to translate the entire Latin one book before we could write anything,” Marshall said.

Daugherty and Marshall chose to make their show a musical, Daugherty wrote all of the music herself. Daugherty though she wrote her own music was inspired by other musicals.

“For the barber shop scene I was inspired by Hamilton’s Farmer Refuted,” Daugherty said.

Malone’s show was inspired by her AP U.S. History class, when she was assigned Emma Goldman as part of a class activity.  Her show is a historically dramatized story that tells the life story of Emma Goldman, an anarchist in the early 1900s.

“Emma Goldman’s amazing story inspired me then and continues to now,” Malone said. Emma Goldman’s inspired Malone to inform the STA community about this revolutionary woman and social activist.

Terry has been writing her show since she was sophomore, she is basing the production off an encounter with an uncomfortable man. She took this event, dramatized it, by making it creepier and a psychological thriller. Terry hopes that her creepiness and darkness will give her production an edge.

“This woman, her name is Katrina, and she goes on this date with this guy,” Terry said. “They get along really well and things are going smoothly. Then all of a sudden weird things start to happen, and things take a turn.”

Ficklin was inspired to write her story while driving and listening to the radio, when she imagined being confronted through the radio, That’s when she came up with an idea for her show.  It is about a woman who is confronted by her own mortality by voices on the radio. She has been a part of STA theater since she was a freshman, she thought that it would be a full circle moment if she wrote her last show at STA, instead of performing in it.

Ficklin explained that she spent a lot of time letting the idea develop in her head before she wrote anything down.

“I spent three crazy days and nights trying to get the specific words and dialogue down on paper,” Ficklin said.