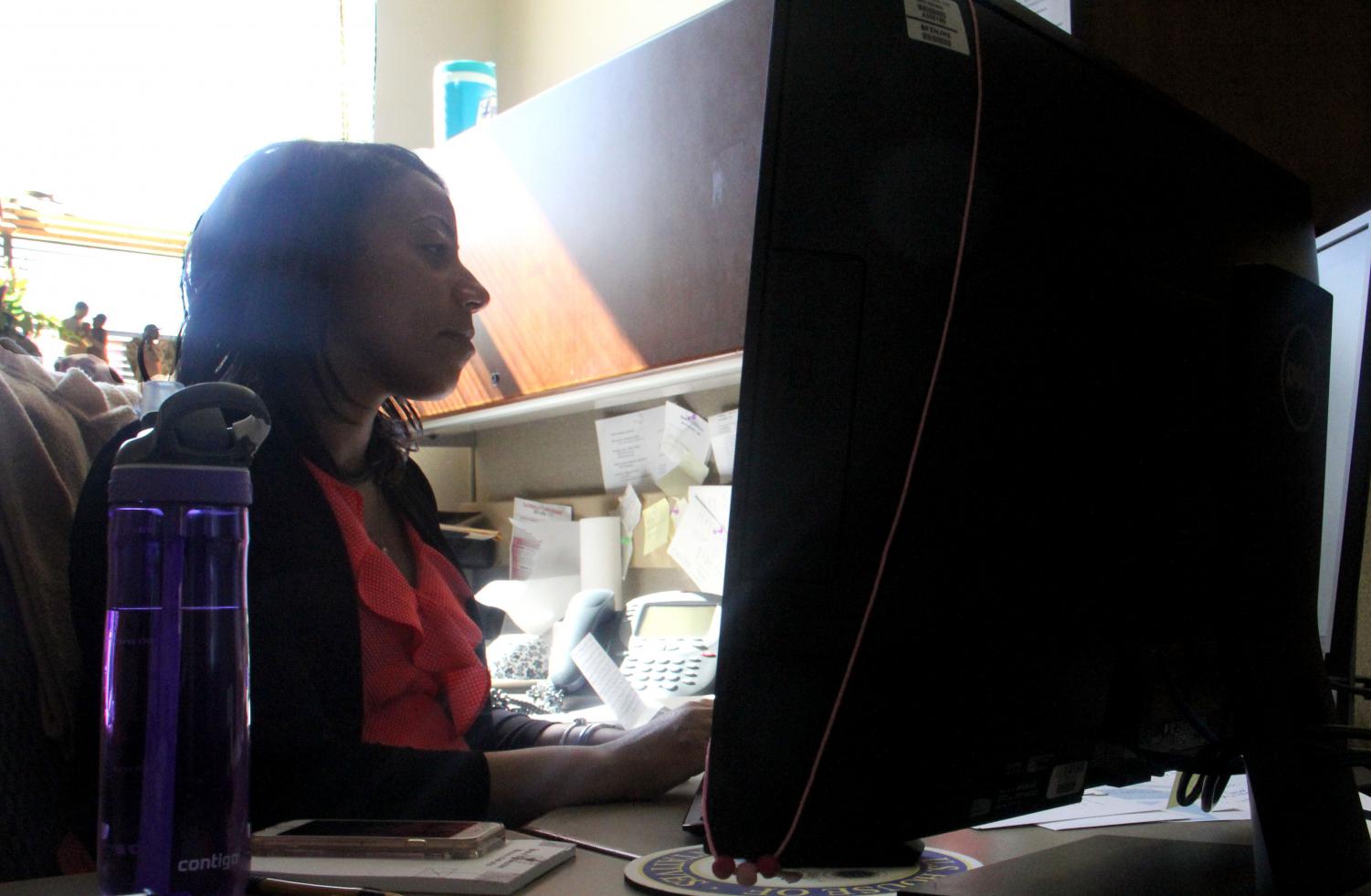 Long manages her email in the 5th Congressional District Office April 8. When Congressman Cleaver is out of town, she spends her time coordinating events and meetings. photo by Julia Kerrigan

Long manages her email in the 5th Congressional District Office April 8. When Congressman Cleaver is out of town, she spends her time coordinating events and meetings. photo by Julia Kerrigan

STA 2003 alumna Holly Long has spent the past 14 years working for the Missouri 5th Congressional District Office using her skills in Organizational Management.

In the spring of 2004, Holly Jenkins took the D.C. Metro from Howard University’s campus to the U.S. Capitol for her first day as an intern for the newly elected Congressman Emanuel Cleaver. Jenkins, who has since married and now goes by Long, had graduated from St. Teresa’s just one year before. Long recalls feeling slightly intimidated and overwhelmed as she walked among the tourists, Capitol Police and congressional staff members bustling through the centuries old U.S. Capitol. She spent the day answering calls from constituents and writing letters among Capitol Hill veterans and newbies alike.

Long heard about the position from her father, a long-time friend of Emanuel Cleaver’s. He had run into him at the airport and mentioned that his daughter was just starting out at Howard. Long interviewed and was hired as an intern to begin that spring.

When she came home for the summers during her college years, Long worked in Cleaver’s Kansas City offices at 31st and Main and returned to the Hill offices during the school year. During high school and in those initial years of college, Long thought she wanted to become an entertainment lawyer, after growing up with magazines like Jet and Ebony around the house.

However, by the time Long was ready to graduate with a major in Political Science and minor in Legal Communication, she was unsure that law was the path she wanted to take. She ended up attending law school for one year before leaving.

“I had always been very academic driven,” Long said. “But I was tired.”

It wasn’t an easy path to step off of, however, as Long’s father was an attorney and had always wanted her to litigate, and Long herself had dreamt of one career for so long. The first person she told about her decision to leave was Congressman Cleaver. Instead of telling her parents, Cleaver told Long a story from Genesis where Jacob wrestles with an angel and demands to be blessed.

Long ended up going to work full time on the Hill, and stayed in D.C. until 2010. Still, a sense of obligation to the path of law called to her. When she moved back to Kansas City, she planned on attending UMKC Law to obtain a law degree.

“All of my life, everyone had told me, this is what you’re going to do,” Long said.

She eventually realized a law degree she had no intention of using was not worth the student loans, so Long continued to work full time at Cleaver’s office. When she saw the description of a Organizational Leadership program at Baker University, she knew it was exactly what she had been working toward. The course taught leadership styles, organizational structure, organizational development, coaching and office atmosphere development skills.

Long attributes her love of organization and structure to her education, especially the opportunity to manage her unstructured periods at St. Teresa’s.

“It taught me time management, it taught me ‘let’s not waste this precious time on something I could knock out now,’” Long said.

Long completed her Master’s in Organizational Development in 2013, all while working full time. Today, she works as Director of Operations at the Missouri 5th Congressional District Offices, and has been working for Cleaver for the 14 years he’s been in the House of Representatives. Long has two types of work days — planning periods before her boss comes into town and the weeks or weekends he is in Kansas City.

“My lovely boss is constantly on the move,” Long said. “So those days are crazy bananas.”

Just the week before, Long drove the Congressman to a last-minute meeting at his old parish, St. James Missionary Baptist Church at 55th and Main, and then to a commitment at 18th and Baltimore just 45 minutes later. Long had even planned to leave early that day, but she said that a packed schedule is just the nature of Cleaver’s time in Kansas City.

“You just have to learn to be graceful and to flow and to be flexible,” Long said.

She enjoys the days spent planning for these jam-packed days, making calls and sending emails to plan commitments and determine which staff member will attend which meeting. Ensuring the office runs smoothly doesn’t always just rely on scheduling, though — Long cites the time she taught the Congressman how to enable the “Do Not Disturb” function on his iPhone and how hard it was to find the phone once it was subsequently misplaced. With 14 years in the office, Long has learned from the people around her.

“This office has taught me flexibility and it has allowed me to sharpen my leadership skills that are already had,” she said. “It just kind of helped me blossom. All the staff, from former staff to current staff, have taught me that.”