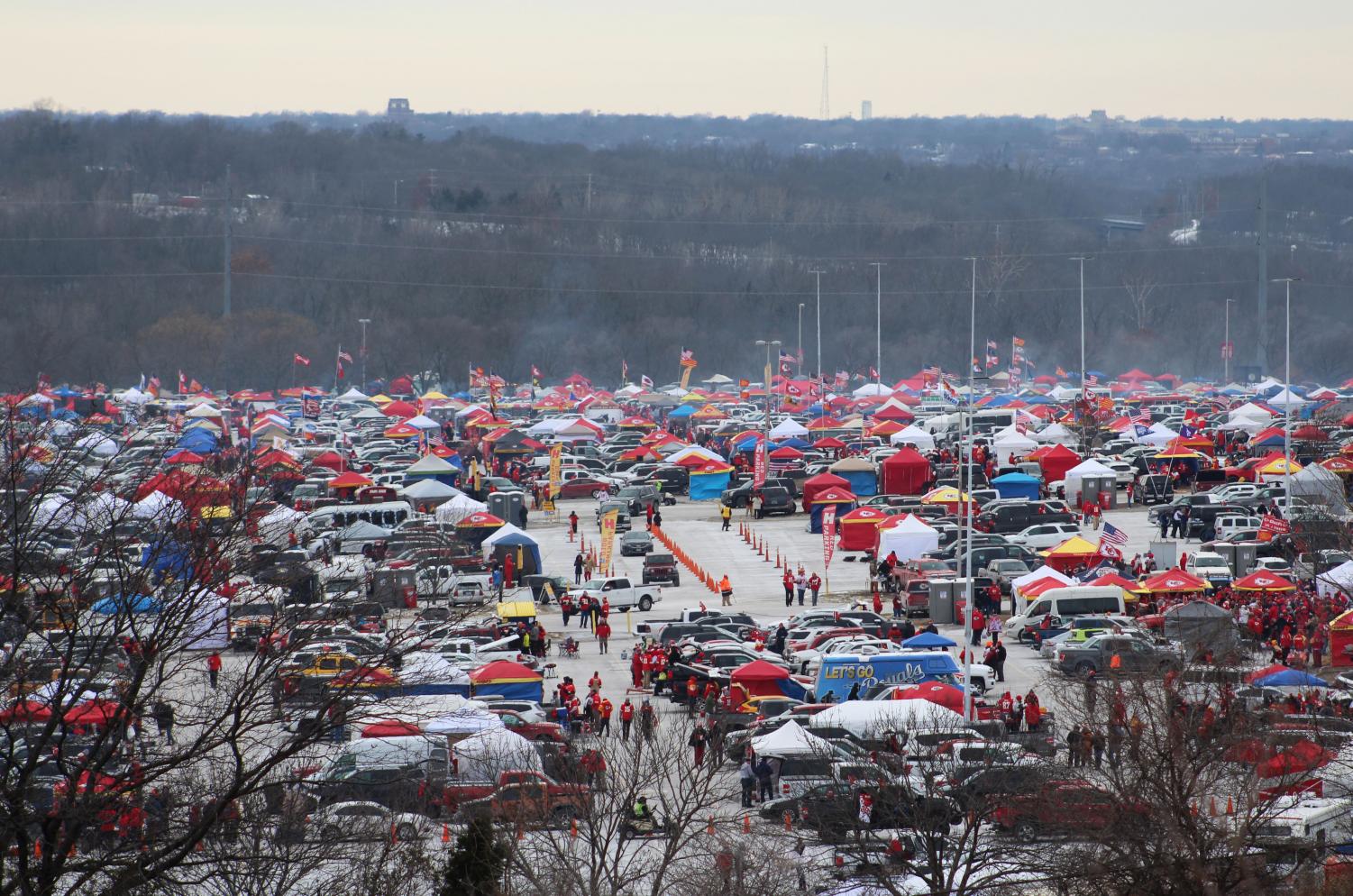 Tailgaters gather in Lots G and H at Arrowhead Stadium for the AFC Championship Game Jan. 20.

Tailgaters gather in Lots G and H at Arrowhead Stadium for the AFC Championship Game Jan. 20.

Following the most successful Chief’s season in over a decade, The Dart looks into different perspectives from around the community to analyze the wide-ranging impact and implications of successful professional sports teams on a city.

by Lily Hart and Mary Massman

January 20, Senior Gabriella Mesa put on four pairs of pants, five shirts, and a red sleeping bag. She was among 77,034 people in 20-degree weather attending the American Football Conference (AFC) Championship Game at Arrowhead Stadium where the Kansas City Chiefs would face the New England Patriots. This game would secure the Chiefs’ spot in what would be their first Super Bowl appearance since 1970 when they won their first and only NFL title. For a city with a losing streak, this could change the game when it came to city spirit.

“Loud,” Mesa said. “Adrenaline. Excitement. You could almost feel what the game meant to everybody.”

Although she attends almost every home game with her dad, she admits that there are many things you miss when you’re at the game rather than watching it on TV.

“When Tom Brady threw the interception, we all thought it was the last play,” Mesa said. “There was a 10 second delay between when the flag was thrown and when everyone in the stadium realized that the flag was thrown. Even the players didn’t know.”

This confusion and momentary feeling of winning intensified an already heartbreaking loss for Kansas Citians who still had to make the cold trek home.

“When we got the interception, everyone started celebrating and my dad was chanting ‘Super Bowl’ and everyone was hugging and high-fiving,” Mesa said. “There was a whole 10 seconds before we realized we weren’t going to the Super Bowl. That hurt more than I think it would have if we had just seen the flag from the beginning.”

Despite the loss, Mesa still has hope for next season and so does stadium tour and ticket sales seasonal assistant for the Chiefs Lauren Lanter.

“I definitely think this is just the beginning,” Lanter said. “For one, we’ve made it farther than we’ve made it since 1993. People always thought we were cursed…It’s a good stepping stone so the next hump is winning the AFC championship.”

Lanter has worked with the Chiefs since August and handles their two revenue generating duties apart from selling tickets: organizing stadium tours and coordinating the Arrowhead tailgate suites during the season.

“Since I have two brothers, that was kind of always the thing that our family did together was go to baseball games, football games,” Lanter said. “I played sports growing up so it was always something that was the center of my family life. So then, when I was in college it clicked that I could get paid to talk about and work around sports.”

She attributes the Chiefs’ success this season to quarterback Patrick Mahomes.

“[Mahomes is] a lot different than the quarterbacks we’ve had in the past,” Lanter said. “Alex Smith was very reliant on the run-game, so shorter passes and then running backs running [the ball] shorter distances. Mahomes can basically throw the entire length of a football field with ease. The running backs and tight ends are utilized a lot more and the receivers as well.”

In her line of work, Lanter has observed firsthand the effects that a successful pro sports team has on a city.

“I see that the tours are a lot more high-demand now that the team is good,” Lanter said. “Our sales goal was far exceeded this year just because we’re almost always packed when we have a home game. In general I think the fan engagement is obviously very high this season.”

Despite the Chiefs’ previous losing streak and alleged “playoff curse,” in 2006 voters approved a sales tax increase to help pay for renovations for Arrowhead Stadium and Kauffman Stadium, home of the Royals, according to ESPN. The fear was that without “state of the art” facilities, both teams would have the freedom to leave Kansas City in 2007.

However, 2006 wasn’t the first time taxpayer money has gone to support the Chiefs. According to the Kansas City Star, in 1967, Jackson County voters approved general obligation bonds to build stadiums for the Chiefs and the Royals, together estimated to cost $43 million, a number that rose considerably due to cost overruns and project delays.

Former Chiefs linebacker Willie Lanier considers both the new stadium “coming to life” and the Chiefs’ 1970 Super Bowl win as what set Kansas City on pace to become more of a major league city. This made the tax burden worth it.

However, the benefits of a high-profile sports team don’t solely go towards the players. Local companies, such as Kansas City based t-shirt company Charlie Hustle, see a clear benefit for the local economy. Charlie Hustle experienced a surge in sales after a Royals play-off game in 2014, when actor Paul Rudd claimed he wouldn’t take off their “KC Heart” icon shirt until the Royals lost.

“You look at January, and most people want to be inside and don’t really want to go out because of the elements,” Chief Marketing Officer of Charlie Hustle Katie Martincinch said. “With the Chiefs doing well, and playing more weekends, I think there’s more socializing and spending. We see on the retail side of things people get in this excitement phase, and they don’t really care where their dollars are going.”

Still, Martincinch admits that the brand is wary of becoming too economically reliant on the success of the Chiefs or Royals.

“We try to distance ourselves so that it won’t be too detrimental if they lose,” Martincinch said. “We all know sports can be hot and cold at times, so we’re also trying to build our brand around other civic establishments that aren’t so up and down, because that can be an exciting game to be apart of when you’re winning, but if it’s your sole bread and butter, it makes depending on it really tricky.”

Outside of potential economic benefits and risks, the Chiefs affect and engage with the community through player and franchise outreach. Lanier won the NFL Man of the Year award in 1972. According to the NFL, this honors an NFL player for “excellence on and off the field and significant impacts in their community.” The Chiefs have had more players named NFL Man of the Year than any other team in the league.

“It’s worth giving back and trying to be positive to assist others in achieving their goals,” Lanier said. “It becomes a positive way to show your appreciation to those who come to recognize you. You have an interest in where you work, where you live, where your kids grew up, where people ahead of you have done things that are positive outside of the playing of a sport.”

This outreach continues with player initiatives. Current quarterback Patrick Mahomes is forming a charitable foundation for kids at risk. In addition, the Chiefs Ambassadors, a group of former players from throughout the club’s history, support the city through scholarship programs, charity golf tournaments and numerous charitable visits and appearances.

According to the Chiefs’ website, the Ambassadors are the only group of their kind in the NFL and inductees into the group are hand-picked based on tenure and their willingness to participate in Ambassador outreach events and meetings. Former Chiefs safety and Hall of Fame inductee Deron Cherry recalls being drawn to the program because of the camaraderie of the group and the opportunity to give back to Kansas City.

“I think the Ambassadors are impactful because of the connection for the community of former players who played here, a lot of them very successful on the team,” Cherry said. “When current players aren’t available, former players can step in and help out and have an impact on the community, going to hospitals, visiting patients, supporting multiple organizations that are affected by many different things.”

Cherry also emphasized the importance of current professional athletes using their platform to promote positive change in the community or drive people to Kansas City that have an interest in making the city better. He feels that these teams should be adequately supported in order to make a city more recognizable or visible and uphold its identity as a major league city.

“I think current players have a huge platform that they can use to go out to support those causes that are close to them and causes that affect many human beings in their daily life,” Cherry said. “Patrick Mahomes is a difference maker, and you don’t find them every single year. We have to take advantage of his talents and his leadership.”

Lanier, considering these philanthropic efforts, doesn’t feel the Chiefs can negatively impact the city since they serve a larger purpose in the community and wins take time.

“It’s people who are reaching to express their skills and their ability with no guarantees, and what it does, it gives the indication that effort must be extended constantly to have an outcome,” Lanier said. “So I think the positives is not just the win itself, but it’s all the other benefits that come from the team being in a community, the individuals raising families in the community, being able to go to schools and churches and other social organizations, being a part of everything that goes on and trying to continue to inspire.”

Lanier is still hopeful in face of the AFC Championship loss that the team will carry their skills into the next season and positive they will continue to give back to the community and keep on what he calls the “never-ending quest” to reach the Super Bowl for Kansas City.

“I have a ring that I wear today from the Chiefs win in 1970 that’s 49 years old,” Lanier said.  “So the reality is that the Chiefs have not achieved another ring like this in 49 years, but they’ve continued the effort year in and year out, trying to present the best product, trying to offer the fans of Kansas City a competitive organization as one that was just the most exciting of the NFL season.”

One Response to “Breaking the curse: KC Chiefs affect change through achievement”