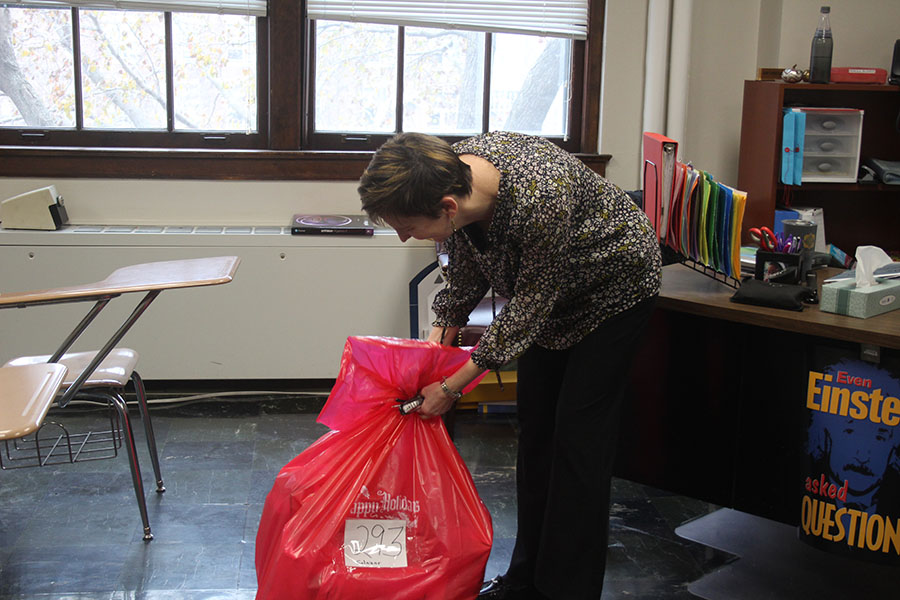 Math teacher Belinda Toma moves her bag of toys that her advisory has collected Dec. 5. Several advisories throughout the school have gathered toys for families who can not afford christmas presents. photo by Beatrice Curry

Math teacher Belinda Toma moves her bag of toys that her advisory has collected Dec. 5. Several advisories throughout the school have gathered toys for families who can not afford christmas presents. photo by Beatrice Curry

STA focuses on giving back during the holiday season

Advisories and other groups at STA have decided to adopt families and volunteer in order to help those this time of year who are less fortunate.

Social studies teacher Anne Papineau has wanted to do good for others during the holiday season for a long time. But the planning for a big service project with an entire advisory is hard work as shown by other

advisory projects, and STA has never required anything like that before. However, this year Papineau received the email from STA administration she had been waiting for.

“I’d thought about [service] before, but never had I gotten an email about it and someone actually reached out with contacts in order to get it set up,” Papineau said. “As a teacher there’s so much that goes into your day, it’s easy to kind of forget about these things and get caught up with other stuff. To have someone else who reached out and say they can get this all figured out, I think that helped a lot.”

This year, Papineau and her advisory decided to adopt a family and give them presents that they previously could not afford.After talking with STA president Nan Bone, they found a family through the Seton Center, a non-profit organization in Kansas City that serves as a thrift store and food pantry. The family has six children. Social studies teacher Casey O’Flaherty’s advisory is providing presents for the older kids, and Papineau’s advisory will take care of the younger ones.

“I think it’s really powerful, especially when we’re a school that has so many means and wealth to help families who are clearly impoverished and are in a position where they need a lot of help,” Papineau said. “We can buy Christmas gifts and make a child’s Christmas this year.”

Senior Kari Flynn, a member of the O’Flaherty advisory, believes that it’s extremely important to give back when you’re at a school that has the opportunity to.

“[Presents] are something we all kind of take for granted during the holidays, and I think we need to stop and think about what our actions could do for others,” Flynn said.

Students in each advisory have individually contributed $7 for presents. Even though their advisories won’t get to meet the family due to privacy concerns, Papineau is excited about what their actions have been able to do and the impact they’ve created.

Their advisories are not the only ones who have decided to adopt a family this year. The Black Student Coalition, a group whose goal is to start a conversation about equality and the role of race at STA, decided to adopt a family for their service project but have not yet found a family to adopt.They plan on finding one through a local church and collecting $10 from each coalition member for presents.

Senior Erris Pierson, president of the coalition, believes buying gifts for the disadvantaged is a great way to bring more attention to the Black Student Coalition.

“We’re trying to get our name out, and we want to do something that’s going to make us stand out,” Pierson said. “I think giving in the holiday season is very important because STA is about service. So if we’re going to be part of our school, we have to do what our school is doing which is serve.”

Pierson originally wanted to adopt a family around Thanksgiving, but the timing for it was extremely limited as the idea was brought up just a couple weeks before the holiday. She wanted to make sure they had plenty of time to arrange the process so they opted for Christmas instead.

After helping out with this project, Pierson believes every advisory should contribute to the community in some way and has started to get her own advisory involved in giving back.

“My advisory is not really a part of this, but I think that I’m going to try and make them write cards to the elderly or something like that because it truly does do something,” Pierson said. “And if you don’t have a family and you don’t really have that comfort, it shows you’re being thought of. I just think it’s sweet when everybody comes together and serves, especially during holidays.”

Just like Papineau’s advisory, Pierson wants to continue the coalition’s service projects beyond just the holiday season and make them a regular experience for all of its members.

“I think that we can all grow,” Pierson said. “It’s good for our club to say we’re going to do one service project per semester, and it should be a goal for every club and every advisory to do one thing to help the community or help your school.”