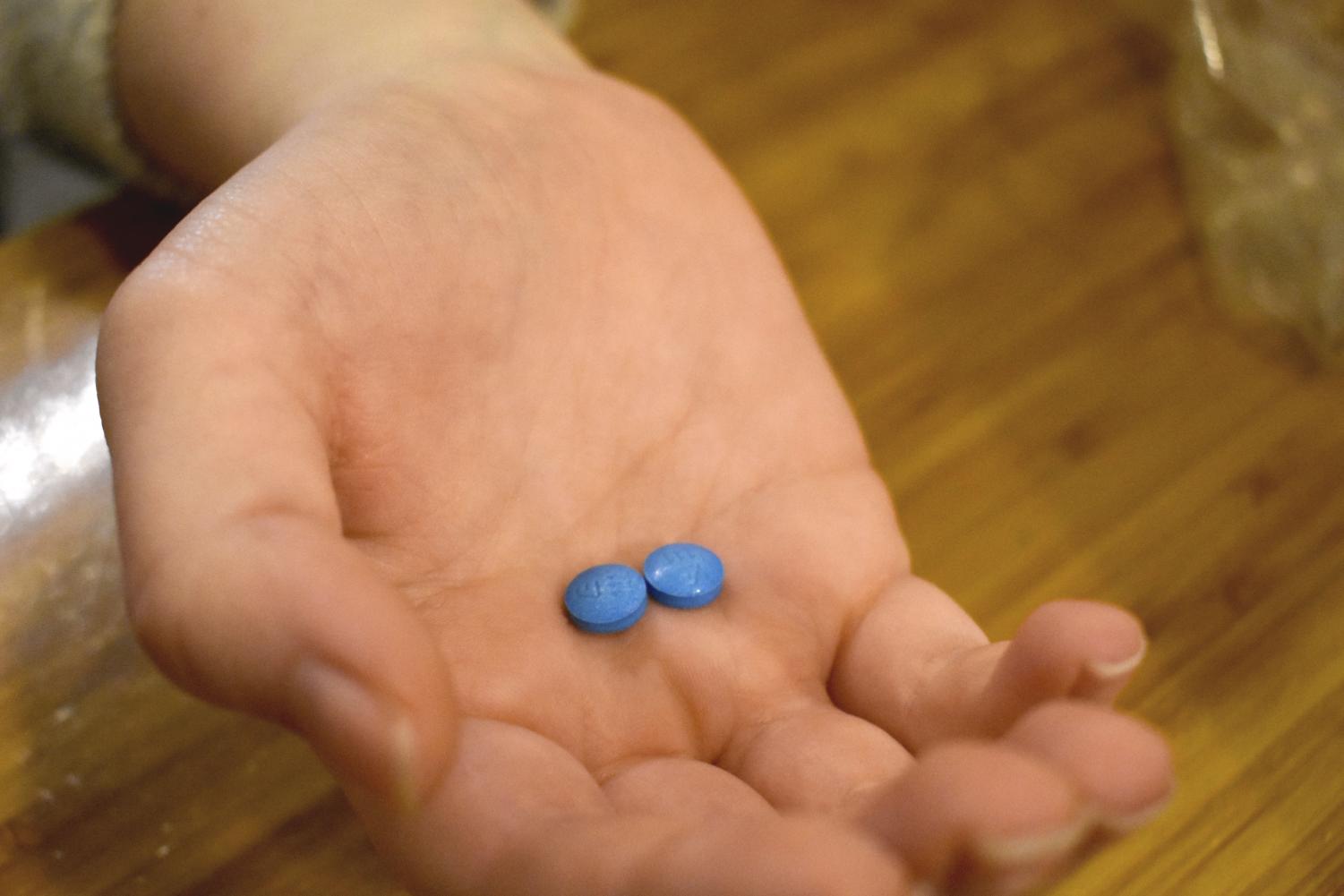 Adderall is a stimulant prescription drug used to treat ADHD and ADD. However, several students use it unprescribed, disregarding the potential health effects.

“A thousand miles per hour,” is how junior Anne Chapman describes her Attention Deficiency Hyperactivity Disorder, or ADHD. Her mind jumps from thought to thought, thinking about upcoming events or a movie she watched as she tries to do her math homework. She struggles with sitting down so she’d rather bake then watch TV.

Chapman was diagnosed with ADHD in January of her freshman year. Coming from a family with a strong genetic background of ADHD, Chapman feels like her parents have always known that she might have it.

“I’ve always had a lot of trouble focusing, ever since I was a young kid at school,” Chapman said. “I was always just the really talkative, hyper, crazy one.”

According to the National Institute of Mental Health, ADHD is “a brain disorder marked by an ongoing pattern of inattention and/or hyperactivity-impulsivity that interferes with functioning or development.” The Centers for Disease Control and Prevention did research in 2016, which found about 6.1 million children in the U.S. have ADHD.

However, Chapman didn’t begin to receive treatment until May of her freshman year as she underwent what she called “the treatment process.”

“The treatment process was really just taking the medicine and kind of just adapting to when I’m going to be on my best mindset,” Chapman said. “It’s a pretty strong stimulant to your mind; I had to work on what my body can take.”

Chapman started with Vyvanse, a nervous stimulant used to treat ADHD, but felt it wasn’t a good fit. Her doctor then suggested she try Adderall.

Adderall is a nervous system stimulant made up of amphetamine salts that is commonly prescribed to treat ADHD or Attention Deficiency Disorder(ADD). ADD is similar to ADHD but without the hyperactive element.

Chapman now describes her brain on adderall as a sort of “heaviness.” She is able to focus on one thing at a time, without suppressing her creativity.

“Everything is complete,” Chapman said. “[It’s] a more complete thought and outcome.”

While Chapman has been taking Adderall for a little over a year and a half, she believes that it does have an affect on her mood. According to Healthline, the side effects of Adderall include “weight loss, stomach pain, headaches, dry mouth, mood swings, sleep problems and nervousness.”

“It’s not that I’m not happy when I take it, it’s just that I don’t want to deal with outside forces that are causing me to lose my focus,” Chapman said.  “I think sometimes that when people see that, they translate it to it’s me being mad or [Adderall is] making me sad. It’s just making me focused on what I need to be doing when I’m at school.”

Along with mood swings, Adderall also has a potential side effect for heart palpitations. Ashley Simmons is the non-invasive cardiologist at the University of Kansas and has seen several  patients who have faster heart rates at rest or arrhythmias which are irregular heart rhythms.

“Most of the time, a fast heart races so the heart never slows down to rest,” Simmons said. “That can be dangerous over time because that can weaken the heart if your heart is pumping all the time. It can get worn out and you can develop a cardiomyopathy which is basically a low heart function.”

Simmons typically sees heart issues in women who are over 18 or in people who have an underlying or genetic history of cardiac conditions. It is because of the risk of cardiac problems that Simmons finds taking Adderall unprescribed dangerous as people have not been screened.

“Even in the Adderall studies that were performed before it came to market, there were deaths in adolescence and they were typically in kids who had underlying heart disease or who had family history of sudden cardiac arrest or had been resuscitated in the past.” Simmons said. “Adderall is not a safe drug to take, unless you have been screened by a physician.”

Lisa* is one of those high school students who takes Adderall unprescribed. She self-diagnosed herself with ADD a little over a year ago and began taking Adderall every once in a while to help with her workload, anxiety and prep for tests.

Due to the risk of cardiac issues, Simmons cautions against self-medicating until being properly screened.

“I think they should feel comfortable bringing it up to their doctor,” Simmons said. “Then they know they’ve been screened and know for sure if they need it.”

Lisa now takes Adderall when she feel it is necessary as it helps her feel motivated to accomplish things. However,  Lisa said she also feels moody after taking Adderall, especially when it begins to wear off.

“If someone is doing something that annoys me, it makes me more irritated than normal and it makes everyone I’ve seen take it [act] like a zombie, and numbs them out,” Lisa said.

For Lisa, the side effects are worth the risks when she has something big to accomplish, such as finals, ACT/SAT tests or AP tests. However, Lisa doesn’t think this gives her an advantage as it simply keeps her from getting test fatigue and doesn’t affect her score.

“It doesn’t make you smarter which is what I think some people believe,” LIsa said.

Because Lisa is not prescribed Adderall, she gets it from others who are. Chapman said that she has had multiple people ask her for Adderall, but she has never given any to anyone.

“It’s not that I don’t want to help them but it’s really not safe and I would not ever want to put myself in a position where I put people in danger for what they think is for their own good,” Chapman said.

Chapman doesn’t have a problem with people who use it occasionally, although she hopes that they have some sort of guidance to keep them safe.

“Just be very careful because Adderall can mess with people especially if they don’t have that chemical imbalance of ADD or ADHD in their minds–it’s not going to work for them in the long run,” Chapman said.

Chapman thinks that the rise in students taking Adderall comes from the changes in societal and school pressures. She mentioned that there’s almost a belief that people are at disadvantage if you are not on Adderall or Vyvanse in college.

“Since there is something out there that can help make studying easier and better, there’s no reason why people wouldn’t want to take it,” Chapman said.  “A lot of times, people just disregard any bad effects that may go along with taking it whether it’s prescription or not.”

Simmons also mentioned that Adderall prescription has gone up over the last 15 years, but said her ideas on why were more theoretical than medical.

“I think that [ADHD has] either become a more recognized phenomenon or it’s overdiagnosed because of the competitive nature of kids and parents now,” Simmons said. “Most stimulants are going to make you concentrate and help you feel better [but] I think it still should be considered very much a prescription drug and should be used only by those who truly need it and have been evaluated by a pediatrician.”

*Names of students who wish to be left anonymous have been changed.