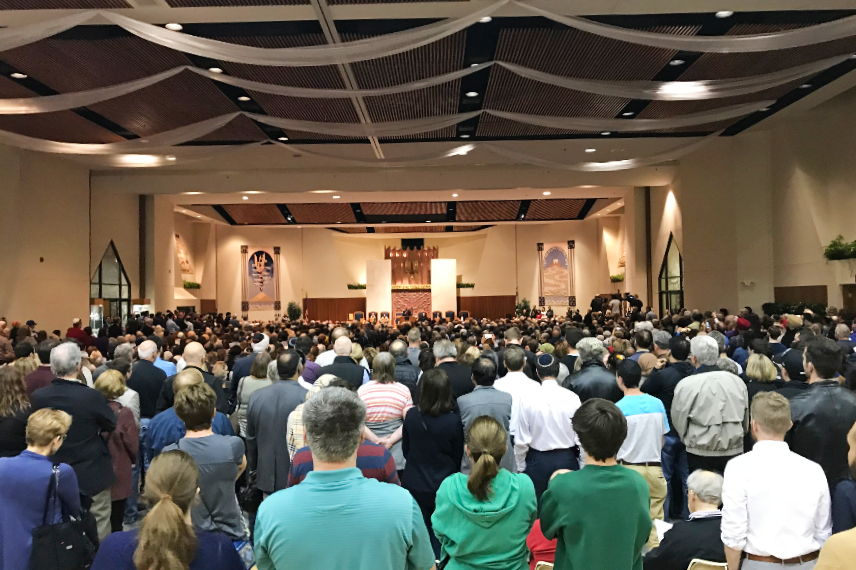 Oct. 29, 2018, a vigil was held to remember the victims of the Pittsburgh synagogue shooting that occurred Saturday morning.

On Saturday morning, Robert Bowers walked into the Tree of Life Synagogue in Pittsburgh, Pa. yelling, “All Jews must die.” Eleven attendees of the morning service were then shot and killed.

The air was heavy as over 1,500 people gathered in Kehillath Israel Synagogue in Overland Park to mourn the loss of the 11 lives.  People of all faith traditions silently entered the synagogue, guarded by three police officers at the entrance.

The sanctuary became packed with people standing and sitting, filling the maximum capacity of the room. All eyes and ears were directed toward the leaders of different faiths and occupations within the Kansas City area. These leaders included rabbis, pastors, congressmen, reverends, CEOs and directors. They consoled the congregation with a clear message of unity. Eleven candles were lit by Rabbi Doug Alpert as each of the victims’ names were recited.

Akhhatr Chaudry, a member of the Jewish Muslim Advisory, stated that “Tonight we are all Jews,” further enforcing the message of unity. Those who spoke at the vigil urged the audience to recognize that this is more than a religious issue, this is a nationwide call to action.

This was one of the many messages that swayed politically during the various speeches. Rev. Rodney Williams, senior minister at Swope Parkway United Church, urged people to head to the voting booths.

“This could have been prevented if we had better political leaders,” Williams said. “This fight is a fight for every person who has come under attack simply because you dared to be who God created you to be.”

The vigil ended with a Jewish prayer of mourning for the victims and their names were recited one last time.