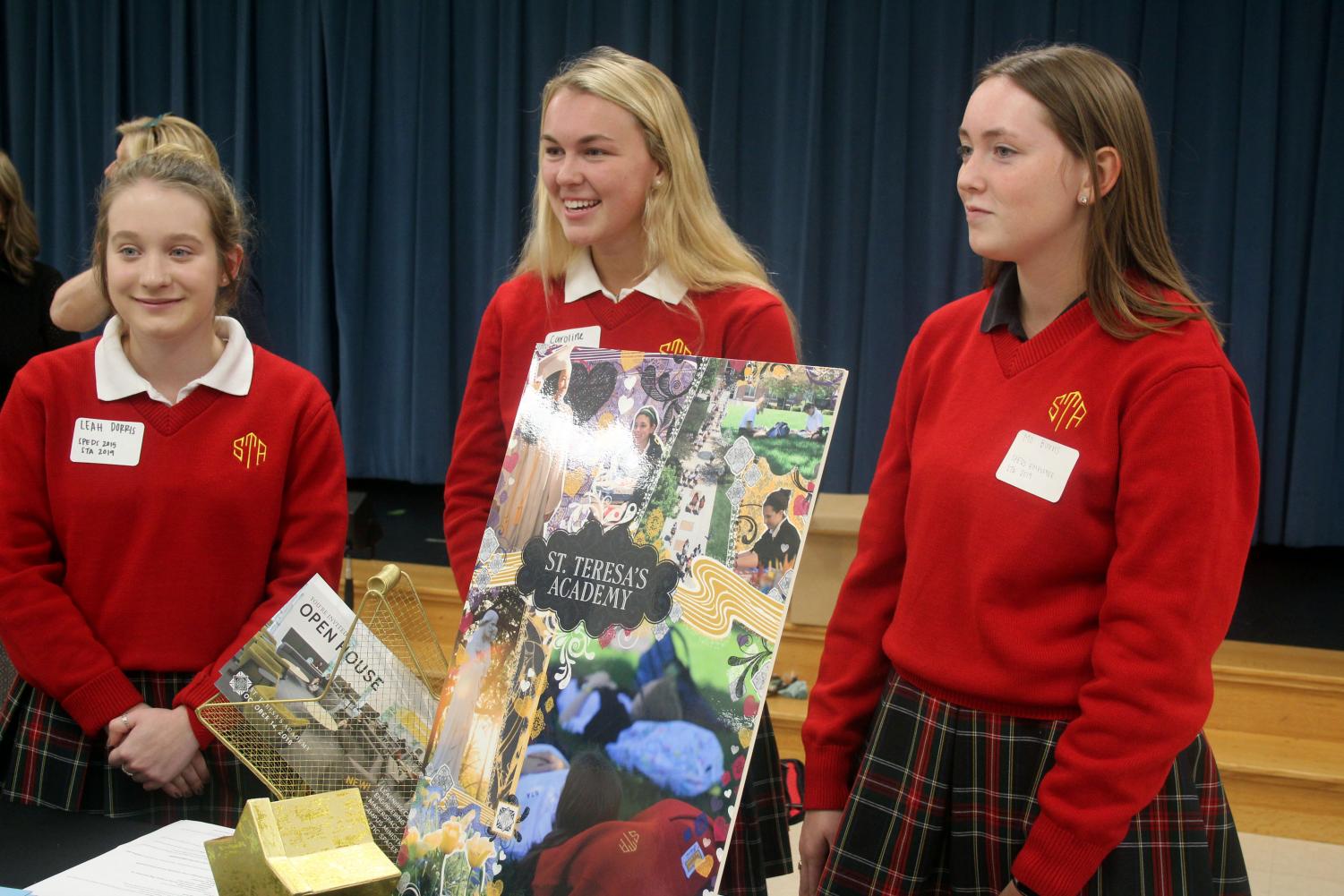 Reaching Out: The Inner Workings of STA’s Recruitment Process

With eighth graders looking toward high school, the admissions department explains how they navigate recruitment in grade schools and the different ways they work to influence a high school decision.

When she walked into Windmoor Center as an eighth grader, current freshman Madeline Sage was not sure how she would feel about being in an entirely new environment. It wasn’t long, though, until she found her friend from dance greeting her with a bag of candy and noticed all the girls in plaid skirts wishing her a good day at STA. As Sage followed her shadow hostess onto the quad, she began to realize how this community could make her comfortable at a school nowhere near her home.

“I don’t know anybody that goes to STA from my grade school,” Sage said. “It’s just me, but shadowing a day at STA will make you realize how much you want to come here.”

Sage, who had never seriously considered STA before she shadowed, attended Kearney Middle School. She would have gone on to the Kearney High School but decided she wanted a change. For girls at schools that do not typically send students to STA, like Sage, learning of all STA has to offer is not a given. The different ways STA works to recruit these girls are often what shapes their decisions.

Admissions director Becky Flores and diversity and inclusion director Brianna Walker take on this responsibility. While both Flores and Walker are new to their respective positions, they both have had experiences that they feel prepared them for their roles. Flores previously worked as president Nan Bone’s assistant for eight years and has had four daughters attend STA. Walker, who was the coordinator of diversity recruitment at Mizzou, feels the work is translatable to a high school level, but on a smaller scale.

“The way that I’ve translated [previous work experience] is making sure that we’re talking to the students in a way so that they can understand what kind of commitment it is to come to St. Teresa’s, and not only for them, but also for their parents and making sure that they can relay that message,” Walker said.

Flores and Walker are not alone in reaching out to prospective eighth graders. They have the help of 92 senior student ambassadors. Student ambassadors work alongside the admissions department to run informational events, attend grade school visits or greet shadows.

“They’re the student face, that first face that girls see, when we go into grade schools, or when they come for open house and get a tour,” Walker said. “The first face that a student really sees is the shadows, that ninth grader or that sophomore. Then, our [student] ambassadors are that confirmation for what STA is, so they get to see everything come to fruition.”

Senior Lucy Whittaker, who has been a student ambassador for two years, feels the position has been rewarding.
“I think the best part about being a student ambassador is that it’s a way for me to give back to St. Teresa’s, because the school has given me so much,” Whittaker said. “I just love this school so much, I want other people to come here and experience the same awesome things that I have.” 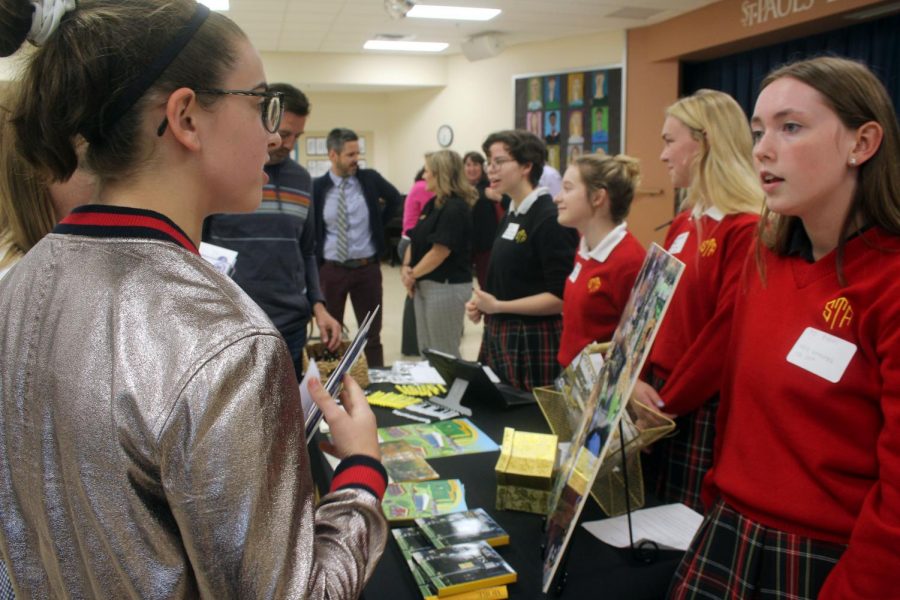 Senior Caroline Penner, who has been a student ambassador for two years, feels that she can use her own experience at STA to impact an eighth grader’s decision. Penner, who attended St. Paul’s Episcopal Day School, recalls spending her eighth grade year deciding if she would be at STA or Shawnee Mission East High School for the next four years.

“I actually shadowed twice because I was so unsure, but something told me that I needed to come here and I’ve absolutely loved it,” Penner said. “I feel like there’s a place for everyone here and I just think that’s really important to let other people know that.”

Penner was able to attend St. Paul’s and talk to eighth graders about STA at the student ambassador grade school visits. This year, Flores and Walker mostly decided where to attend based on the schools that previous admissions director Roseanne Hudnall had attended. They have worked to expand their reach by attending fairs such as the KC Show Me Fair and the KIPP Endeavor Academy Fair, which serve public schools and schools that don’t usually send girls to STA.

Reaching out to schools such as KIPP or Holy Cross Catholic School, which are located in predominantly African American or Hispanic communities, allows Flores and Walker to make concrete efforts to tell more girls about STA. However, there are some limitations to recruiting these girls, such as cost or distance.

“We don’t want to put anybody in a position where they will fail,” Walker said. “We want to make sure that we’re going into those schools and making sure that they know STA is a college preparatory school. Another important part is trying to reach out to parents and seeing how they feel about STA and maybe sending their student to a private school.”

Aside from logistical issues, another significant challenge to recruiting girls from less common schools is the eighth graders’ possible fears of entering a school knowing few students, when many girls from feeder schools have already formed friendships. However, Penner, whose closest friends decided to attend other high schools, saw how easy it was to get past this boundary.

“Coming in and not knowing a ton of people, I was definitely nervous,” Penner said. “I think STA does a really good job of getting people involved with clubs, star seminar and class meetings and it unites the class. I never felt like I was just stranded.”

Sage knew she wouldn’t be at a disadvantage the day she arrived at orientation and saw her class together in one place. As she introduced herself, she realized that everybody was feeling the same way, even the girls who sat by their grade school friends.

“Everybody was kind of nervous, so we were all kind of in the same boat,” Sage said. “I mean, I’ve made a lot of friends from Visitation. Everybody’s so welcoming and open to making new friends.”

Sage came into STA unsure of what to expect, but the friends she has found compels her to recommend the school to any eighth grader, no matter their background.

“[The school] should capitalize on the sisterhood that [students] have here at STA,” Sage said. “Not all girls feel welcome at their schools and not every girl feels that way at school in general.”