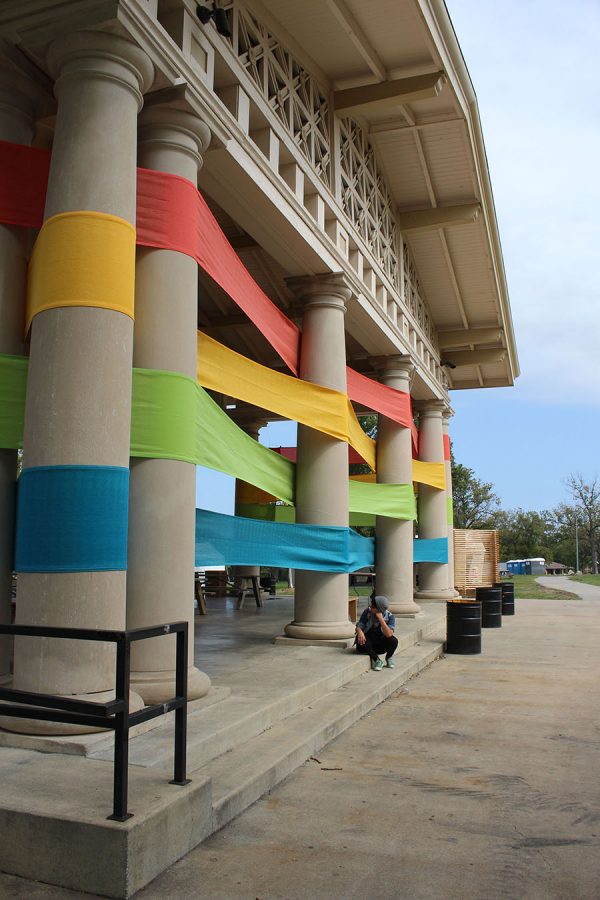 Gallery|6 Photos
The pavilion in “The Village” of Swope Park is adorned with rainbow ribbons Sept. 29. Open Spaces has been open since Aug. 25 and will go until Oct. 28. photo by Maggie Hart

A new arts exhibit in Kansas City aims to revitalize underserved spaces and involve the community. Open Spaces provides viewers a variety of events from outdoor exhibitions to performances.

Driving through Swope Park, one pink tree stands alone among a hill of green. Numerous columns stick up from the hill and an abandoned swimming pool is filled with colorful flowers. These art installations have taken over Kansas City, as well as yard signs that read “Open Spaces.”  Kansas City’s Swope Park is one location of this expansive arts experience. Open Spaces lasts 10 weeks, from August 25 to October 28 and is divided into three categories- The Exhibition, The Village, and The Weekend. The Exhibition includes art installations in various mediums from video animation to sculpture, scattered across the city. Artists such as Trio Bella and Stonelion Puppets participated in The Village, including a variety local musicians, dancers, actors and more. Open Spaces’ The Weekend included performers such as The Roots, Janelle Monáe, and Vijay Iyer Sextet.

Open Spaces was made possible by the collaboration of the city’s Office of Culture and Creative Services and philanthropists, such as Scott Francis. According to the Open Spaces website, the event was structured to, “create a signature festival focused on the region’s artists and cultural organizations, highlighting Kansas City, Missouri’s arts, culture, and creativity.” The festival was implemented as a component of a 10-step cultural plan, made possible by supporters.

Keli O’Neill Wenzel, an STA alumna and the project producer of Open Spaces.

Wenzel noted the unique components of Open Spaces like the installations scattered throughout Kansas City as well as the performing arts.

“It’s combining all forms of art from spoken word to puppetry to bands to hip-hop and everything,” Wenzel said.

As a first-time event, Open Spaces creates a distinctive viewing experience for visitors. It utilizes an app “Open Spaces,” which was designed to provide details about artists, local transportation and connect visitors with interpreters. 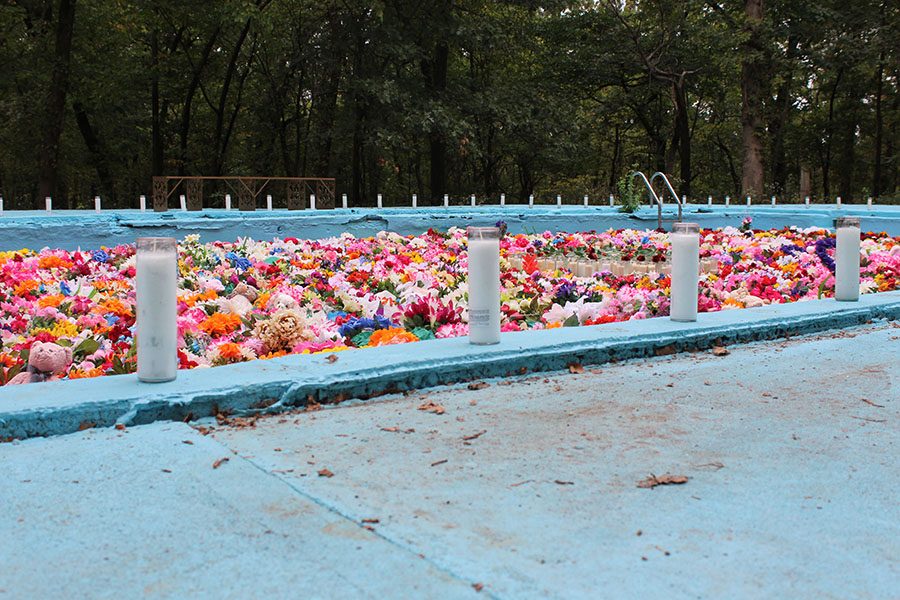 Gallery|4 Photos
“...Called Up” is an installation that revamped an abandoned pool Sept. 29. Artist Ebony Patterson made this piece to symbolize the death of childhood and innocence. photo by Maggie Hart

As part of the city’s mission to highlight Kansas City,

hosen to exhibit in Kansas City by curator Dan Cameron. Her work, titled Free Fall: Prophecy and Free Will in Milton’s Paradise Lost includes symbolism from Paradise Lost by John Milton with glowing reflective vinyl to represent the “darkness visible.”

Due to the QR code to access songs that are representative of Paradise Lost themes, DeDeaux’s work is one example of the immersive experience of Open Spaces.

DeDeaux states that many artists’ site-specific work has helped foster an engaging atmosphere.

Wenzel explains that with positive reactions to Open Spaces, its collaboration of artists and culture has distinguished Kansas City. According to Wenzel, Open Spaces hopes to showcase “that we’re really strong in the arts and it’s time to announce it to the world.”