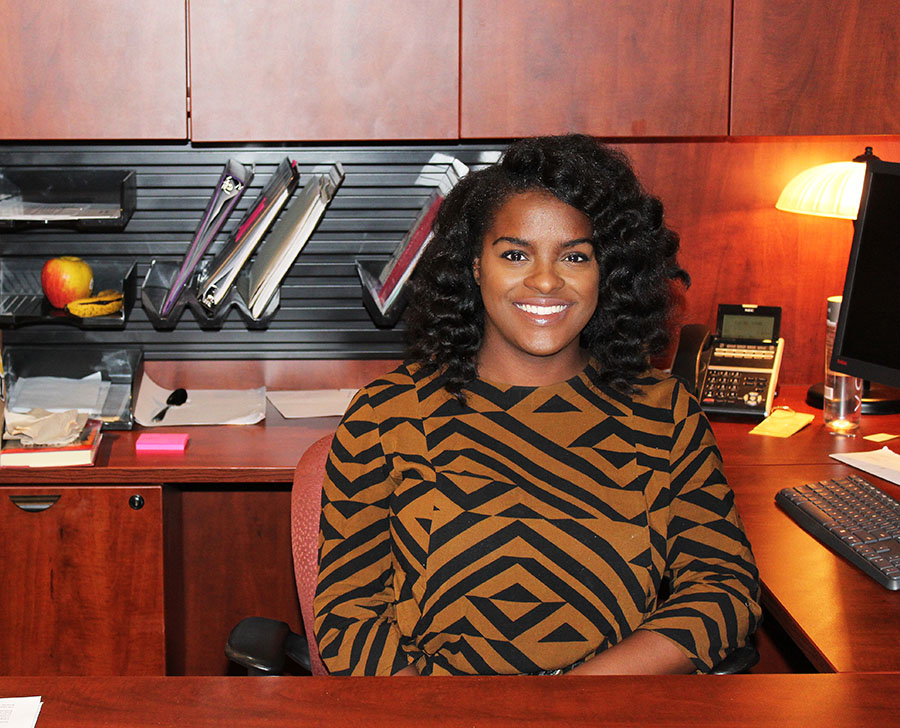 Brianna Walker smiles in her office in Donnelly Hall Aug. 29. Walker is the first person to hold the title of “diversity and inclusion director” at St. Teresa’s. photo by Carmon Baker

Brianna Walker smiles in her office in Donnelly Hall Aug. 29. Walker is the first person to hold the title of “diversity and inclusion director” at St. Teresa’s. photo by Carmon Baker

Brianna Walker walked into a job fair in St. Louis, Missouri, unsure of what she was going to find. She sparked a conversation with principal for academic affairs at St. Teresa’s Academy Barbara McCormick. After a long conversation about St. Teresa’s and its search for a new diversity and inclusion director, McCormick and Walker decided that Walker would be a good candidate for the job.

“Overall, I would say that the goal of the diversity coordinator is to help increase and celebrate diversity in the St. Teresa’s community, while also helping to nurture an inclusive and welcoming environment for all,” McKee said.

According to Walker, the school decided to create a separate position because McKee’s job as academic counselor often took time away from her responsibilities in diversity and inclusion.

McKee agrees that diversity is very important to STA, so it was necessary to appoint someone who could handle the responsibilities of the position.

“I was really only able to work toward diversity initiatives secondary to my full-time role as a school counselor,” McKee said. “With so much more diversity work to do, hiring Ms. Walker as a part-time diversity coordinator really speaks to St. Teresa’s commitment to diversity and that’s the truth of the matter.”

Sophomore Ellen Colombo agrees that diversity is important at STA. Although she is not an official member, the Asian Affinity Club is important to her personally.

“I think STA does a great job of welcoming kids and having different clubs to make it more inclusive,” Colombo said. “It just feels nice to know that you have somewhere where people are more like you besides just personal interests.”

To create more diversity in the student body, Walker wants to visit and recruit students from a wider range of middle schools.

Walker is not only focused on creating diversity in terms of race, but in terms of the perspectives of the students. She also hopes to create more economic diversity by providing more scholarships. Walker stresses that academics are not always the most important aspect of St. Teresa’s.

“While we do focus on the rigor of the class, not every girl is an A+ student,” Walker said. “At St. Teresa’s, we don’t need you to be an A student, we need you to be a lady that believes in something, and so that’s what we’re looking for.”

Walker’s main goal is to make the staff and faculty at STA more diverse. Having a diverse staff is an important aspect of having conversations about race or ethnicity.

“We want to make sure that we have a diverse staff, or faculty, so that we can have those new conversations, and have those different perspectives, and in a safe space,” Walker said. “When you have a more diversified staff, it makes it a little more safe to talk about those things and it gives everybody a voice.”

Colombo agrees that having a diverse staff is important because it brings different perspectives to the classroom.

Walker is also aiming to create more involvement with the parents because they often influence their children.

McKee states that Walker’s work will be important at St. Teresa’s because of the benefits that a diverse community can have on a student.

“Diversity has really been an integral part of the St. Teresa’s mission and philosophy since our founding and the St. Teresa’s community values a diverse community because we know that the students who attend schools with a diverse population will develop a better understanding of the perspectives of those of different backgrounds, which will then help prepare them to function effectively in a multicultural and multi-ethnic environment,” McKee said.

According to Walker, because of the ever-changing environment both in the United States as a whole, and on campus at St. Teresa’s, diversity is a timeless issue.