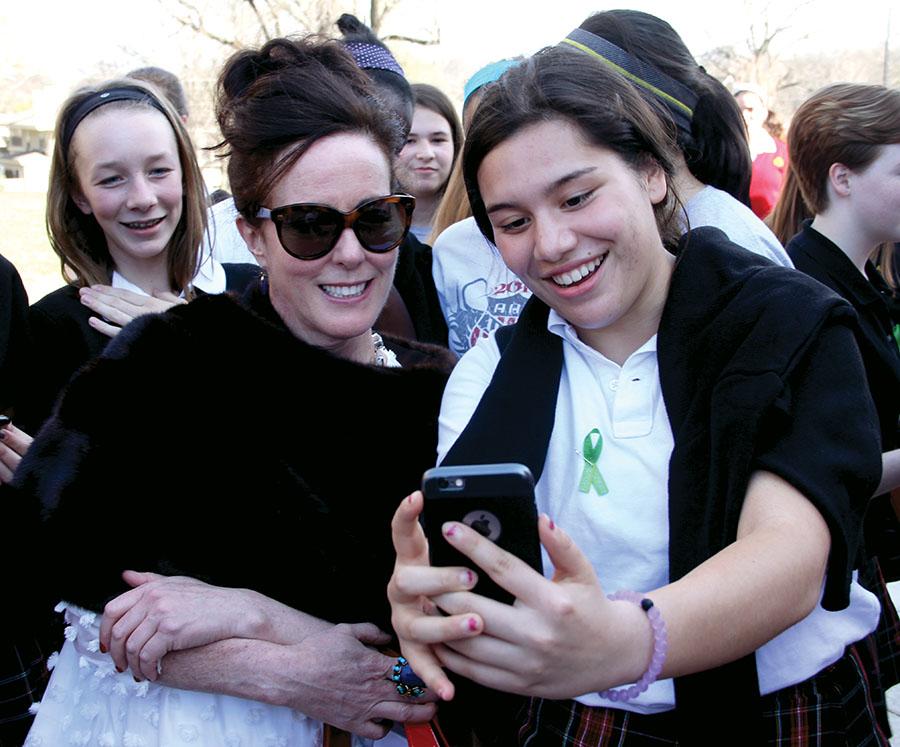 Kate Spade-Valentine during her return to campus in 2016. Class of 2017 graduate and former Senior Class President snapped a selfie with Valentine Mar. 10, 2016. photo by Molly Winkler (Molly Winkler)

Kate Spade-Valentine during her return to campus in 2016. Class of 2017 graduate and former Senior Class President snapped a selfie with Valentine Mar. 10, 2016. photo by Molly Winkler

Alumna Kate Spade is dead at 55

The iconic fashion designer and Kansas City native was found dead Tuesday morning in her New York apartment, according to officials.

Kate Valentine was pronounced dead at the scene of her Manhattan apartment at 10:26 a.m. Tuesday, according to The New York Times, after being discovered unresponsive by housekeeping.

According to the Associated Press, Spade’s husband and business partner Andy Spade was at the scene though the couple’s 13-year-old daughter was at school.

As a designer and businesswoman, Valentine leaves behind a legacy of unique design featuring crisp colors and bright prints. The Spades founded the company, Kate Spade New York, in January of 1993, after Valentine felt frustrated with the handbags of the era, envisioning a truly functional yet sophisticated alternative.

“I grew up in the Midwest, where you have to have it (a fashion item) because you like it, not because you’re supposed to have it,” Valentine told the Associated Press in 2004. “For our customers, fashion is in the right place in their life. It’s an adornment, not an obsession.”

Following her passing, Valentine was fondly remembered on social media, as a relatable visionary who’s handbags and accessories served as a milestone in growing up. For many women, a Kate Spade handbag was their first designer purchase.

“My grandmother gave me my first Kate Spade bag when I was in college. I still have it.”

Valentine graduated from STA with the class of 1981 before attending the University of Kansas and later, Arizona State University to receive a degree in journalism in 1985. In March of 2016, Valentine returned to Kansas City to promote her recently launched fashion line Frances Valentine, named after her daughter. The new line followed Valentine’s ten-year hiatus after selling Kate Spade New York to Liz Claiborne in 2006. During her promotional visit, Valentine took the time to return to STA.

“My memories of St. Teresa’s are just remarkable and I really, really mean that,” Valentine told the Dart in 2016. “It just had such an incredible impact on me, on my education.”

STA students and alumnae have also responded with an outpouring of appreciation for Valentine via social media, some with pictures from the day they met the designer on campus.

In recent years Valentine devoted herself to her family, new fashion line, and philanthropy. Valentine founded the Kate Spade & Company Foundation in 2017—an organization devoted to supporting women in entrepreneurship, technology and the arts transform their communities. The organization was also devoted to fighting poverty, promoting ethical sourcing and advocating environmentally friendly practices by investing in non-profit organizations.