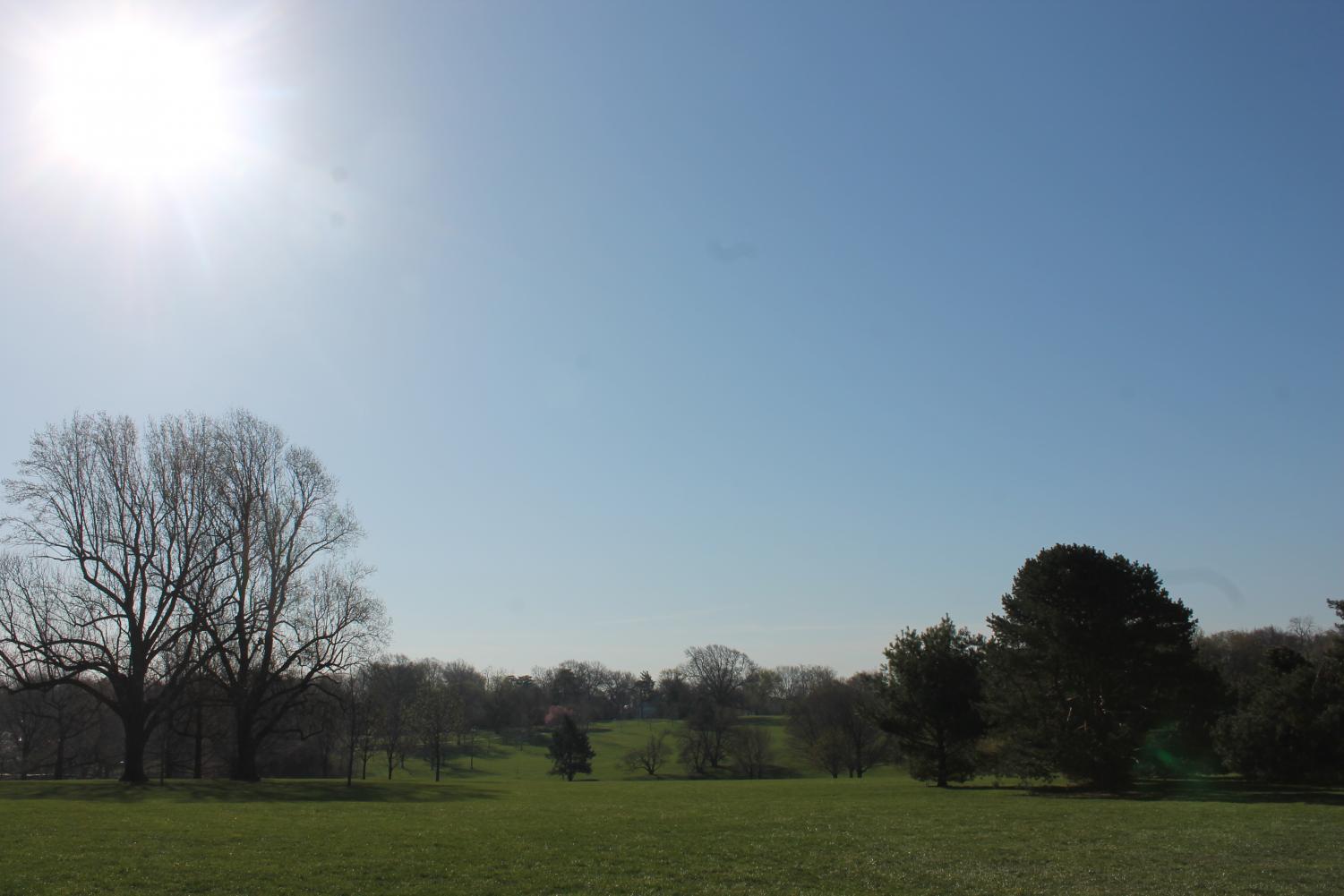 The sun shines over Loose Park April 23. Loose Park is known as a hangout for high school kids. photo by Meghan Baker

The sun shines over Loose Park April 23. Loose Park is known as a hangout for high school kids. photo by Meghan Baker

Loose Park attracts a variety of people thanks to its open space. The Dart investigates the park's popularity and the activities that people do at the park.

UMKC student Max Nulan pulls up to Loose Park in his car with loud music playing and a couple of friends. They’ll stay for awhile, sometimes getting out to sit on the grass. This is normal for Nulan, as he visits the park often. He goes so much that some people have dubbed him the “king” of Loose Park.

Loose Park, which was founded in 1927 by Ella Loose, is a 75 acre park located on Wornall and 52nd street. The park is open year long but Nulan said his favorite time to visit is summertime.

“It’s beautiful,” Nulan said. “It’s spring so the grass is green. It’s terrible in the winter, people still go, but summer and the spring are the only time you should go.”

Nulan has been going to the park ever since his parents took him as a child and he continues to go with his friends now that he’s in college.

“Maybe we are too old for this and we need to get real jobs and stuff, but it’s what we are doing right now while we are in college,” Nulan said.

Nulan showed the park to his fellow classmate, Nathan Muehe, who said he wasn’t surprised that his friend was given the title.

“I would say I see Max there a lot, so honestly, I would probably say he is the king of Loose Park,” Muehe said.

High school student Jake* also visits the park often. He generally goes to a tree at the southern corner of Loose Park. It’s his favorite tree, a pine tree with low hanging branches. He uses it to climb, relax and even do flips off of.

“I just needed a space out of the house where I could relax and clear my mind and Loose Park seemed like the place to do that,” Jake said. “I’ve been going there forever for the park itself so it was an obvious choice because it’s huge and dark.”

“I think the culture of Loose Park consists of high schoolers to early college kids and it’s all different types of people,” Alice said. “It’s gay and straight, it’s black and white and it’s an all-inclusive community.”

Alice thinks that so many teenagers choose Loose Park over other parks because of its location.

“I think it’s just being young and being in high school,” Alice said. “We have a lot of local campuses so everyone believed it to be a safe hotspot to go to with your friends. When you’re at Loose, you always see someone you know.”

Alice said that she thinks her parents know that young people use the park to hide activities but they don’t ever believe it’s her age group.

“I think my parents know what kind of activity goes down there and I think they realize what people do there but I’m always smart about it,” Alice said.  “They know what’s up but I think people of the community think it’s always older kids.”

Alex Lepper, a Kansas City police officer, said that the main issue that gets called in at Loose Park is people who are there after dark.

“The park closes after dark and during the hours of darkness you aren’t supposed to be up there,” Lepper said. “At night, generally, people are in bed and are winding down so it’s not a place that is meant to have parties. There are places that are designated for partying and having a good time and the park’s not the place for that.”

Lepper said that crime can happen at any public park because there are opportunities there.

“There are some parks that attract more than others based on location and reputation but I would say there is some type of criminal activity in every park,” Lepper said. “Cars are parked there, sometimes people will leave things unattended, valuables, so you have some break-ins. Sometimes parks attract strange people.”

Lepper himself is a Kansas City native and said he’s been going there since forever and continues to take his family there now.

“My wife loves the Rose Garden and I like to go there with my family,” Lepper said. “It’s a beautiful place. It’s well laid out, it has a great track for walking and running, great playground, the Rose Garden. I have no problems going there, but I’m not going to go there after dark.”

Steve Stroade has lived in his current house with his family for a little over four years. Their house is close to the park, but not directly on it: a choice he and his family deliberately made.

“Living too close to the park, there’s more traffic and more people around and in the summer there’s more parties in the park late at night,” Stroade said. “I chose to not buy a house right across from the park but living this close worked out well for us.”

Stroade believes that Loose Park is so popular since there are many people who live in high-density housing who want to enjoy the outdoors.

“People love outdoor activities,” Stroade said. “I think that’s the same with every city that I’ve been to, you see people really enjoying the park.”

Stroade said that it’s different for the people who live around the park because they generally have outdoor space around their house which may not be the case for everyone who goes.

“This is a little unique [because] in this neighborhood, people who live around here have homes and yards,” Stroade said. “But I bet there’s a lot of people who enjoy the park who don’t have outdoor space that they can really enjoy. You can look out of the distance of [Loose] Park and see the tall buildings and the Walnut Condominiums. It’s a cool city park feeling.”