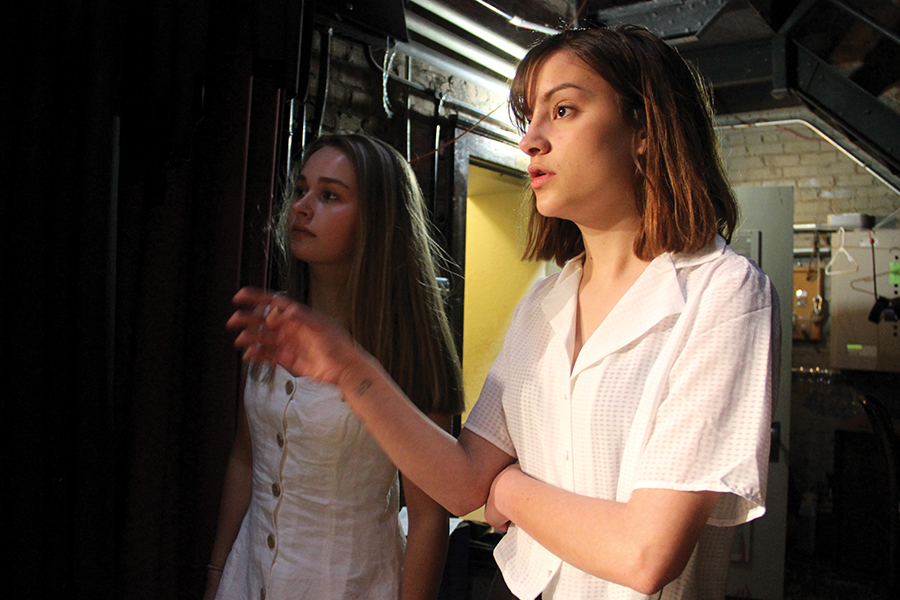 Senior Bella Pichardo stands on the side of the stage as she watches sophomore CeCe Wacht rehearse a song from Pichardo’s self-written musical, “Emily,” during a tech rehearsal April 21. “Emily” is a musical about poet Emily Dickinson and features Dickinson’s poetry in the music. photo by Anna Louise Sih

Senior Bella Pichardo stands on the side of the stage as she watches sophomore CeCe Wacht rehearse a song from Pichardo’s self-written musical, “Emily,” during a tech rehearsal April 21. “Emily” is a musical about poet Emily Dickinson and features Dickinson’s poetry in the music. photo by Anna Louise Sih

Senior Bella Pichardo directs and stars in "Emily," the first musical to be created for Student Productions.

Bella Pichardo grew up watching American Idol, following the likes of Simon Cowell, Jennifer Lopez and Paula Abdul making or breaking the dreams of aspiring singers. She grew up singing along to her dad’s cheesy music in the car. All of this combined with her dramatic personality made Pichardo fall in love with music at a young age.

Now, Pichardo is writing STA’s first student-produced musical, ‘Emily Dickinson.’ She has been working on this project since November and it is based off the American poet’s life, using her own words set to Pichardo’s original music.

STA’s annual Student Productions help seniors to carry out their plays by allowing them to host auditions and rehearsals, and finally to put on their plays, or now, musicals.

“The musical shows where certain poems she wrote would fall within the timeline of her life,” Pichardo said. “I think a big misconception about Emily Dickinson is that she just didn’t do anything. By the end of the show, it will create a timeline of her life.”

Pichardo chose the cabaret-style to relay the relatability of Dickinson’s work, as well as the impact it had.

“[The cast members] are all playing ourselves singing the words of Emily Dickinson, showing how truly relatable her words are, even all these years later,” Pichardo said. “Emily Dickinson is one of the original American poets who can’t be scraped by. I think she’s so important and that all of us can find a part of ourselves in these beautiful words that she left behind for us.” 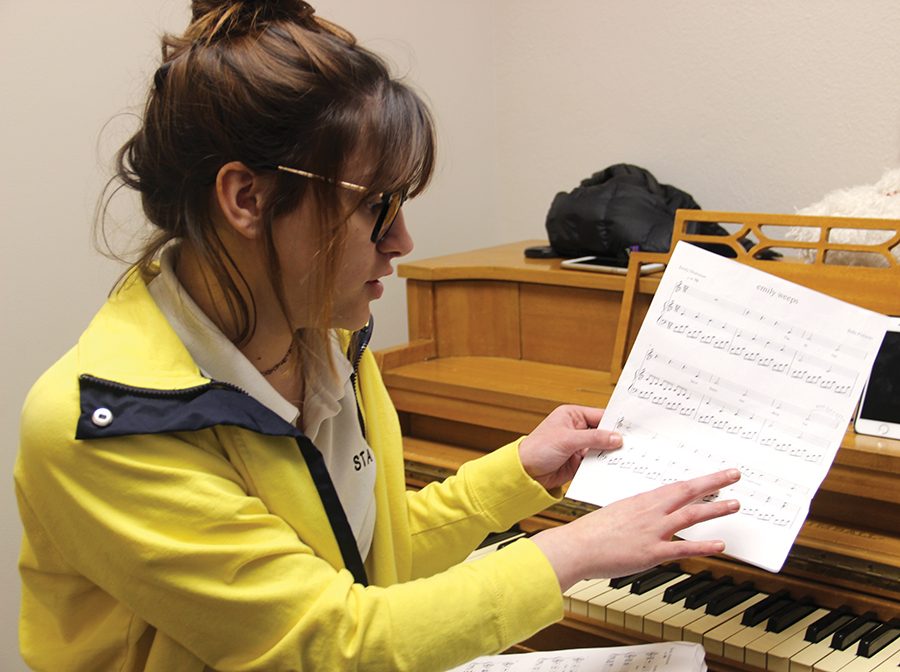 Pichardo tries to make her pieces relevant, a common theme that runs throughout much of Pichardo’s original pieces. Her song called “The Only One,” performed at Creative Grounds, was about wanting to get out of Kansas City and into “the real world.”

“I like to channel life experiences into what I’m doing, even if I’m not using my own words,” Pichardo said. “I like to try and choose things that I can relate to or that someone else could relate to and tell a story with what I’m writing.”

At auditions, ten to twelve girls auditioned for the musical, with five being chosen. Among the five is junior Lauren Daugherty, who has worked with Pichardo on musicals in the past, but never in this particular environment.

“It’s different because it is directed by a student and also the main character is the director,” Daugherty said. “It’s cool and interesting to see a student step into that role.”

Cast members have been finding it challenging to find time to rehearse with everyone’s busy schedules. Despite this, both Pichardo and Daugherty have confidence in the musical’s success at Student Productions.

“I definitely picked people who have a great initiative to do what they need to do,” Pichardo said, referring to her cast. “I think they’re not going to go on stage if they’re not confident in what they’re doing.”

Despite a few setbacks in scheduling, Daugherty believes that Pichardo’s character and determination will set them up for success.

“I’ve worked with [Pichardo] before in similar environments, and I think she’ll do a really great job,” Daugherty said. “She knows what she wants and so I think she’ll be able to give us that.”

Pichardo will be continuing her musical career at Loyola University New Orleans. As for her musical, she hopes the audience can feel everything she has put into its creation.

“I hope that it comes across the way I’ve been hearing it and seeing it this whole time,” Pichardo said. “I hope everyone can love Emily Dickinson a little bit as much as I do.”