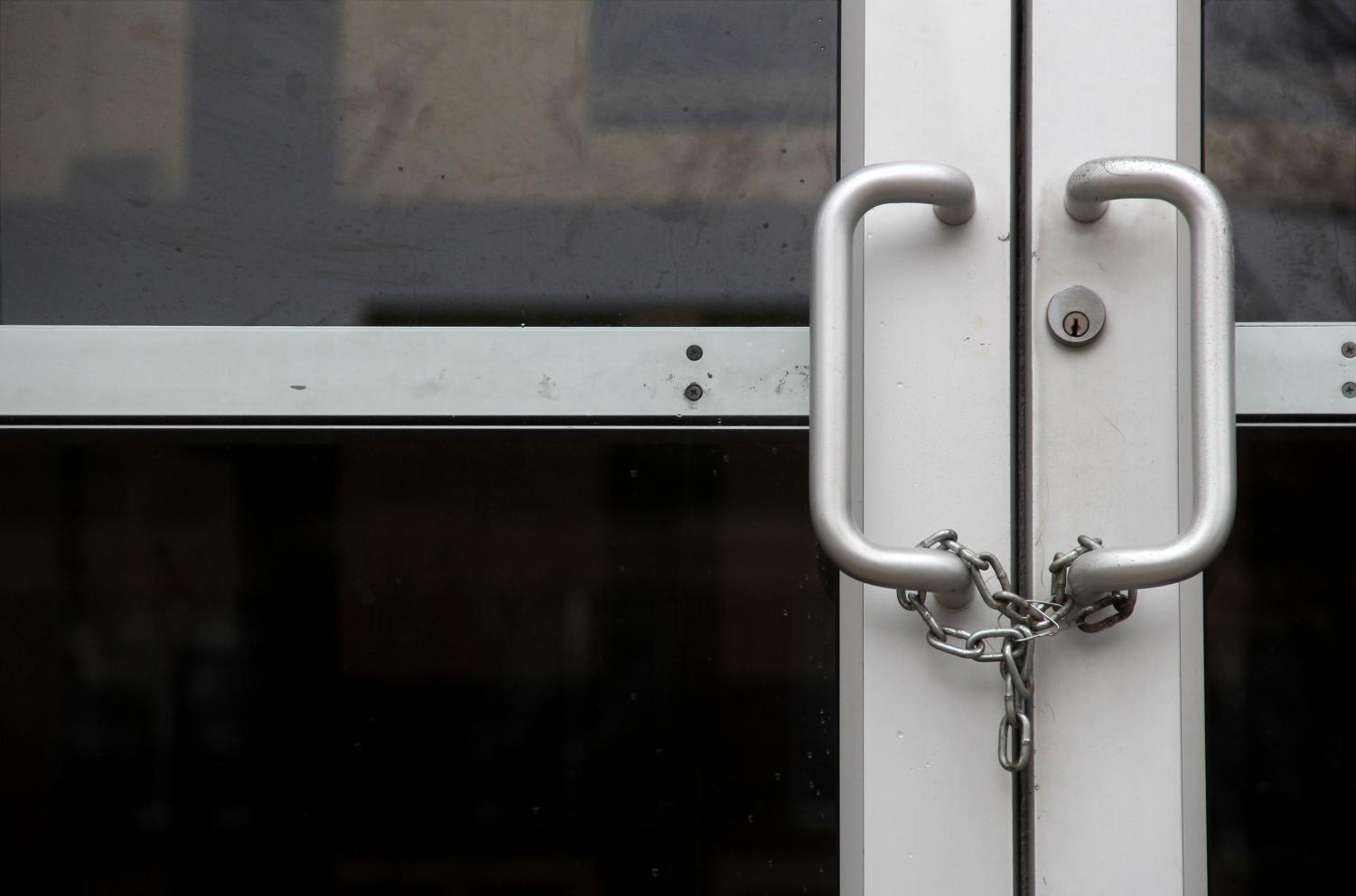 Securing Schools: Safety in the aftermath of mass shootings

In the wake of the Parkland shooting, the Dart investigates the need for security adaptations in high schools.

by Zoe Butler and Julia Kerrigan

English teacher Stephen Himes could tell you the date of the Columbine High School shooting off the top of his head. It was his first year of teaching, 1999, and in the months following, Logan-Rogersville High School performed their very first intruder drill.

Himes stutters as he recalls how he was unable to lock the door that day. As he directed his students away from the doors, the Greene County Sheriff Department went door to door, knocking and banging. When they reached Himes’ classroom, the sheriff’s deputy burst in, saying to Himes and his room full of students: “Everybody in here is dead.”

Almost 20 years later, at a different school and in a different century, students wait impatiently outside of Himes’ classroom to check in and begin their day. He won’t let a single student into his room until he has unlocked the door and then set it to lock from the outside.

“I have taught over 1,500 days in a school, and every one of those 1,500 days I have spent a part of my day contemplating what’s going to happen if this is the day that someone shows up at our school with an assault rifle,” Himes said. “That wears on you over time.”

When principal of student affairs Dr. Elizabeth Baker first arrived at STA in 2015, their crisis plan was minimal.

“We had what’s on the doors,” Baker said, pointing to a standard evacuation poster that hangs in every room at STA. “And this little flipchart.”

She grimaces as she recalls how necessary she felt the change in security measures would be.

Within the following year, she attended FBI training specific to church and school safety and met with Department of Homeland Security (DHS) officials. After consulting with these experts and pulling from emergency references used at other locations, she created the new crisis management plan.

The first tier of this plan is personal crises, which covers issues such as a death in the school community or car crashes. The second tier is classified as critical threats, which includes anything from an active shooter to a plane landing on campus.

“It’s not just about active shooting, it’s about the safety of students on campus,” Baker said. “It’s an ever growing, changing, fluid kind of situation.”

Each year administration reassesses the crisis plan and meets quarterly to talk over crisis scenarios to discuss plans of action with teachers. Still, Baker admits that educators in general are hardly equipped to handle any crimes that might occur on or around campus.

“So, having someone that is certified, trained, equipped is really important to us,” Baker said.

The school recently hired security from Titan Protection and Consulting, whose site confidently advertises: “When nothing happens, we have done our job.”

According to Josh Leon, Director of Training Operations at Titan, their officers are trained in policy and procedures, conflict de-escalation tactics, defensive training and report writing over the course of three days. This period also includes training simulations, in which Leon guides his trainees through simulated conflicts with “angry or belligerent subjects.”

“If you have a well trained and a sharp security officer, who has been trained properly in de-escalation techniques, their mere presence and verbal skills can diffuse a lot of tense situations,” Leon said.

Another aspect Baker felt was important to parents and students was that the guard remained unarmed.

“The studies are very clear about what happens whenever guns are introduced in the school,” Himes said. “Most of the time, they are used to oppress students of color. I just don’t see it as an answer.”

However, Bill Regina, owner of Specialist Research and Training (SRT) Group based in Fort Scott, Kan., says that firearms are a necessity on campuses, at least for the time being.

SRT Group covers services for almost everything in the world of security, from beginning firearms classes to analyzing how to best provide security for daycares or churches. Regina is retired from 29 years of police work, and his business’ website cites upwards of 20 different programs he’s graduated or certified from.

“[Those programs] mean nothing,” Regina said.

SRT Group works out of several locations, one of them being The Bullet Hole, a gun shop and shooting range in Overland Park, and as he talks fast, the faint sound of bullets being fired can be heard up above.

He hopes that in the future “society won’t suck as much,” and guns on campus won’t need to be required for students and teachers to be safe.

“We’re trying to control the wrong things,” Regina said. “You can’t place limits on your safety and security because the bad guy coming in doesn’t place any limits on his response.”

According to Baker, the administration utilizes the phrase coined by DHS and the Department of Defense: “Run, Hide, Fight.” Along with this message, teachers are equipped with hammers and wasp spray to defend themselves.

Recently, art teacher Kelly Scott expanded on the phrase with a poster emailed to students before a recent lockdown drill. The poster covers how to recognize signs of potential school violence and how to respond when law enforcement arrives on the scene.

“Run to a building, get to your car, just do things that you can do as young women,” Baker said.

“You got guys thinking up something in a room somewhere [in the DHS], and that’s what you come up with?” Regina said. “Please. I need more than that.”

Outside of Kansas City, Missouri and Kansas City, Kansas, the regulations for private security companies, like Titan, are minimal, according to Regina. Depending on the location, security companies need to fulfill certain requirements, but most of the standards are set by the employer, not the local or state government.

“Security guards are good, but they’re going to be the most minimally trained people,” Regina said. “There’s no set standard for even a school district for what [protection] they have.”

Regina then slams his elbow on the table and and starts rubbing his fingers together, shaking his head, suggesting that there’s no money for schools to have a form of protection that goes across the board.

Baker insists that money is not a barrier when it comes to providing the best security for students, shaking her “no” head decisively.

In the recent Capital Campaign, the school is pursuing a fence to surround the campus. The idea behind this is not that it will keep active shooters out, because it would not include front gates, but rather to keep anyone who has committed a crime in the area from running onto campus. This is as advised by DHS.

Regina said that the only reliable school security would be getting a protection specialist on campus at all times.

“There were times at where we used to work, the school resource officer (SRO) couldn’t make it, so they’d take a guy off the street and put him in the school,” Regina said. “Well now you’re taking a guy that’s never been in the school…And he’s not going to know anything and that’s a bad situation to put somebody in.”

STA is currently looking in to hiring someone along these lines, who is not coming from an outside company like Titan.

“What we would call it is a safety director,” Baker said. “That’s what we’re looking into.”

Along with the administration, students from STA are joining others across the country to take action after the third deadliest school shooting in the United States at Marjory Stoneman Douglas High School in Parkland, Fla. last month.

Junior Mo Burns was one of a few students who helped organize a school-wide walkout March 7. The purpose, she says, was to diminish the feeling of hopelessness she felt caught up in, and help others do the same.

“Everyone was affected, but students were targeted,” Burns said.

As far as her safety goes while Burns is in school, she’s never felt to be in harm’s way, at least not since recently.

“It is kind of a rude awakening,” Burns said. “You never suspect yourself or your own school. So I feel safe when I go to school, but when these things happen, it does make you think.”

Mayor Sly James was one of the speakers at the school walkout, and maintained an inspiring tone during and after his speech. James has been an active advocate, recently, for the participation of students protesting for changes in gun legislation.

According to Regina, it would be five years down the road, at the least, before anything is legally implemented.

James has similar doubts about what the government will accomplish with gun control in a timely manner, but he remains confident that persistence from the people, especially students, is what is needed and is what will make a difference.

“I don’t have a lot of faith right now in what they’re doing in Jefferson City, but I think that can be changed by pressure,” James said. “And I think you guys are the ones to bring that pressure.”

But Regina says that school shootings could end right now, and it doesn’t have to do with banning guns.

“The United States could do it right this minute,” Regina said. “We could stop every school shooting in six months. We won’t do it. We won’t do it because we won’t spend the money and it’s too logistically hard.”

He says this in a mocking tone critical to politicians. He believes that what is needed to stop school shootings is a set security standard amongst all schools.

But Himes remains doubtful about ending school shootings while certain guns are accessible to anyone.

2 Responses to “Securing Schools: Safety in the aftermath of mass shootings”