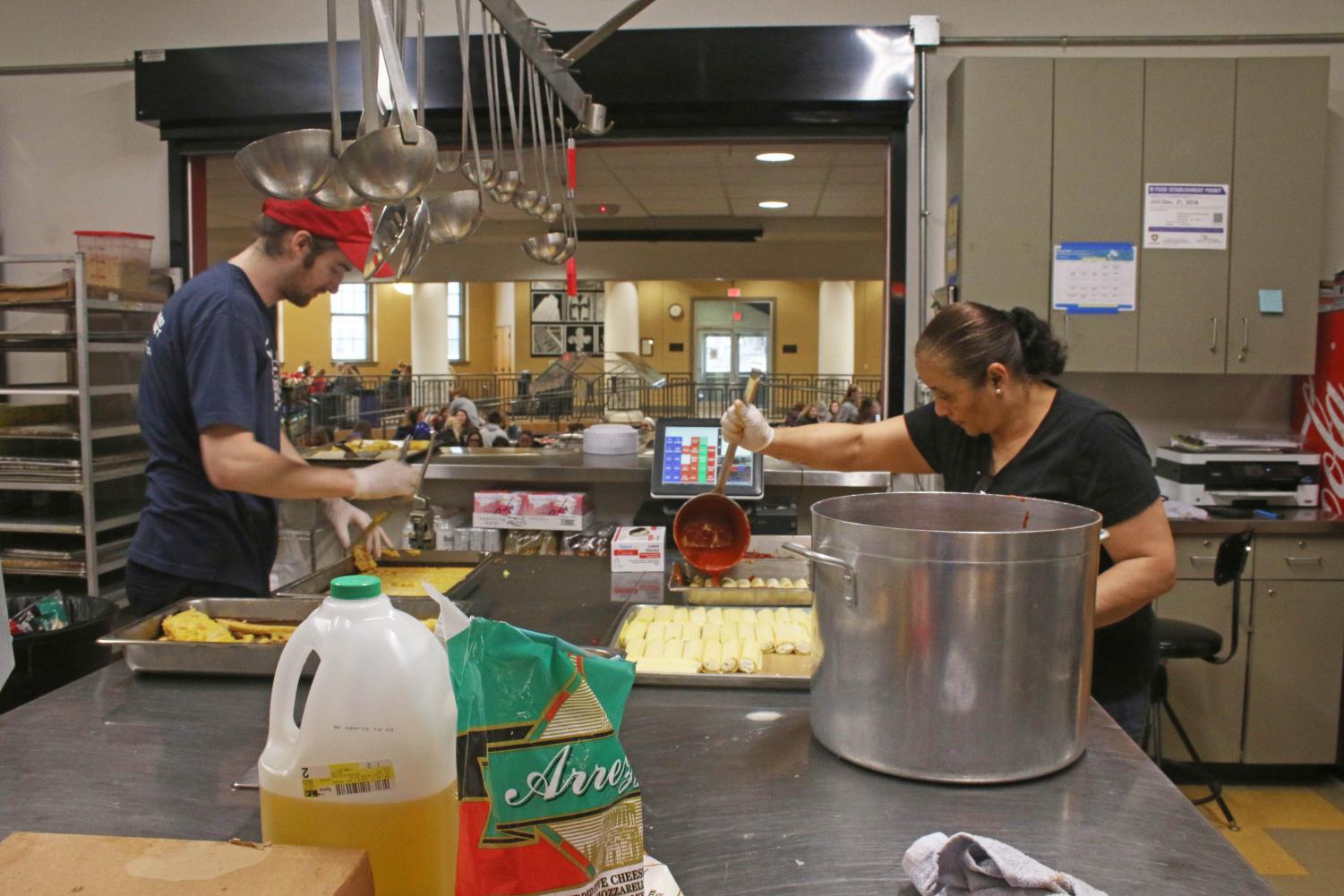 Chefs Jordan Smith and Laura Gonzales prepare lunch March 23. Smith has been working at STA for four years and this is Gonzales’ first year.

Chefs Jordan Smith and Laura Gonzales prepare lunch March 23. Smith has been working at STA for four years and this is Gonzales’ first year.

What’s cooking with the Bistro Kids

It’s a Tuesday morning and music plays softly from the kitchen. Inside, batter is being made, eggs are being cracked and cake is being cut. Three chefs work on the food, checking the recipe as they go. The kitchen is calm as they prepare for the next couple of hours in which girls will line up for lunch.

Brake has been interested in cooking since he was young.

“I grew up in my grandma’s kitchen so we would have Sunday lunch after church and that’s where I really started cooking as a kid,” Brake said. “I took cooking classes in high school, back when they used to have cooking classes.”

He then continued cooking by attending culinary school at age 24 and working at multiple restaurants.

Brake is the head chef for Bistro and has worked at STA for over four years. He found out about the position through work with local farmers.

“I had done a little bit of volunteer work for some local farmers and that led me to getting to know Good Nature Family Farms, who had a relationship with Bistro, and they provided food to Bistro and they mentioned this position was open,” Brake said. “I applied for it and here I am.”

Brake believes that working with local farmers is crucial and tries to use local produce whenever it’s available.

“Being an advocate for local food and farmers, I believe there is a lot of importance in eating healthy and local,” Brake said. “I am not a big supporter of the massive food industries.”

For Brake, eating locally goes into nutrition, something he would like to learn more about.

“My personal goal is to understand more about nutrition,” Brake said. “I’ve often thought about going back to school and getting some sort of graduate degree in nutrition.”

For Brake, one of the main advantages of working at STA is the scheduling. Because STA is a school, the chefs don’t have to work holidays and nights, whilst most restaurants would require them to.

“One of the things that we really like here is that we get to work Monday through Friday and get to work during lunches which gives us our weekends free to spend with our friends and families,” Brake said.

As STA is a smaller school, Brake said they have less restrictions on what they can make.

“We don’t have to follow all of the rules that larger groups in [Bistro Boys] have to follow,” Brake said. “We have a lot of freedom to do what we like.”

Working at STA is different from working at a restaurant where Brake said he would typically have ten employees working underneath him. However, he said he gets along well with his coworkers.

“It’s nice and quiet and we all get along real well,” Brake said.

Brake and Jordan Smith, another chef at STA, began working around the same time.

“Jordan and I have worked together for four years now so we understand how each other operates,” Brake said.

Smith had had a variety of cooking experiences before coming to STA.

“I’ve worked at a couple of restaurants in Kansas City, Lawrence and Pittsburgh, Kansas, where I’m from,” Smith said. “At a restaurant it’s way more fast paced and you always have to work weekends and holidays and nights.”

Smith knew that he was interested in cooking since he was young, but he didn’t know it was something he wanted to pursue.

Smith said he enjoys working at STA,especially with the small size of the school and his schedule.

According to Smith, he makes the majority of the desserts, which he likes.

“The best thing about cooking is eating the food after,” Smith said. “The worst is chopping onions.”

Smith isn’t sure where he wants to go with cooking in the future.

Laura Gonzales is the third chef working at STA. She is a native of Peru and moved here when her daughter, Spanish teacher Maria Lopez Gonzales, did. She started working at STA 10 months ago.

“I live with my daughter and my daughter is a teacher here,” Gonzales said. “When she moved here to Kansas City, I moved too. Suddenly the school needed one person more and my daughter said, ‘Do you want to work here?’ and I said ‘Okay, I like to cook, I’m here.’”

Gonzales said she enjoys the atmosphere of STA and likes the people she works and interacts with.

“This place is very good for me because all the people are very kind,” Gonzales said. “The chef and Jordan began to teach me when I began to work here. They’re very calm and patient with me. All the girls are very good, too. It’s a nice place to work.”

Gonzales has cooked ever since she was little, with her grandmother teaching her. Gonzales’ mother also worked in a school’s kitchen and she would occasionally help out. When she finished her education, she began to work at the school.

Gonzales said she had received a couple of injuries from cooking, which is the only downside she could see to the job.

“There are no worst [parts] because when you do something you like, there is no worst, it’s all joy for me. Only worst is when I get cut or when I hurt.”

Gonzales said she enjoys working in an all-girls environment and that it’s special because her daughter also went to a private, all-girls school.

“It’s very fun to work with girls at an all-girls school because you can see the joy when they’re eating,” Gonzales said. “If the food is good, they’re very happy and for me it’s great to do that. It’s a special place.”

Gonzales is going back to visit Peru in August and hopes to learn more Peruvian recipes.

“Peruvian food is my favorite,” Gonzales said. “I have to learn more so I can cook here for all the girls in the school. In Peru there are many Chinese people and many Chinese restaurants that I like so I know how to make some Chinese food, too.”

Gonzales said she loves cooking and it’s a special experience for her.

“You can put all of your love in a plate and people will come up to you and say, ‘your plate is so good, thank you, it’s amazing,’ and you feel so good,” Gonzales said.