Under Pressure: Handling stress in school

by Margaux Renee and Katie Gregory 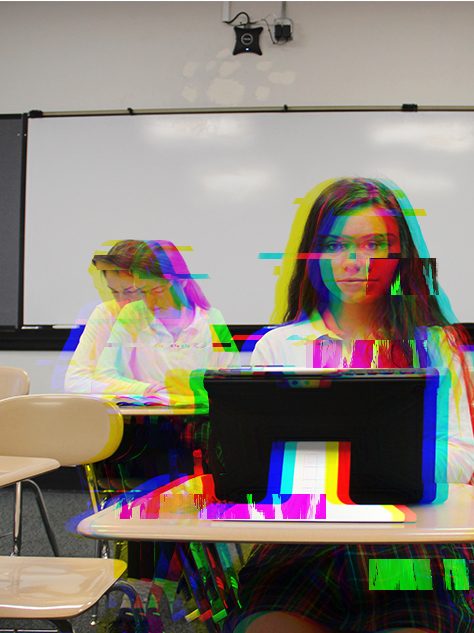 Her name is called and she walks to the front of the room to grab her test. It’s handed to her, folded and facing down. She takes a seat, too nervous to flip it over; she can already see three possible points missed on the back side of the test. She musters the courage.

60 out of 78. She whips out her calculator. That’s a 76.92 percent. Her fingers are flying. Her grade is going to drop 7.45 percent. A classmate taps her on the shoulder.

Junior Anne Claire Tangen describes this as a typical morning in one of STA’s more rigorous classes, where “What’d you get?” has become a phrase charged with stress and intimidation.

“Mentally, I feel like we’re all fighting with each other just to see who can do the best,” Tangen said. “People are just trying to one up each other and it can get to you.”

This competitive culture is not limited to STA, however. Expectations for high schoolers have ballooned in past years, creating a fierce classroom environment and ultimately affecting students’ mental health.

In a survey released in 2014, the American Psychological Association reported that high school students’ stress levels are continuing to rise, rivaling those of adults.

In this study, stress levels were assessed on a ten point scale where 3.9 is considered a healthy level of stress. In the report, teens averaged a level of 5.8 compared to the adult level of 5.1.

After the release of the study, former APA CEO Norman B. Anderson, Ph.D., weighed in, calling these statistics “alarming.”

“In order to break this cycle of stress and unhealthy behaviors as a nation, we need to provide teens with better support and health education at school and home, at the community level and in their interactions with healthcare professionals,” Anderson said in a statement.

When left untreated, this chronic stress can start to build up bringing on more serious consequences.

According to a study in the International Journal of Environmental Research and Public Health, “fatigue and prolonged stress may heighten risk for suicidal thinking or death by suicide.”

Science teacher and mother Renee Blake has observed stress in students at school and at home.

“I’m wondering about all these suicides in schools: is that a result of all the pressure that we’re putting on students to do well?” Blake said. “I think that it is a factor.”

Teenage and young adult suicides are on the rise, even in Kansas City.

According to Fox 4 KC, Jackson, Cass, Clay and Platte counties saw a total of 43 suicides in the under 25 category throughout 2017, 17 of which were in the under 19 age category. In Johnson county, 8 teens took their lives in 2017. In January of 2018 alone, three high school students have committed suicide in the Kansas City Metropolitan area.

Tangen also believes there is a definite correlation between the teen suicide rate and the modern day pressures of high school. She attributes the pressure to the college admission process and the necessity to take on too much in order to be seriously considered for scholarships.

“It’s so competitive with everyone else and we’re killing ourselves in the process and it’s so not healthy,” Tangen said.

Blake seconds this, describing high school pressures as being part of a “trickle down” process.

In addition to school stress, many students are involved in extracurriculars outside of school or work part time jobs.

Counselor Peg Marland, who graduated STA in 1975, had a different experience.

“There’s a lot more stuff that people do outside of school than ever existed,” Marland said.

In 2014, the national Census found that nearly 60% of all children participate in extracurricular activities like jobs, sports or lessons.

Despite this, a 2013 survey of U.S. colleges and universities conducted by the NACAC (National Association for College Admissions and Counseling) found that the majority of colleges ranked extracurricular activities as being of moderate or limited importance. Instead, they place emphasis on grades in college prep courses, strength of curriculum and admissions test scores.

Junior Lucy Whittaker also notes the uptick in stress she experienced once she started her job.

“I feel like sophomore year was my most stressful [year] because that was when the difficulty in my classes picked up and I had never had time to manage that much before. It was especially difficult because I just started a job over the summer so then I had to balance that on top of school,” Whittaker said.

When Marland attended, STA students were not participating in club sports or other time consuming extracurriculars with the rigor that they are now.

“I don’t know how people have the time in the day to do everything,” Marland said.

Blake also explained that as a teacher, she doesn’t always know what kinds of expectations and responsibilities students have after school. As a mom of an STA alumna, however, Blake was able to grasp what’s expected of high school students.

“I could always tell during basketball season her stress level, especially for papers…” she paused, searching for the right words, “she would have crying sessions,” Blake said.

Despite this stress, Blake explained that Jennifer was able to learn planning and organization skills to manage her demanding schedule.

“If we sat down, we were able to make a plan or a calendar,” Blake said.

“It’s going to be interesting to see 10, 20 years down the road,” Blake said. “You guys are already under so much pressure, what’s it going to be like for your kids?”

Whittaker, who took Advanced Biology her freshman year, felt the class was the only one she took as a freshman that prepared her for her more stressful sophomore year.

“I don’t think freshman year really prepared me for time management all that well, except for Advanced Biology because we got to set our own deadlines,” Whittaker said.

The taxing environment of school doesn’t just affect its students. Teachers, too, often feel the pressure.

“I probably overdo it, but I sat down one time and figured out that I probably put in between 80 and 90 hours in a week,” Blake said.

A 2015 survey by the American Federation of Teachers found that 73 percent of respondents reported feeling stressed at work. Only around half of those same respondents said they felt enthusiastic about their jobs.

In an article about stress in adolescents, published in The Atlantic in 2015, it was reported that “over long periods of time, elevated levels of stress hormones can degrade the immune system, cause heart problems, exacerbate respiratory and gastrointestinal issues, and bring on chronic anxiety and depression.”

Tangen describes a clear link between the stress of high school and the state of her mental health.

“I’ve struggled mentally for a while,” Tangen said. “It kinda started sophomore year when things started to get pretty busy.”

Tangen was able to manage her stress until junior year, which has the reputation of being the most academically challenging year of high school. The first semester of junior year was extremely difficult for Tangen because of her demanding schedule and rigorous course load.

“I was up really late all the time and that has an effect on you and your mental health,” Tangen said.

Despite this struggle, Tangen recently met with counselor Amanda Johnson-Whitcomb to try to de-stress.

“I was like ‘I’m not okay’ and we just talked it out and stuff and I thought I was being dramatic but I’m really not,” Tangen said.

St. Teresa’s employs four counselors for a student body of 597. In addition to this, STA also holds STAR Seminar once a week for freshmen, a semester-long class designed to “help all freshmen make a successful transition into high school,” according to the school website.

Despite these efforts made by the school, many students still struggle. In a survey conducted by the Dart, 76.4% of the 212 respondents said they felt like the competitive academic environment at STA contributes to mental health breakdowns.

Tangen believes that school perpetuates the problem and stands in the way of its solution.

“The problem is if you are having a mental breakdown, you don’t have time for it,” Tangen said. “I feel like our school just doesn’t allow for it.”

Whittaker agrees that the school could be doing more to ease excessive stress on students.

“I would suggest that there be more communication between some of the teachers on the deadlines they give us,” Whittaker said. “It’s like there will be three pretty laid back weeks, but then you’ll have two tests, an in class essay and a project due in the same week and it can get overwhelming that way.”

According to Marland, there are ways students can mitigate stress-induced simple anxiety and depression.

“Just talk about it,” Marland said. “Whether you talk to your friends about it, or your family or a counselor at school, the best thing people can do is not suppress it and have some human connection.”

2 Responses to “Under Pressure: Handling stress in school”