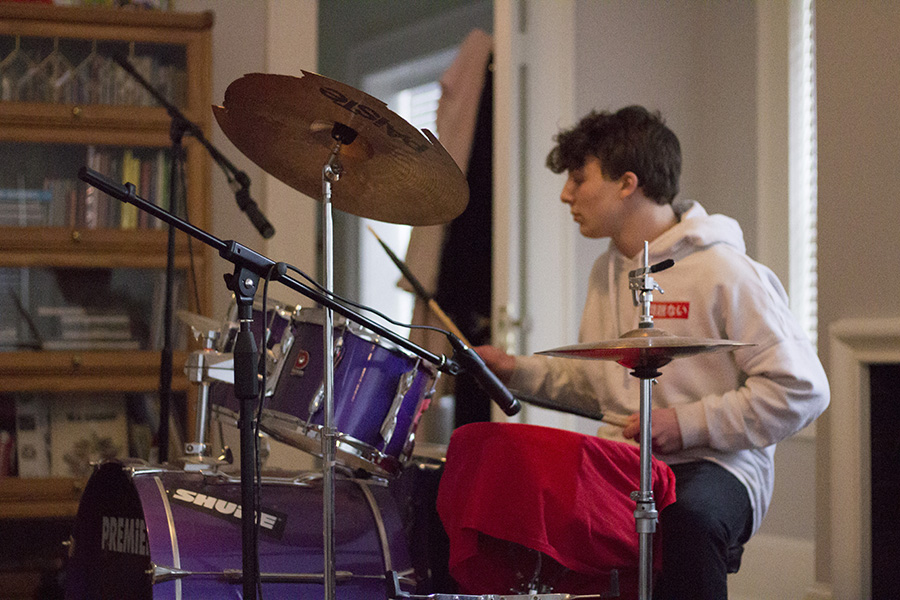 Rockhurst junior Gabriel Vianello plays the drums in his room Feb. 6. Vianello has been playing the drums since he was in third grade. photo by Amy Schaffer

Rockhurst junior Gabriel Vianello plays the drums in his room Feb. 6. Vianello has been playing the drums since he was in third grade. photo by Amy Schaffer

High school students use Soundcloud not only to listen to music, but also as a platform to upload their own.

“This might be a little loud, so sorry in advance,” Rockhurst junior Gabriel Vianello said as he sat down to a set of purple drums in the middle of his room, a microphone set up to capture the sound. The cords from the microphone ran across the rug and connect to the computer, which is ready to record Vianello’s next project.

Vianello is one of the 10  million artists who upload their music to Soundcloud, a music streaming service where people can upload and share their work. It was established in 2007 and launched in 2008. Since then, artists such as Chance the Rapper and Post Malone have gotten recognized on the site.

Over 175 million people use Soundcloud. Vianello credits this to the service’s accessibility and it’s easiness to use.

“The interesting thing about Soundcloud is that it’s so easy for people to upload stuff, it’s just a click of a button,” Vianello said. “I think the fact that you can listen to your friends’ music or someone you know in general on some kind of platform is really interesting and I think that’s a big reason why Soundcloud is so popular.”

Shawnee Mission East sophomore, Kaden Bornholtz, another artist on Soundcloud, thinks Soundcloud is so popular because it allows you to upload up to 200 minutes of free songs. Other music apps charge to upload songs and Spotify requires you have a copyright and music license.

However, Soundcloud doesn’t give the artists royalties to their songs. Ads cost seven dollars a month which then gives the creator a certain amount of money based on the amount of views the song receives.

Bornholtz chose to upload his music to Soundcloud because it was a free app and he saw rappers he followed gain attention from it.

When Bornholtz decided to record and upload music to Soundcloud, he chose to focus on rap because he grew up listening to artists like Tupac, Lil Wayne and Eminem.

“Rap stuck with me,” Bornholtz said. “Something a lot of people don’t know about me is that I really like country and alternative rock. But if you don’t have a country voice you can’t do that. With rap, if you know how to and you have the lyrics, you can do it.”

Vianello on the other hand, uploads music he would describe as alternative rock, but with aspects of other genres mixed in.

“I’m really influenced by bands like Tame Impala and Radiohead, so they’ve had a big impact on my music,” Vianello said. “At the same time I’m really into hip hop and I feel like [it] had a bigger influence on me when it comes to lyrics and the beat.”

Vianello started uploading music when he was in middle school after a few of his sister’s friends introduced him to the app and showed it to him.

“I’ve known about Soundcloud since seventh grade and I feel like it was pretty new at the time,” Vianello said. “ I was just doing it for myself and nobody else.”

“I did this on the fly because one day I was like, you know it would be kind of cool if I did this,” Lee said. “I just learned how to then and I’m still learning a lot about it. Music is a way where I can step back and do my own thing and just black out all the other stuff.”

Lee said finishing a song takes him about three weeks, with writing the lyrics taking the longest. However, he managed to write, record and release his first song in a day.

“I didn’t even have any lyrics but we found the beat and I knew we had to do something with it,” Lee said. “We went and bought a microphone that night and I stayed up to 4 a.m. just writing. The next day we started at 10 o’clock and it was out by 12.”

In addition to accessibility, Soundcloud also gives artists the opportunity to connect by having features that allow people to contact one another. Bornholtz links his email to his account in case producers want to reach out to him.

Bornholtz finds inspirations for his songs by playing a beat while playing video games and just freestyling. Once he has found something he likes, he shuts everything off and just writes.

“The first song that I released, it’s not on my Soundcloud anymore, was called Purple Dreams,” Bornholtz said. “Growing up as a kid I used to daydream a lot but I didn’t like the title daydream. So I put purple for day because I feel like when people think of purple they think of a happy time period.”

Since the beginning, Vianello has always played the bass, the guitar, the drums and sung for his songs. He records them all separately and then edits them together.

“I usually do the music first because writing lyrics is hard for me in particular because I really want them to sound poetic and meaningful,” Vianello said. “Creating music comes naturally to me and I can think about what I want to record in my head.”

Both Vianello and Bornholtz taught themselves how to edit. For Bornholtz, one of the disadvantages of Soundcloud is the decrease in the music quality.

“When you’re hearing it in the studio with your headphones, it sounds really good,” Bornholtz said. “But then you have to go the extra mile to make it sound even better then it was because Soundcloud since it’s free, tones the quality down.” 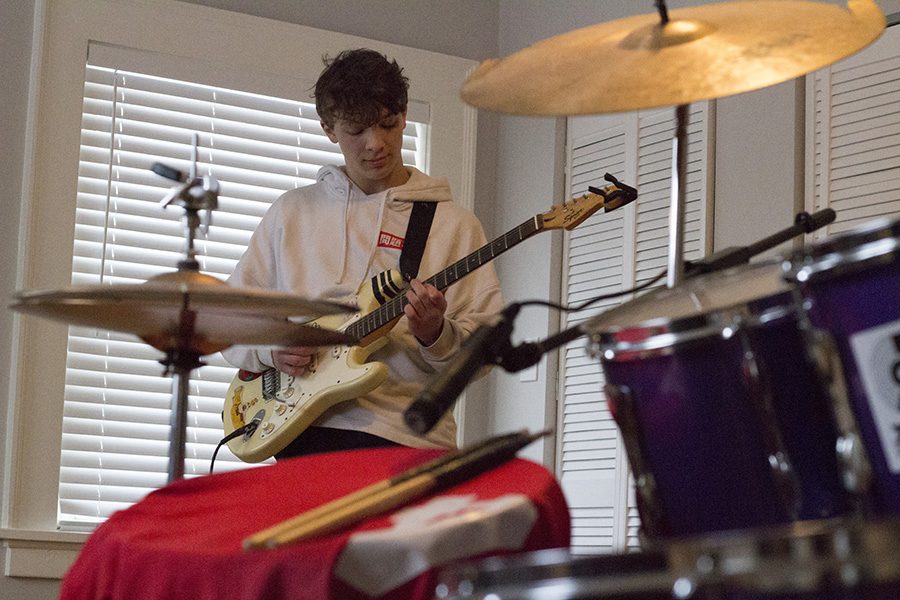 Approximately 12 hours of audio are uploaded to Soundcloud every minute. For STA senior Maureen Egan, this can sometimes be an issue.

“It can be hard if there’s a specific song and you don’t know who sings it because if you look it up there’s so many songs,” Egan said.

Egan likes Soundcloud because it allows her to discover a variety of new music.

“It’s a lot more loose and if you don’t have a specific playlist, you n

ever know what’s going to come on next,” Egan said. “I think it’s cool because that’s how you find new songs and  new artists.”

Music platform aside, Vianello’s parents have been very supportive of his music and encouraged him to follow his dreams.

“My parents are really into music so I’ve always been surrounded by it and I think that helped with my love and passion for it,” Vianello said. “My dad is a really big fan of music so whenever I finish a song, he critiques [it]  because his opinion is pretty important to me”

Vianello hopes to go into audio engineering with a minor in business in the future.

“I want to go into music production instead of just like performing because I feel like it gives me more opportunities to work with other people,” Vianello said. “If I knew how to produce music, I could create music the way I wanted to and not have to under the command of someone else.”