“The Westside Local” is a hip dinning spot in a rapidly developing part of Kansas City.

“The Westside Local” is a hip dinning spot in a rapidly developing part of Kansas City.

An examination of gentrification: A look at Kansas City

Neighborhoods are rapidly changing, even in K.C., but at what cost?

Gentrification. It’s become a buzzword in recent years, popping up in articles and podcasts alike. It’s a word that is too often vaguely defined and leaves the bad taste of a negative connotation in the mouth. But what does it really mean? Why is everyone just now starting to talk about it?

As defined by Michael Frisch, director of the Urban Planning and Design Program at the University of Missouri-Kansas City, gentrification is a process of neighborhood change where incoming residents have greater financial resources than existing residents.

“I don’t think that gentrification is necessarily bad,” Frisch said, adding that there can be “possible harmful effects.”

Journalist and author Peter Moskowitz tackles the widely misunderstood topic in his book, “How To Kill A City,” which follows gentrification and displacement processes in four major cities: New Orleans, Detroit, New York City and San Francisco, to not only emphasize the widespread nature of the phenomenon but to reveal that different cities don’t gentrify in the same ways.

“When you consider the scope of the problem, it becomes clear that gentrification is not a fad or a trend,” Moskowitz wrote in “How To Kill A City.”

He describes gentrification as a game of sorts in which “there’s a losing side and a winning side.”

Part of this game can include tension in gentrifying communities. Frisch explains that incoming residents in a given neighborhood often have different cultural characteristics than the area’s longtime residents.

According to a study by “Governing” multiple neighborhoods in Kansas City have begun a process of gentrification since the year 2000, including Westside, Union Hill and Westport, along 39th Street.

“When a community’s going through neighborhood change, it’s important to recognize that different people might have different community standards,” Frisch said.

He cites a hypothetical example of this clashing of cultures that could conceivably play out in the Kansas City area.

“An example might be that new residents of the Westside neighborhood are less likely to have children than existing residents or long-term residents to the Westside, and children playing may create noise and [new residents] can be less tolerant of noise,” Frisch said.

Although his example is hypothetical, the area mentioned is a classic example of a neighborhood undergoing rapid change in Kansas City.

Gloria Ortiz-Fisher is the executive director of an organization called Westside Housing which works to provide affordable housing in neighborhoods all over Kansas City. 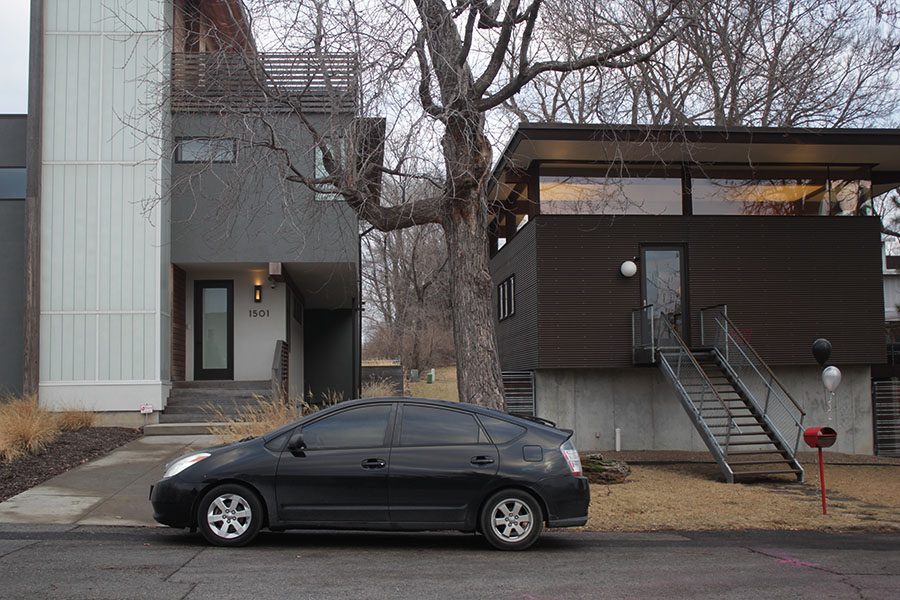 “We are in the business of creating and giving homes to people that otherwise may not be in a home,” Ortiz-Fisher said.  Westside Housing got their start in the Westside neighborhood in the early 70s by working to improve homes in disrepair as well as trying to save homes from being torn down for highway construction.

Ortiz-Fisher began as a volunteer, gradually working her way up to the executive director position.

“I will tell you that was never the plan,” she said. “But what I found is that I was really passionate about this organization and what I thought the organization could accomplish.”

According to Ortiz-Fisher, the Westside neighborhood is best described as a mixed-income community.

This idea of a diverse community that’s not only mixed in terms of income, but in terms of culture, ethnicity and religion as well, is what truly creates a “healthy” community, according to Ortiz-Fisher.

Ortiz-Fisher, a Kansas City native and granddaughter of Mexican immigrants speaks proudly of her Westside neighborhood but cannot ignore the negative change that’s beginning to overwhelm greater Downtown. She explains that part of the reason why Westside is so attractive is because of its proximity to downtown: an area where so many Kansas Citians work but are unable to afford rent.

“The woman that needs to work in the restaurant and clean the dishes or the man that needs to sweep the front door of the hotel, they can’t afford to live downtown, near their jobs because the apartments are so expensive,” she said, citing One Light KC as an example.

The luxury apartments are located on 13th Street, in the heart of downtown, and a two bedroom two bathroom studio can rent for nearly $4,000 a month.

“We, the greater Kansas City, are allowing that to happen, to develop, and it’s only going to be one kind of people. A professional person that makes a lot of money,” Ortiz-Fisher said.

But the million dollar houses on the hill and the market rate apartments downtown don’t just cost those that chose to live there.

“As more market stuff comes in around us, taxes are going to increase, and Mrs. Garcia down the street, who used to pay 10,000 for her taxes, may have to pay 11, 12 or 13,” Ortiz-Fisher said. “And that might not be affordable.”

Frisch believes that the issues created by gentrification present urban planners with a serious question.

“How [do] we provide for housing as a human need versus how do we create an effective market that produces housing that anyone and everyone has the opportunity to participate in?” Frisch said. Frisch offers healthcare as a similar example of a necessity that not all have access to.

“There are folks who can’t afford healthcare but it’s a human need,” Frisch said.

Still, Frisch’s understanding of gentrification is by no means one-sided.

Frisch suggests that the negative consequences of gentrification can often outweigh the positive outcomes.

“The idea of uprooting people from the neighborhood where they grew up is frightening,” Frisch said.

Moskowitz’s book is largely to devoted to these human issues: “the displacement, the loss of culture and the influx of wealth and whiteness” in neighborhoods. More simply put, “the decreased affordability of life for everyone,” Moskowitz wrote.

He clarifies that this shift is shaping cities across the United States, not because of an organized hipster conspiracy, but because of years of inequity and racism in housing policy.

But according to Ortiz-Fisher and Frisch, there are ways to mitigate the by-products of gentrification, especially in Kansas City.

“We could build more affordable housing in areas that are undergoing rapid change [and] we could build housing for the elderly who may not be able to afford the higher property tax,” Frisch said.

Ortiz-Fisher’s non-profit does both of these.

Another way in which traditionally low-income communities can combat rising property taxes that come with development is by getting an “urban renewal area” designation from the city.

“It allows people who are living in their homes to then go down to the city and pay thirty dollars and they can hold their taxes at a steady rate,” Ortiz-Fisher said. “In other words, taxes will not go up for 10 years.”

Moskowitz believes that the process of gentrification is “the inevitable result of a political system focused more on the creation and expansion of business opportunity than on the well-being of its citizens.”

More simply, Ortiz-Fisher feels that any progress made is important in the community.

“What I would like at the end of this is to know that when I came here the neighborhoods were whatever they were and when I left it was better,” she said. “I feel like this is my God’s calling: to make housing better in Kansas City.”