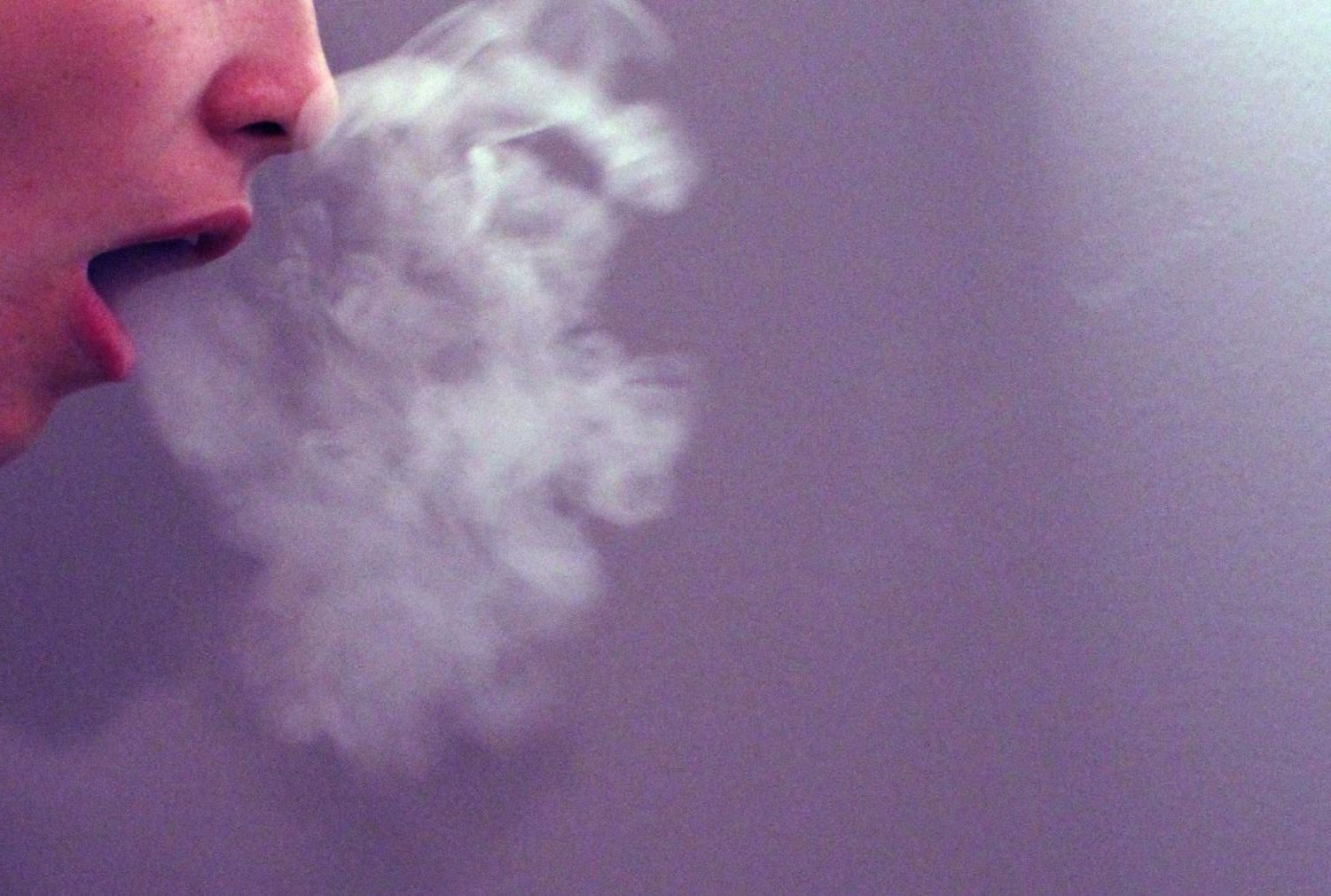 Vaping: Blowing into the unknown

As e-cigarettes and vaping products have amassed a teenage audience, the Dart investigates its health effects.

by Gabby Staker and Annabelle Meloy

Allie* found herself sitting in his grey minivan at some point she can vaguely remember from her sophomore year. He was a friend of hers: an older friend. He offered her his e-cigarette. She hesitantly accepted. It wasn’t something she was particularly interested in doing, but she wanted to impress him.

She had smoked real cigarettes before, but the e-cig was different. It was physical. Each hit was highly concentrated with nicotine that left her head feeling dizzy and her body feeling light.

It wasn’t an enjoyable buzz, but an addicting one, one that trapped her and shook her when she tried to stop.

“That’s how it started,” she said.

She was consumed with paranoia that she would be caught and her parents would find out, but she had to do it at school to avoid the shaking and the headaches. She needed it to get through the day.

“It was like getting caught was less important than just dealing with the side effects of withdrawal,” Allie said. “I felt like I had to do it… because not doing it wasn’t necessarily painful, but it was really difficult.”

She knew that she needed to stop.

The creation of vapor products can be traced back to 1963, when the first electronic cigarettes were patented by a man named Herbert A. Gilbert, though his idea remained largely ignored until 2003 when Hon Lik, a Chinese researcher, invented the modern vapor product people use today.

Lik’s goal in creating a vapor product was to curb his own cigarette addiction and to save others from lung cancer which his own father passed away from. His model from 2003 has been modified over the years to make it sleeker and smaller for users, eventually leading to what teens use today.

Modern vape pens are fairly simple and comprised of three main parts: an e-liquid cartridge to create the actual vapor, an atomizer which heats the product and a battery to charge the atomizer. New systems for vaping have developed among the growing number of users such as vaping pods.

Teens have begun to use two types of pods: Juul and Phix. The Juul vaporizer resembles a flash drive, making it easier for students to conceal at school. Different flavors ranging from fruity flavors like mango to creme brulee can be added to the E-liquid or E-juice in the Juul to create a more appealing smell while vaping.

Phix pods are taller, diamond-shaped and contain four different flavors from the Juul pod including strawberry, spearmint, ice tobacco, and butterscotch. In response to these flavor additives, faculty around STA have been more aware of strong scents around the school in hopes of being able to reach out to students who might be addicted. Theology teacher Jennifer Greene believes coaching someone through their choices is the best way to help.

“You have to figure out the currency of the teenager you’re talking to, meaning what’s the value that’s going to click,” Greene said. “Maybe for the athlete, it’s the athleticism, maybe it’s the fear of getting in trouble, maybe it’s the future at college. Somehow, you have to make a connection between their experience and a consequence.”

“I knew the whole time, but at one point I just kind of didn’t care. But then I started to realize that it was taking a toll on my body.””

Traditional cigarettes spark a combustion of chemicals when lit and release nicotine directly into the smoker’s bloodstream through the lungs, building up tar and causing lung cancer. Addiction sets in with the release of dopamine in the brain, a chemical that is associated with pleasure.

That combustion process does not occur when vaping, but instead, the products are aerosolized, and the user still feels the effects of smoking without the damaging impact of smoke inhalation.

Although smoke inhalation has been eliminated in the process, the effects of vaping have become harder to define. Results have been extreme one way or the other from much healthier than cigarettes to extremely dangerous according to a study on vaping done by Jessica Pepper, PhD, from the UNC Gillings School of Global Public Health.

“You’ve got one study that says e-cigarettes have one-tenth to one five-hundredth of the amount of chemicals that are in cigarettes, but you’ve got [another] publication that says certain e-cigarettes, used in a certain kind of way, can produce as much formaldehyde as a regular cigarette,” Pepper said in a 2014 study.

Regardless of the unknowns, many teens choose vaping as a better option as they believe it’s healthier and less addictive than cigarettes. However, Greene believes there is no way for students to know the actual effects of vaping.

“Nobody can really agree on what it is, nobody can agree what’s being done, nobody can agree on the level of nicotine or addiction,” Greene said. “So you just have a lot of kids doing something that they think looks cool, but they really don’t know the effects of it, and that’s what’s concerning both as a teacher and as a parent.”

Despite chemical additives, more than 3 million teens across the United States vape consistently, and they are seven times more likely to transition to regular cigarettes later on in life, according to a 2017 study done by Krysten W. Bold, PhD, from the Department of Psychiatry at Yale University’s School of Medicine.

The number of teenagers across the country who use vape pens or e-cigarettes has only continued to grow in the past years, and there is no evidence that it will slow down anytime in the near future. With more teens starting to vape, the e-cigarette industry is expected to grow 24 percent per year through the end of 2018, according to a Feb. 2017 article from the Huffington Post.

Perhaps the most prevailing argument supporting why usage of e-cigarettes has grown reverts to its original purpose: curbing cigarette addiction. It’s what the California Department of Public Health calls, “harm reduction,” or determining whether the known effects of vaping are less detrimental to health than natural cigarettes.

For Shawnee Mission East student Sam*, the answer is clear and simple.

Sam chewed tobacco until his friends encouraged him to hit an e-cig for the first time. He stopped dipping and started vaping — he then employed the same strategy to help his dad stop smoking cigarettes.

“It’s a healthier alternative to smoking cigarettes,” Sam said. “And it doesn’t leave that smell on your clothes. You can do it almost anywhere and it’s just healthier. There’s just two bad chemicals in it and they aren’t even that bad.”

Vaping has largely made its entrance into the high school party scene, but according to Allie, teens are still divided on its attractiveness.

“Before [I started], I always thought vaping was super uncool,” she said. “And there’s kind of that stigma that surrounds it, where I feel like there’s two different cultures: people who think vaping is really cool and people who think it’s really stupid.”

Part of the reason Allie continued using e-cigarettes was the influence of her friends.

“I think, just from what I’ve noticed with the people around me, is that more and more people are starting to use it,” she said. “More and more technologies are being developed. I think it’ll be around for a while.”

For many students using vaping products, the effects they feel can be varied in intensity and unique to their experience.

“It’s a very physical feeling when you’re using an e-cigarette, especially one with a high nicotine concentration,” Allie said. “It’s a physical thing, and so how it affects each person is really different.”

While an interest for vaping has grown in younger generations over the last decade, opposition has grown with it from older age groups, especially those in the medical field.

Dr. Marion Pierson has worked as a pediatrician in Kansas City for the past twenty years of her career, where she has daily conversations with kids and teenagers about cigarette, e-cigarette, hookah, marijuana and prescription drug usage.

“There are lots of things about our health that we cannot control,” Pierson said. “But then there’s things in our lives that we can control that affect our health.”

Pierson has had experiences with younger patients where she’s been able to counsel them on the things they can control. Once an eleven-year-old patient asked Pierson if there was a way to vape that would be healthy for him.

“He must have gone, ‘Well maybe there’s some way I can engage in something that is obviously seen in a way that must be harmful,’” Pierson said. “And so we had a pretty frank conversation, and I said, ‘There isn’t a way to vape without it being harmful.’”

“There are lots of things about our health that we cannot control, but then there’s things in our lives that we can control that affect our health.””

Contrary to teenage perceptions of vaping as a healthier and less-addictive alternative to other smoking products, medical professionals like Pierson argue that vaping can be just as detrimental as regular cigarettes.

Her ideas about the attractiveness of the Juul pen are backed by a CDC report estimating that more than 18 million (7 in 10) U.S. middle and high school youth were exposed to e-cigarette advertisements in 2014 alone.

Truth Initiative, an organization responsible for much of the research and campaigns against tobacco usage in the United States, assessed the unrestricted marketing environment for e-cigarettes in 2014 and its impact among 13 to 21 year olds. They found that five main e-cigarette brands controlled 95 percent of the market and were all owned by Big Tobacco companies: blu, MarkTen, NJOY, Vuse and Fin.

Those brands spent $75.7 million in 2013 and $115.3 million in 2014 — a price increase of nearly $40 million. Their advertisements are featured in print magazines such as Rolling Stone, ESPN the Magazine and Sports Illustrated, and range from blu’s “Clearly ahead of the pack” slogan to Fin’s “Welcome back.”

Greene likens the new marketing of e-cigarettes to a wave of cigarette advertisements back in the 1950’s and 60’s.

“You make that jump, and you can clearly see like cigarettes at the time, they’re exploiting teenagers,” she said. “And they’re aiming it towards teenagers so they get them hooked. Cigarettes did the same thing. They targeted teenagers, they sent them to the military to soldiers in wars, and they would get them addicted. So they just follow the money.”

“People start at that entry level, thinking, well maybe this isn’t so bad,” Pierson said. “But the truth is, that opens the door for a lot of people, when they didn’t even intend on going somewhere else with it.”

The door had opened for Allie that day in that grey minivan. It took being caught at school for her to finally shut it a year later.

*Names of students who wish to be left anonymous have been changed.

One Response to “Vaping: Blowing into the unknown”