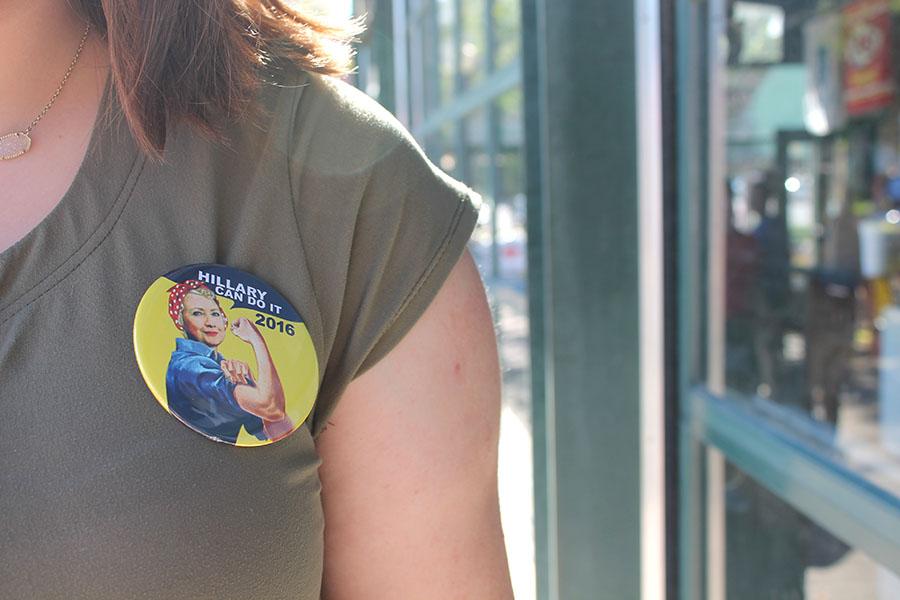 Young voters make an impact in an election like no other

With the two nominees America has chosen, many say the youth vote will play a huge part in the outcome of this year’s election cycle.

2016 Election
Create your own infographics

A businessman who has built a real estate empire and showcased his talents on the reality show “The Apprentice”.

A former First Lady, practicing lawyer and NY Senator who served as Secretary of State under President Barack Obama.

America has chosen two contrasting personalities to serve as the 2016 Presidential Nominees, creating no middle ground for voters.

This is the belief of social studies teacher Patrick Nielsen, who finds this election different than in previous years because of the nominees America has chosen.

“This is an election that is between two very polarizing candidates,” Nielsen said. “In the past, we’ve had candidates where… you might not really like the candidate, but you can respect that they might do a pretty good job as president.”

Nielsen’s belief touches on the growing concern that Americans will vote based on their dislike for one candidate. In a report by Pew Research Center, 33 percent of Trump supporters and 32 percent of Clinton supporters are voting at least partially because of their opposition for the other candidate.

But Nielsen believes middle-of-the-road voters will have a tough time casting their vote for president, largely due to the change for which he sees many Americans clamoring.

“I probably would have said four years ago that this would have been an election where people were going to want some sort of great change,” Nielsen said. “We saw that on the Republican side specifically, where people didn’t want a typical politician… We’re seeing that in our presidential candidates more so in [Republican nominee Donald Trump] than in [Democratic nominee Hillary Clinton], but we’re still seeing some sort of big change and big shift.”

Much of this change has been spurred on by former Democratic candidate Bernie Sanders and implemented by young voters, according to senior Marin Brown. She attests Sanders’ relative success with young voters to his authenticity.

“I do respect [Sanders] for being that candidate that really sparks young people’s want to be politically involved and be politically active, because what he said was what he believed and he wasn’t making it up,” Brown said. “He stuck to his guns and that’s what America, especially American young people, want today.”

She believes Sanders “tapped into” what intrigues the youth: social mobility and social progress. However, she does not view this as young voters’ highest priority.

“Both Trump and Hillary have tried to tap into that but they can’t,” Brown said. “Our generation craves authenticity, and that’s why I think Trump is doing so well with younger voters and different Americans, because he says what he thinks and is brash, while Hillary is very calculated.”

Nielsen concurs that Trump’s impact may not be as large as Sanders’, but that Trump is shaping the election in different ways.

“I don’t think we’ve seen anyone speak their mind so much as Donald Trump has and kind of get away with it,” Nielsen said. “He doesn’t have to raise a lot of money because he has such great name recognition. And even with someone like Hillary, who has great name recognition, who’s been around politics forever, has had to raise a lot of money, so he’s made a big impact in that his path to the candidacy for president has been very different.”

Clinton and the Democratic Party, as well as her primary super PAC, had raised over $700 million as of the end of August, according to the Huffington Post. PACs, or Political Action Committees, are responsible for pooling money from its members and donating these funds to campaigns. Super PACs differ from PACs in that they have no limits on the amount of money donors can contribute. The support Clinton gets from her super PACs concerns some voters, including senior Jeannie O’Flaherty.

“How she was supported by a lot of super PACs…was just questionable,” O’Flaherty said. “Super PACs are, from my understanding, mostly made up of people who are already well-off and in control of the government and wealthy…I would just rather the support be from people, rather than money.”

In the timeframe Clinton has raised $700 million, Trump, the Republican Party and his three largest super PACs have raised more than $400 million. As another testament to Trump’s name recognition, Clinton’s campaign has been producing television advertisements for a year longer than Trump’s has; he released his first campaign ad this August, while she has been airing ads since August 2015.

No matter the money a nominee will spend on their campaign, the decision comes down to the vote of the American people, and Brown believes that young voters especially will play a huge part in the 2016 election.

“Because of people at such a young age becoming jaded by the political system, some will not vote,” Brown said. “I think young voters will be the determining factor, whether they are voting or not voting.”

Junior Claire Witt agrees with Brown that young voters will play a determining role in the 2016 election, but also think that most of them are still contemplating who to vote for.

“A lot of [young voters] I don’t think have really picked [a candidate to support] and are waiting for the debates before deciding, so I definitely think they will have a big influence [on the election],” Witt said.

Brown is a self-proclaimed conservative and has worked on two campaign trails in the past year, for former Republican candidates Marco Rubio and Jeb Bush. Though she will not be able to vote by Election Day, she finds this election so intriguing because of how unhappy Americans seem to be with the candidates chosen.

“The problem with both Trump and Hillary is what they embody,” Brown said. “Hillary embodies everything the democratic party wanted to get away from – very elitist, very high-up, has been in the game for a while. Trump is everything that the Republican party doesn’t want.”

According to Brown, after the 2008 election, the Republican party did a “diagnosis” of how they wanted to present their party going forward. To Brown, it seems like they ignored this diagnosis when they named Trump the Republican candidate.

O’Flaherty disagrees with the idea that Clinton will not implement policy as promised.

Though Witt will not be able to vote this November, she supports Republican nominee Donald Trump.

“I think both candidates have shady pasts,” Witt said. “I think issue-wise I tend to go with Trump more with immigration and securing our borders.”

Because Trump does not have a background in politics, Witt finds herself supporting him more.

“Politicians on both sides of the party are corrupt a lot of the time and so coming from someone who is a citizen without this background, who has watched America just like we all have, [I feel like] he wants to give equal opportunity to everyone no matter race, gender or where you come from,” Witt said.

Witt isn’t the only American who feels this way. Pew Research Center also reported that 27 percent of Trump’s supporters cite the fact that he is a political outsider as their reason to vote for him in this election.

O’Flaherty said she would have voted for Sanders in November, but now is voting for Clinton, “the lesser of two evils.”

“I supported Sanders because he was basically almost spot-on on my beliefs,” O’Flaherty said. “It still is conflicting for me because [Clinton’s] beliefs on things and the stand that she takes on issues a lot of times goes back and forth, but where she stands now, a lot of the things, I agree with”

Though Brown, Witt and O’Flaherty do not support the same presidential nominee, they all agree on one thing – the importance of young women staying informed and involved.

“I say do your research,” Witt said. “It doesn’t take very much time. Look at what these people believe and what you want to support, support it.”

Witt also says discussion with her parents helps inform both herself and her parents.

“I wasn’t very involved until the DNC and the RNC and then I started talking to my parents about it, and obviously they can vote, so I wanted to try and understand where they were coming from on their positions,” Witt said. “I guess me doing all the research helps them understand, because I keep them informed and I’m helping them figure out where they stand as well.”

Brown, too, thinks conversation among parents, peers and friends helps people get more involved and informed.

“I think it’s important to talk to people and figure out what your friends and your colleagues and classmates believe, and more importantly why they believe that because that’s what politics is,” Brown said. “Politics is about people and their reactions to what’s going on in their world and how they want to govern and how they want to be governed.”

O’Flaherty receives most of her political information from reading and watching the news and feels strongly that there is “so much” value in being politically informed and involved.

“Even though there’s a common stigma that your vote doesn’t really matter, I think to have that perspective kind of…diminishes the significance of America being a democracy,” O’Flaherty said. “That’s also why we’re lucky in America because even if it’s just a little change, we have the power to make a change, and that’s only gonna happen if you make an effort to know what’s going on in our world and in our country.”