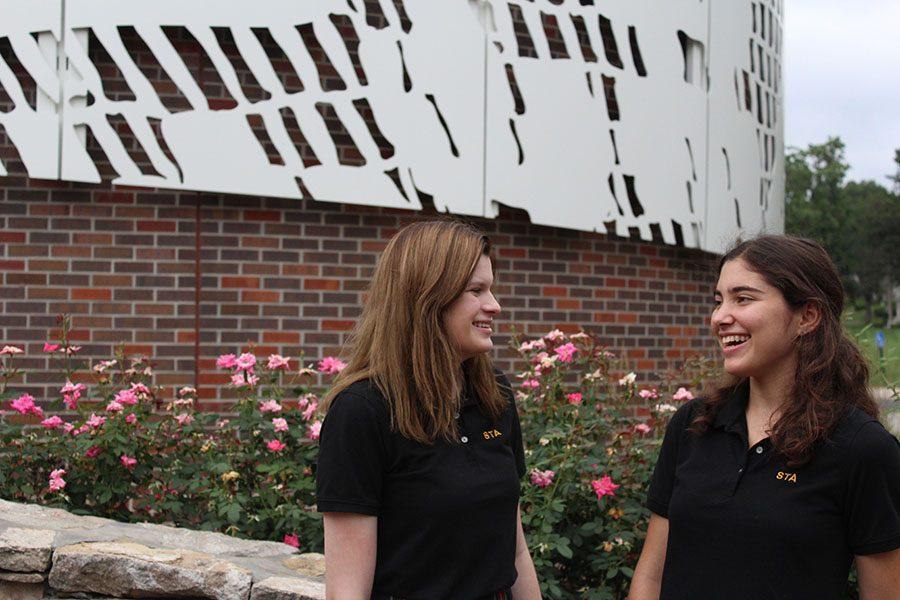 Senior transfers Jordan Trbizan, left, and Emma Zanher, right, laugh as they talk about their experiences at STA. photo by Meggie Mayer

Q&A with the class of 2017 transfer students

The class of 2017 has had two students transfer in, one from Canada and one from New Jersey. Both moved to Kansas City over the summer.

by Alexandra Frisch and Meggie Mayer

The Dart: When did you move to Kansas City?

Trbizan: About four weeks ago.

The Dart: What brought you to Kansas City?

Trbizan: My mom works at General Motors, the company that makes Chevrolet, Buick and the GMC trucks. She was transferred over here.

The Dart: Can you describe your home town?

Trbizan: My home town was about a thousand people. It was called Mt. Bridges, but we didn’t live in Mt. Bridges exactly. We were roughly two minutes away from Mt. Bridges, and my home town was pretty much just one road. It was a country road. We lived on 14 acres, and now I live in an apartment, which is super weird. It’s a big difference. I like it though, I like being in a city. I used to live 30 minutes away from my school. We had buses, but it was an hour and a half bus ride. The ride to school (by car) was just 30 minutes so as soon as I got my license I started driving to school.

The Dart: What was the weather like in your home town?

Trbizan: It would start getting cold in December and then it would stay cold for a long time. It snowed in May last year.

The Dart: What similarities have you noticed between Kansas City and your home town? What about differences?

Trbizan: Other than the language, not much is the same, but I haven’t ventured out much into Kansas City yet. I’ve been to the Plaza, and noticed a lot of differences. The roads are so narrow here. Grocery stores are really different here…you guys don’t even have ketchup chips. You are missing out. They’re chips but they don’t taste anything like ketchup and they’re really good. The school is so different too. My classes used to be an hour and 20 minutes. It started at 8:05 a.m. and ended at 2:05 p.m. We had 45 minutes for lunch and you could do whatever you wanted, you could leave whenever. We had “spares” like free periods, but if you were a senior you could leave during yours.

The Dart: What has been the hardest thing to adjust to?

Trbizan: Probably school because it’s an hour longer and I left all my friends, which was difficult. Also, I used to have four classes a day and now I have seven or eight and they’re really short. We also didn’t have tablets or anything. They’ve been kinda hard to use but they’re actually pretty nice to have, especially in class when I can type on them. Even the teachers here are different. They’re all really young, and at my old school [the teachers] all had grand kids.

The Dart: Why did you choose STA as opposed to other Kansas City high schools?

Trbizan: We visited The Barstow School, Notre Dame de Sion High School and STA…I loved the campus feel at STA, and the admissions people were so nice and so helpful. They told me they’d get me into contact with the other transfer student that was coming and with other people. Also, you guys had a lot of courses to choose from. But mostly you guys were just really nice.

The Dart: Do you plan on going back home for college, staying in Kansas City, or going somewhere totally different?

The Dart: How is college different in Canada vs. America?

Trbizan: Well in Canada we call it “university,” and it’s almost like community college. But it’s not a lower level of education or anything, it’s just that you usually go to university and then a more specialized school after that, like teaching college or mechanics college. College is really expensive in both countries though. My brother, who goes to college in Canada, literally just bought a $1,000 textbook.

The Dart: How much French influence was there in Canada?

Trbizan: It depends on where you go. In some towns or cities, like Quebec, everyone speaks French. But if you go into a grocery store or something the signs will all be in French and English, kind of like how signs will sometimes be in Spanish and English here. At least half the schools are French immersion schools.

The Dart: What has been your favorite part of Kansas City?

Trbizan: Everyone is so nice here and so polite. My family went to a restaurant, and everyone was saying ‘hi’ to us even though they didn’t know us, everyone would open doors for us, everyone is so nice. The Plaza is awesome too. I looked up pictures of it during Christmas time with the lights, and I’m so excited to see it lit up.

The Dart: What has been your favorite part of STA?

Trbizan: Definitely not waking up so early. Also, everyone’s been so welcoming. Even in the class GroupMe, everyone was so welcoming to me and Emma. At first, I hated walking between the buildings because I’d be out of breath and almost late for class, but now I actually like it because you get to go outside and you’re not sitting in a chair all day. Also, I really like the frees. You can get all your homework done at school and then go home and watch Netflix. It’s great.

The Dart: When did you move to Kansas City?

Zahner: I got here on July 2nd.

The Dart: Did your whole family move?

Zahner: Yeah, except for my brothers. One goes to grad school, so he lives in Tennessee, and my other brother goes to college in Colorado.

The Dart: Why did your family move to Kansas City?

Zahner: My mom has wanted to move here for a while now because she has family that lives in St. Louis and my dad was tired of his job and he got a job in Kansas City.

Zahner: Well, I lived in St. Louis for eight years. But where I lived in New Jersey was semi-rural so you had to drive everywhere, and the closest mall was 20 minutes away. There was only about 18,000 people. Everyone had giant yards that weren’t that close together.

The Dart: Are there any similarities between Kansas City and your old city?

Zahner: Not much is the same.

The Dart: What’s different between the two cities?

Zahner: The people definitely. There’s way more diversity in Kansas City than where I used to live. There was way less to do. In my old city, you were kind of out of touch with what was going on in the world because it was kind of a small town. You’d never see a protest or anything like that.

The Dart: What’s been the hardest thing to adjust too?

Zahner: Probably just getting to know the city. Trying to find my way around the streets without using Google maps.

Zahner: It was a nice school. It was more cliquish than this school seems to be. I had my good friends. Overall the teachers seem mostly the same. There’s a lot of similarities between the teachers here and there, which is kind of funny.

The Dart: Do you plan on staying around Kansas City for college or going somewhere else?

Zahner: I’m not going back to New Jersey. I think I want to go somewhere kind of close to here but not too close, like Chicago maybe. It’s so nice, I really love that city. It’s not as crowded as New York or somewhere similar.

The Dart: What’s been your favorite part of Kansas City?

Zahner: The Plaza probably. There’s a lot to do around there, like shopping and stuff. It’s also close enough to where I live that I can just walk there.

The Dart: What has been your favorite part of STA so far?

Zahner: I like the free periods, because I never got that at my old school and it’s awesome to be able to get so much work done during the day.

Zahner: It was a public school so it was pretty different from here.

The Dart: Was it hard moving cities in your senior year?

Zahner: Yeah, because I want to be with my friends and I have to get used to everything while planning for college at the same time, so it’s a lot of stuff to think about. But I guess it’s good because it’s getting me ready for the transition of college.