STA students travel from many different zip codes in order to attend the college prepatory school. photo by Violet Cowdin

STA students travel from many different zip codes in order to attend the college prepatory school. photo by Violet Cowdin

The Dart explores the STA experience through the perspective of students from various zip codes.

Rolling out of bed at 7:00 a.m., junior Nicole Snow curses the school gods for making her wake up so early. By the time she throws on her uniform and snags some breakfast, the clock is already nearing 7:30 a.m. Still somewhat asleep, she stumbles out the door and jump into her car. She makes her down 56th street, and after a five minute drive, Nicole pulls into the nearly full parking lot and races into advisory.

Senior Payton Seever, however, wakes up at 5:50 a.m., realizing that she accidentally pressed the snooze button and has lost that precious five minutes of time. Trying to make up for it, she pulls on her uniform as quickly as possible and makes her way downstairs. She hurriedly packs her lunch and gobbles down some breakfast, and before she knows it the clock is hitting 6:25 a.m. She rushes out of the house, aware that if she does not leave in the next five minutes, she will be late. Shutting the car door, she settles in for the 30 mile drive to school. Sick of hearing Justin Bieber’s “Sorry” nearly “49 million times,” she spends the time listening to a TED talk, followed by an informative bit on the National Public Radio (NPR). A long hour later, Payton pulls into the parking lot and heads to her second floor advisory.

According to Junior Bailey Mitchell, the cliche of an STA girl in the morning is that “sleepy eyed, crazy haired, rolled out of bed ten minutes ago look.” But what happens to the student that had to get out of bed hours ago, that does not enjoy the luxury of proximity to her school? Does she worry about how her classmates perceive her based on where she lives, or if she is missing out on the true St. Teresa’s experience?

Junior Haley Shaw lives one and a half miles east of Troost Avenue, traditionally marked as a racial dividing line in Kansas City. Shaw and her family have lived in an area called the Scarritt neighborhood, more well known as the Northeast Neighborhood, since she moved from Brookside at a young age. According to Shaw, she began feeling the losses of where she lived as soon as first grade, as she was often left out of the social aspects of grade school since most of her St. Peter’s friends could walk to each other’s houses.

But more importantly, Shaw encountered the stereotypes of living east of Troost. Throughout her time at St. Peter’s, she constantly heard her classmates talk about how east of Troost was “ghetto” and how going there would result in being killed. Shaw blames the ignorance on lack of experience with the area.

There are nice people everywhere. There can be nice neighborhoods east of Troost.”

“I’ve lived east of Troost since I was four and I’ve never been afraid of that,” said Shaw. “There are nice people everywhere. There can be nice neighborhoods east of Troost.”

Shaw believes that where she lives has made a large positive impact to the person she is today by making her a more cultured person. According to Shaw, unlike areas such as Brookside and Lee’s Summit, her neighborhood is home to people from all over the world. Shaw describes the Scarritt neighborhood as constant exposure to many different cultures.

“On my drive home, I pass by a mosque, temples, different things that you wouldn’t encounter elsewhere,” Shaw said. “It’s hard for me to remember that everyone doesn’t always see that everyday.”

Self proclaimed “true Kansas Citian” and STA junior Catherine Parra lives in the West side, a predominantly Hispanic neighborhood close to downtown. Throughout her high school career, she has started to embrace her neighborhood more with its recent increase in popularity including a newly refurbished corner of shops and restaurants at 17th and Summit.

At the beginning of freshman year, Parra was hesitate to tell others where she lived, but now sees it as a unique trait defines a part of her.

“I don’t care that I don’t live in Brookside, because I’m different, and where I live is unique to me and it makes me feel special because not a lot of people live down where I live,” Parra said.

Parra, like Shaw, still faces the challenge of being out of walking distance to her friends.

“I don’t like being far away from everyone and everything,” Parra said. “[I live about] 10-15 minutes away from school.”

Cotter, a sophomore, lives south of STA in the Lionsgate neighborhood off Nall Avenue. While most of her friends live in Brookside, Cotter believes that it has had no impact on her social life at STA. In Cotter’s opinion, even though she lives farther away, she thinks STA was still the right decision for her. She chose to attend because she loved the all school environment, and preferred STA over Notre Dame de Sion High School, because she loved the campus and the atmosphere.

Living South, Cotter says she receives a lot people associating her with the Southern Johnson County girl stereotype, living in a cul de sac neighborhood with each house looking the same, which she resents. For Cotter, another disadvantage to her living situation is that she feels out of the loop from the “cool” things downtown.

“As of two months ago I had never been to the Liberty Memorial,” said Cotter. “My friends made fun of me and then proceeded to take me.”

While Cotter likes the environment, small restaurants and scenes of downtown, she rarely gets to go there. She feels if she lived closer to STA and downtown she would enjoy getting to venture out there more, but right now it is too far a drive to do on a regular basis. 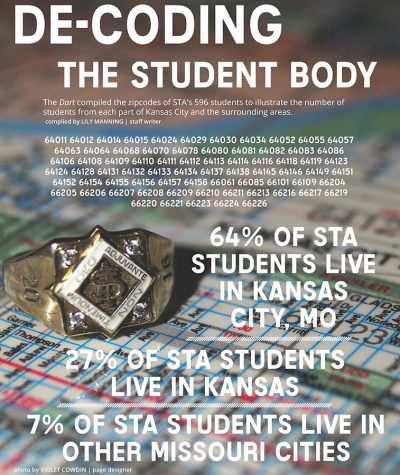 In the 1970s, former STA student Michelle T. Johnson’s morning routine remained very different from her peers. Living in Kansas City, Kan., attending STA meant a roundtrip 2 hour city bus with a transfer in each direction. According to Johnson, this at times left her feeling disconnected with that token STA girl experience. For her, it was a “special treat” to hang out with friends that lived closer to school, because it made her feel more connected.

“I thought, ‘What must it be like to live 30 seconds from school and not have two hours of your day taken with getting back and forth?’” Johnson said.

While she may have lacked at times in the social aspects of STA,  the bus rides and the people on them provided Johnson with a greater personal development. According to Johnson, she dealt with all kinds of people while taking the city bus, and with that had to be safe and had to be smart.

“The world wasn’t served to me,” Johnson said. “I had to meet the world where it was for two hours a day. It made me more resilient, more resourceful, independent, not afraid of being in a strange environment, able to deal with all kinds of people better.”

According to Director of Admissions Roseann Hudnall, St. Teresa’s, in recent years, has started  to draw from a variety of middle and grade schools.

“We draw in a freshman class we have between 30 and 40 different grade schools and middle schools,” Hudnall said. “When you look at all four years, you will see close to 60 – 65 different schools because we get different kids from different schools every year.”

Despite this growth in variety, Hudnall says the school has become very limited in how they can advertise. The school is only allowed to visit Missouri Catholic grade schools and some high school fairs, further limiting the pool of girls who choose to attend STA.

“It’s become very limited to what we can do anymore so we just have to get out there who we are,” Hudnall said. “ We do have the opportunity to send mailing to anyone we want. We really rely on our marketing pieces. They really tell our story.”

What we can do to promote a melting pot?

With recent sports championships and $9 billion funneled at downtown revitalization, Kansas City is at a high, but neighborhood stigmas hold the city back from complete unification. There are steps we can all take to prevent the harmful effects of these stigmas. According to Johnson, the solution is not to try to fix the problem but to create awareness. She believes is not focus on differences, but instead acknowledge them.

Learn to appreciate the uniqueness of people. To not try to make people bury who they are, or hide who they are so you can feel comfortable.”

“Being aware that everybody is having a different reality than you are,” Johnson said. “There is nothing wrong with acknowledging.”

This awareness is based in the necessity of a comfortable environment. Both Seever and Mitchell feel that they still receive the “token STA experience.” despite differing journeys to school. According to Johnson, the best to way to acknowledge someone is the make them feel comfortable to be themselves around you, so that you can better appreciate who they are.

“Learn to appreciate the uniqueness of people,” Johnson said. “To not try to make people bury who they are, or hide who they are so you can feel comfortable.”