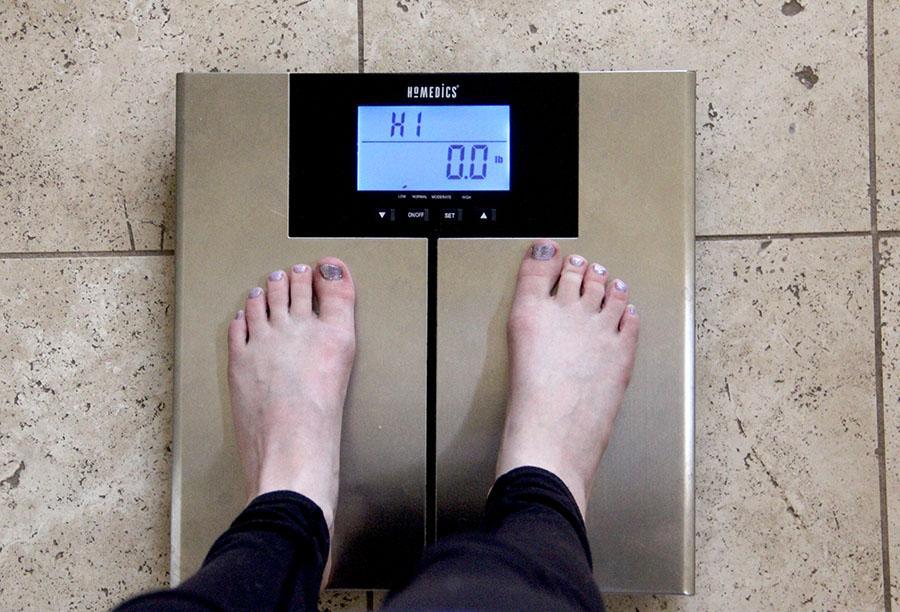 Students often use weight scales as a way to keep track of their progress when dieting for spring break. photo illistration by Zoe Butler

Students often use weight scales as a way to keep track of their progress when dieting for spring break. photo illistration by Zoe Butler

Girls from freshmen to seniors diet in preparation for their spring vacations, but while dieting can be a healthy lifestyle choice, it also can have dangerous consequences.

It’s 5 a.m. She rolls out of bed, slides her hair into a ponytail and grabs a granola bar for breakfast before going to the gym for an early morning workout. When lunch rolls around, she waits in the long lunch line and opts to eat a salad. When she gets home from school, she skips snack and waits until dinner to eat next. And that’s it.

This is the pattern more and more teens are following as dieting becomes increasingly popular in American youth. In recent years, dieting has become a trend among teenage girls going to far off destinations over spring break. From freshmen to seniors, it’s a common topic at lunch tables and with their friends. According to the National Association of Anorexia Nervosa and Associated Disorders, or ANAD, a study conducted in 2005 claimed over 50% of teenage girls use unhealthy weight control behaviors such as skipping meals and fasting.

“A lot of people – especially teenagers – diet for a specific purpose,” guidance counselor Amanda Johnson said. “Dieting can be tricky because it can be very short term. For teenagers, it’s often for a specific reason. Rather than the goal being ‘I want to be healthy,’ it’s ‘I want to be this size’ or ‘I want to look this way.’ So sometimes we do things that can be harsh for our bodies rather than making a positive lifestyle change.”

Starting among girls as young as freshmen, like Savannah James, dieting is a simple solution to feeling better and achieving the ideal body.

“Media nowadays not only plays such a huge role in how women are portrayed, but also the expectations of women,” says junior Mary Claire Connor, “We are basically given an unrealistic idea of how skinny and pretty women should be due to all of the photoshopping of every picture out there.”

“When you’re in high school, that’s the most critical [time] because everyone wants to fit that image of perfection.” James says.

Come spring break, freshman Isabel Shorter will be traveling to Colorado for a week-long vacation. In preparation, she is eating smaller meals more frequently throughout the day that she considers healthier. For Shorter, her eating habits are more of a lifestyle than a typical diet.

When she eats healthier, Shorter says “I feel healthy and better physically.”

Dieting, for many, is more than a tool to lose weight. For individuals like Shorter, dieting can give them comfort and security in their health.

“All last week I didn’t diet and I felt bad about it,” Shorter said. “I just didn’t feel as good physically.”

Connor agrees, “For me healthy living is extremely beneficial for all aspects in my life. Just by eating healthy and working out, my mood and self-esteem completely boost and I feel so much more motivated to do things.”

While dieting, for some, can be a healthy living choice, for many teenage girls, dieting can quickly become a slippery slope to dangerous choices. According to Eating Disorder Hope, 10 million women in America suffer from an eating disorder.

Guidance Counselor Amanda Johnson points to asking the question, “Why am I dieting?” as the first step in moving past unhealthy habits.

“What’s the purpose?” Johnson said. “Is this something that you plan to continue long term? Or is this something you’re doing to achieve a certain body type on a vacation, and then once that’s over it’s like ‘Phew, I can finally eat a cheeseburger again.’”

For James, dieting is about achieving what she and her friends call a “beach bod,” which “isn’t necessarily really skinny, but toned.”

A big influence on James’ idea of a “beach bod” comes from social media, she says.

“When I look at Instagram, all on the popular page is girls with teeny waists and big butts, exercise pages and advertisements,” James said.

Because of the advancement in photoshop, it’s impossible to know whether the photos in magazines are truly a picture of the person, or an edited depiction of a socially desirable person. There are new developments in phone applications that will photoshop your photos for you, with features to airbrush, apply makeup and make a person appear thinner.

Connor notices her own friends photoshopping their pictures to post to social media and feels that their desire to appear different than they actually look has a lasting affect on their self-image.

“When it comes to my friends posting pictures, they all photoshop, and it’s affected them over the years,” Connor said.

According to ANAD, 69% of girls from fifth through twelfth grade reported that magazine pictures influenced their idea of a perfect body shape, but in reality only 5% of American females naturally possess the that perfect body portrayed in media.

STA counselor Amanda Johnson is skeptical of the idea of “beach bodies,” seeing them as a “social construct and expectation that is set up for us through media.” While she understands the pressure teenage girls feel, she urges girls to examine their actions and evaluate their decisions thoroughly before making diet changes that will affect them for the rest of their lives.

“I get why people would want to look that way,” Johnson said. “It’s socially acceptable. But if you’re doing things to damage your body to get there, is it really worth it?”