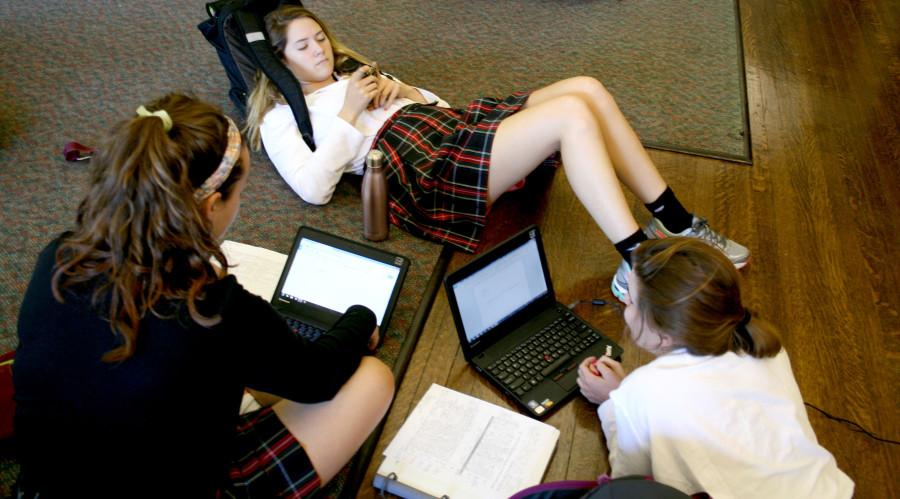 Juniors Rose Madden, Allie McDill and Anna Moore sit on their netbooks and phones during a free period in Mrs. Prentiss’s room. photo by Kate Scofield

How much is too much?: Education for a digital generation

With high school students now straddling two centuries, the Dart investigates how technology can be used in a modern STA education.

According to the Dart’s survey of 72 STA students, 100 percent use technology at school, and 93.1 percent of those students have concluded that technology is an important aid to them while learning. What does this show about our school’s initiatives for modern learning? With our education for a global generation, how much technology is too much technology?

Author and internet entrepreneur Peter Thiel defines technology as “any new and better way of doing things.” In an attempt to discover this “better way,” STA teachers and administration have taken steps to incorporate technology in and out of the classroom. Certain initiatives have brought about the addition of netbooks and 3D printers, along with the expansion of the “flipped classroom” technique. What do STA students and teachers think of this recent increase in technology? How much is too much?

Technology plays an important role in theology teacher Robert Tonnies’ classes. By using video clips and images to spark discussion and programs such as Moodle and Google Drive for readings and homework, Tonnies, who teaches Theology and Media, believes the amount of readings done in his class would not be possible without technology. However, he attributes the subtraction of certain technologies, such as netbooks, from class with strengthening class discussions and forcing students to be more present by limiting temptations posed by multitasking.

“Focus and attentiveness are two qualities, that we are, without being really conscious about it, allowing to kind of slip away,” Tonnies said. “I think we’d rather have those qualities, if given the choice.”

The loss of these qualities is not based solely on technology’s presence in the classroom, but on  the human tendency to experience media in small fragments, according to Tonnies. He attempts to combat this by giving his students both a diverse set of reading material as well as creating an environment where they can heighten their ability to focus.

According to science teacher Renee Blake, communication with teachers and peers is sometimes compromised as a result of heavy technological incorporation at STA.

“The only downfall I see [of using technology] is that [students are] losing some of the skills of the face to face conversation and how to communicate,” Blake said.

Senior Grace Girardeau agrees that technology causes distractions and also believes that the use of technology in the classroom could threaten a student’s comfortable learning habits.

“As long as the technology isn’t forcing students to do anything in a way they do not prefer, then it is a valuable part of the classroom,” Girardeau said. “Once it starts affecting how they do their work or studying and they feel they have to do things a certain way, then it’s not worth it.”

Blake was one of the first teachers to incorporate a “flipped classroom” at STA. According to Blake, the use of technology in the classroom prepares students not only for college, but also for a career because the widespread use of technology is “not going away.”

“[Technology as a learning tool] is basic college prep,” Blake said. “We’ve got to expose [students] to as many technology tools and opportunities so they feel comfortable and well-prepared.”

Blake does believe, however, that not every assignment lends itself to be electronic and that relying on technology should also bring flexibility from teachers.

According to senior Tricia Melland, flipped classrooms allowed her to make up most of her work missed in her biology and social concerns classes. Melland battles Mitochondrial Disease and has missed months of school on end due to treatment and rehabilitation. Melland believes that the use of her netbook and being able to communicate through Moodle has aided in the furthering of her education despite her absences.

“If STA wasn’t so technologically advanced there is no way I would be graduating with my class this year,” Melland said. “I would have been homeschooled until I was 16 and then taken my GED, just like all my other friends who have [mitochondrial disease].”

Principal of academic affairs Barbara McCormick thinks that because STA is part of a global chain, students should be prepared for their futures in the best way possible.

“If we look at the research and we look at society as a whole, globally, we’re linked,” McCormick said in an interview for an earlier Dart story about STA’s STEM initiatives. “We’re using technical tools to be not only consumers of information and skills and concepts, but producers. It’s important that we become knowledgeable and willing to adapt and utilize knowledge and skills in tandem with one another so that we can be a candidate for the business world in the future.”

According to Tonnies, the science department should always be innovating with technology, because “that discipline is becoming a tech-driven discipline.” Tonnies believes, however, this is not as imperative in the English department because for a student to be a “prominent thinker they aren’t going to have to know innovative technologies in order to be successful.”

“One of the great things about [STA] is that teachers have the freedom to develop the education in each classroom in unique ways; you can’t draw the line without infringing on some of that freedom,” Tonnies said. “[As a result] it’s what makes our classes here so good.”

However, Tonnies thinks that this freedom for teachers needs to be carefully used, considering that he sees benefits in both kinds of learning: technological or not.

Both Tonnies and Blake agree that technology affects STA outside of the classroom by causing students to lose some of the skills involved in face to face conversation and communication skills.

Tonnies also believes that as STA moves forward, our community should continue to ask ourselves one question: Why do we all physically come to STA every day?

“If we aren’t utilizing the fact that we are physically present [at STA], then we may have forgotten what’s beneficial about all of us being here,” Tonnies said. “There’s incredible value to all of us being here, and I hope that as more and more of our education at St. Teresa’s becomes digital, we continue to respect and acknowledge the value of being here.”

Blake agrees, as she sees in-class time as an opportunity for deeper learning and interactions between students and a teacher.