“‘The French Dispatch” Belongs in An Art Gallery

Wes Anderson takes viewers on a trip to France in his newest film, "The French Dispatch." 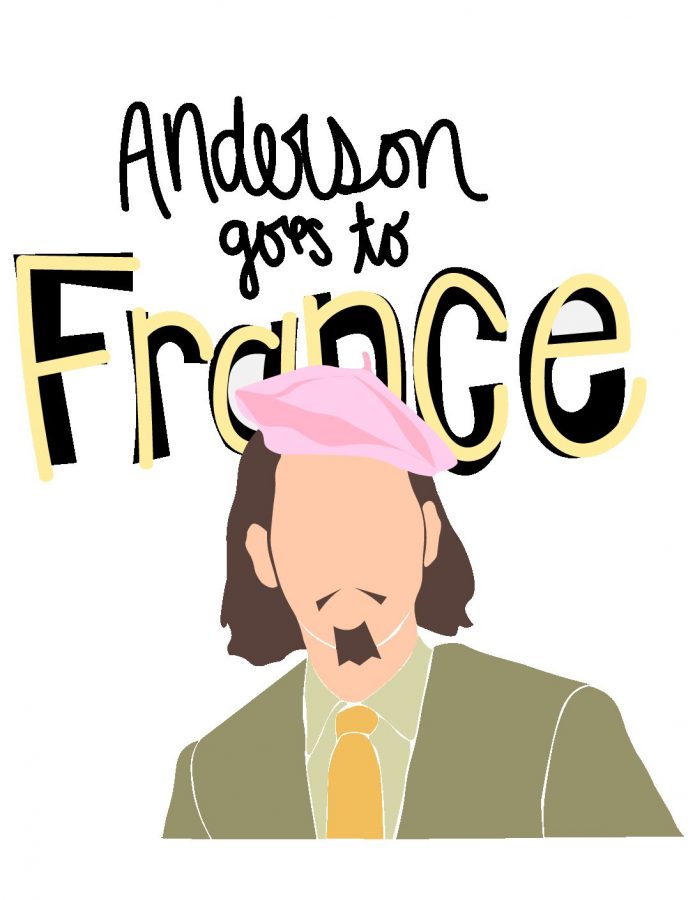 When does an artist’s style become last year’s Prada shoes? When the once-groundbreaking techniques are no longer awe-inspiring and the ending product is no longer profound. Wes Anderson has a distinctive style—or more appropriately—aesthetic. Each of his films contains an array of pastel color pallets, awkward yet captivating scene cuts and either Bill Murray or Owen Wilson.

“The French Dispatch” does not stray away from Anderson’s typical characteristic; in fact, the film stars both Murray and Wilson along with an ensemble of big-name actors (many claiming a slender six minutes of screen time). Why do so many of these Hollywood starlets give up billions for a couple of minutes of Wes Anderson’s fame? The answer: his style is timeless.

I’ll offer up a metaphor: 13 Jackson Pollack paintings are hung up on the wall. Each of them is identical except for a few slight color changes. I guarantee buyers would still spend millions of dollars on any of those paintings simply because of their creator. The same is true for a Wes Anderson movie—its box office results are going to be astronomical despite its Rotten Tomatoes score. It doesn’t matter that each of his films fits into a pastel pink equation; the set and props alone could be considered art. Every shot is picturesque, deserving of its own Nelson exhibit. “The French Dispatch” does not disappoint.

One of the easiest ways to grab an audience’s attention is through a strong central protagonist whose personal narration of the sequence of events evokes empathy. Consequently, switching perspectives through a multi-narrative storyline often ends up disjointed. The most impressive aspect of Anderson’s most recent film is the way it couples four subplots together to create one cohesive tale about the on-goings of French Society. The key to this type of story-telling is having a central plot element that ties the characters together. “The French Dispatch,” a New Yorker-Esque magazine published from the cornfields of the Midwest, is the glue of the film.

Each of the four storylines represents a different article written within a different section of the final printed issue of the magazine. Owen Wilson offers up a zany day in the life-type monologue that transports the viewer to a charming small town in France, Tilda Swinton tells the love story of an incarcerated painter and his prison-guard muse, Frances McDormand gets herself involved with an Einstein-looking Timothee Chalamet heading a youth revolution and Jeffery Wright takes us on a tasty car chase with a renowned chef and police commissioner.

The comedic timing of its actors as well as the well-delivered satirical elements are what led me to walk out of Ward Parkway theater in a fit of passion. I was inspired to create my own work of art. Inspired to start my own revolution. That is why I believe Wes Anderson is timeless; and therefore, “The French Dispatch” is deserving of your time. Anderson creates what he loves—his films are not simply a cash cow ploy to make money—they’re a method of expression. Is Wes Anderson going out of style? Are his films predictable? Full of the same color schemes? It would be a lie to deny it, but that is the key to his success. He is among the Tim Burtons and Dr. Suesses of the creative world: if anyone creates something remotely reminiscent of his work you can’t help but think “That’s Wes Anderson.”