The technology desk is flooded with people needing to get issues fixed. From laptops not turning on to pen tips needing replacing, the tech desk has all of it covered. 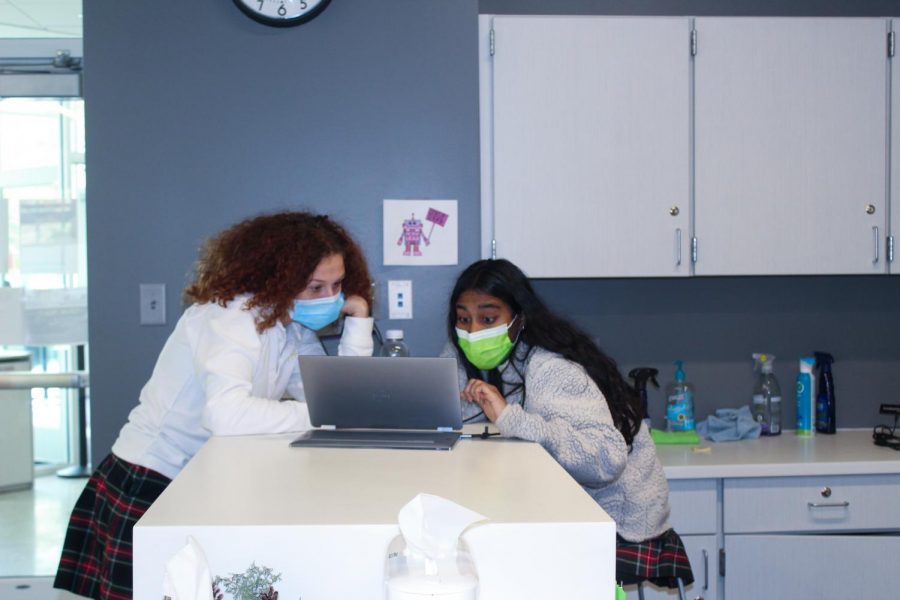 Senior Archana Smerdon helps fellow senior Grace Quinn from the other side of the help desk Oct 7. Students can volunteer their time to become a help desk worker. photo by Ellie Buttell

When Network and Systems Administrator Jeff Zimmerman, affectionately called JZ by students and staff, walks through the door on any given weekday morning, he has an hour tops to ready himself for the day before walking out of his office to a congregation of students and faculty awaiting quick technology guidance, fixes and replacements. Soon, Information Technology Coach Sage Garretson and IT Director Matt Stewart join Zimmerman to complete the trio that keeps STA running during the day-to-day.

According to Zimmerman, mornings are usually his busiest time of the week because it’s one of the most convenient times for people to get any bugs squared away before the day officially begins.

“As the day gets started, everyone gets busy and there always seems to be a lot going on after school,” Zimmerman said. “This is also when everyone typically discovers if they have forgotten something they need throughout the day.”

Garretson makes a similar observation. He believes that Monday mornings and the days after a break or the weekend are the busiest times for the Help Desk.

“When there’s a lot of time away from campus, technology is bound to break,” Garretson said.

Along with the chaos of the mornings, the rest of the day brings along challenges for Zimmerman and Garretson. At least one of them can usually be found walking a student through a computer issue or mentoring whatever student is working the Help Desk during that period.

“It is incredibly unacceptable if students can’t use their devices and I’m unable to resolve it within a few minutes…I get very frustrated with myself,” Zimmerman said.

Alongside helping STA conduct its day-to-day activities, both Zimmerman and Garretson teach classes: Computer Diagnostics and Troubleshooting, and Broadcasting and Production respectively.

According to Zimmerman, one of his biggest personal successes at STA occurred “the day I walked into a classroom as a teacher for the first time.  For many reasons, that was a large step for me.  While I still have anxiety, it does get less and less every week,” Zimmerman said.

Garretson shared a similar sentiment about his new class this year. He stated that seeing students take pride in their work and creating their own ideas is more than rewarding for him.

“I enjoy helping to empower the students to take the lead and help their peers and their teachers,” Garretson said. “Knowing how to fix technological issues is just as important as knowing how to use it. Seeing young people work together on a common goal, such as TBC, is truly encouraging.”