St. Teresa’s students discover the perks and benefits of working with fellow classmates. 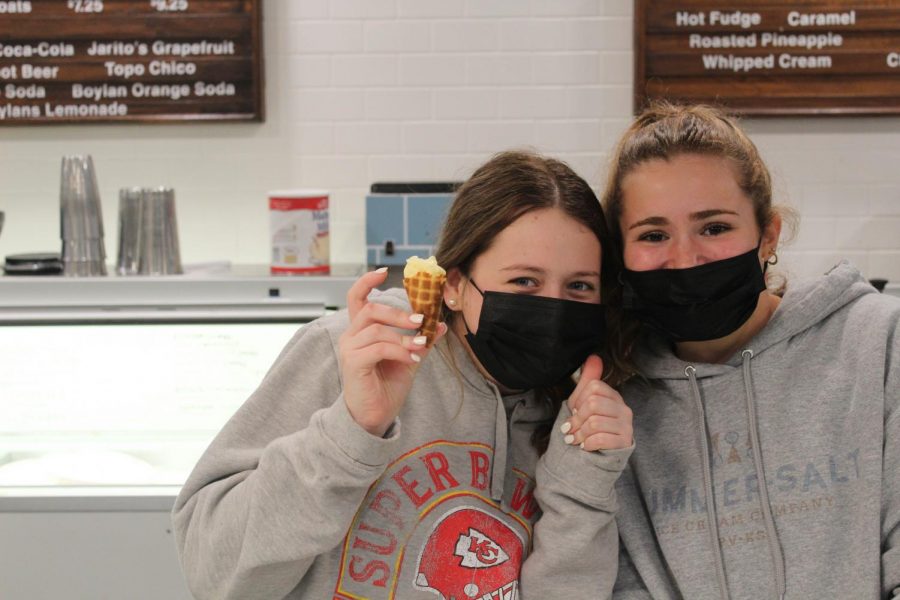 Sophomore Payton Cherra and senior CC McCullough are a part of the "Scoop Troop," a name dubbed by their boss Oct. 8. They have worked together at Summersalt Ice Cream Co. for several months.

Despite working long hours this summer, sophomore Nora Turner would describe her job as anything but boring. The first thing that comes to mind when she thinks about her job is all of the new friends that she has made while working, many of those friends being STA students.

According to Wavelength, working with friends boosts employee satisfaction by 50% and makes employees seven times more likely to engage fully in their job. Turner, along with other STA students, believes that she has benefited greatly from working with her peers.

Turner decided to get a job at Woodside Country Club this summer with one of her friends, not expecting to get much out of the experience other than some extra spending money.

“I got to meet new friends and meet a lot of different people that I didn’t think I would be friends with,” Turner said.

Similar to Turner, sophomore Samantha Sullivan, an employee at Summer Salt Ice Cream, has made many new friends from STA at her job. Sullivan works with four other STA students, and she met all but one of them at work.

“I really love the people that I work with,” Sullivan said.

Curry also believes that working with so many STA students has affected her work experience in a positive way.

“I feel like it has kind of made it easier because we can relate that we go to the same school,” Curry said. “It was easier for us to bond and find things that we had in common.”

Sullivan agrees that going to the same school as her co-workers allowed her to form closer bonds with them.

“It’s made it fun to be able to share the experience of going to STA,” Sullivan said. “We can talk about things that happen during the school day, or teachers that we have, or assemblies that we go to, stuff like that.”

Turner shared similar thoughts, saying that working with so many STA students has made her feel more included.

“I really feel more part of the community,” Turner said.

The bond that these students have created with their friends from work is not limited to while they are working. Curry shared that she talks to her work friends, even the underclassmen, when she sees them at school.

Turner also enjoys talking to her work friends at school, although she is sometimes still a little nervous to talk to them.

“I say hi every once in a while, not always, when I see them in the halls,” Turner said.

Sullivan feels similarly about interacting with the upperclassmen that she knows, but she doesn’t feel as intimidated by them at school anymore because she has become so close with them.

“I’m more outgoing at school because of the upperclassmen I work with,” Sullivan said. “It has made it fun, because I get to talk to them in the hallways.”

Neither Turner nor Sullivan nor Curry had any negative feelings about working with their classmates. All three agreed that working with STA students has made their work experience much more enjoyable.

“I think working with people from STA has made me feel more welcomed and connected where I work,” Turner said. “It has overall been a very positive thing.”