As the world reenters normalcy, the question of concerts coming back takes the stage. Singers around the globe are selling out theaters and arenas, trying to keep up with the growing demand for live performances. 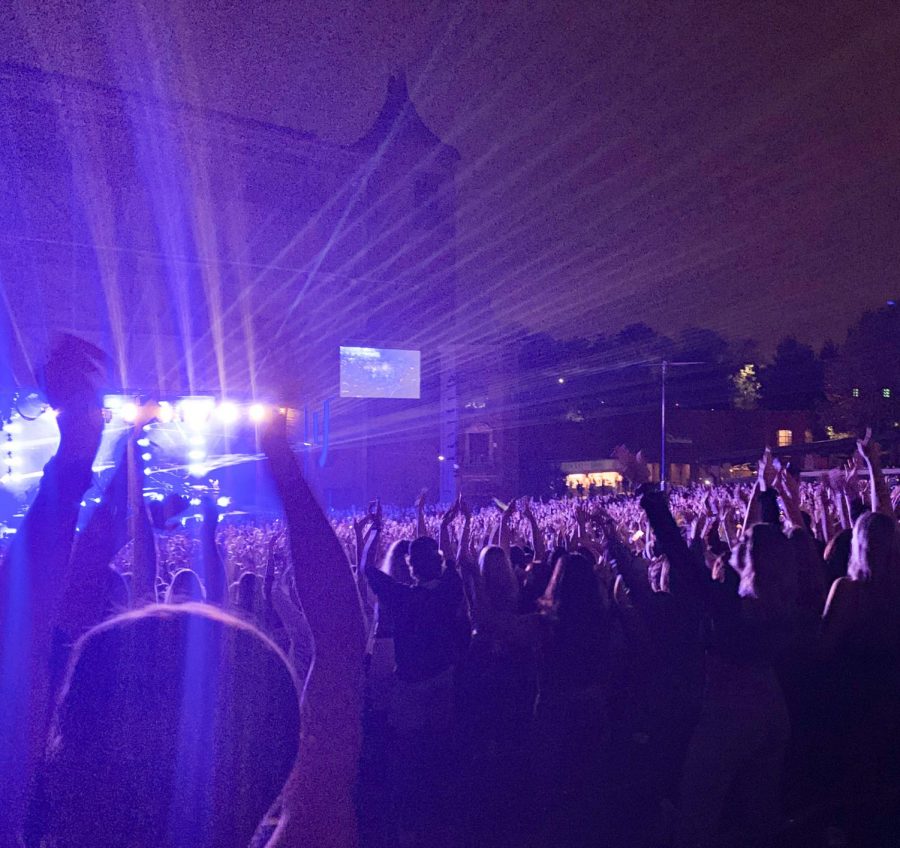 Thousands of people in the crowd put their hands up after being prompted to by Pitbull Oct. 6. Pitbull performed at Starlight Theater, an outdoor concert venue. photo by Lily Sage

Since March 2020, thousands of events have been canceled or rescheduled due to COVID-19: the Olympics, the Met Gala and different festivals and parades all over the globe. But to the large demographic of teenage citizens in the world, one type of event has been missed the most — concerts.

Millions of teenagers had bought, or were planning to buy tickets for concerts in 2020, and had to face a harsh reality of their favorite artists canceling or postponing their tours.
Sophomore Piper Chaney had plans to go to the Harry Styles concert last year, and remembers when he announced the delay of his tour.

“When I thought he was going to cancel the whole thing, I was so sad, you know?” Chaney said. “But then, when it was just rescheduled, I got super excited because it honestly just meant more time to plan and get more hype for it.”

The hype-up teenagers give to concerts can be attributed to not only the event itself, but the sequence of events that lead up to it. The rush of excitement when buying tickets, the build of anticipation as the day arrives and finally, getting ready to leave for the big night are all part of the fun.

For concert-goers who bought tickets for a 2020 tour however, the buildup was longer than they had anticipated. According to students, one of the most poignant losses to teenagers was the postponement of Harry Styles’ “Love on Tour.” Scheduled to begin shortly after the release of his album, “Fine Line,” in April 2020, it soon became apparent that the tour wouldn’t be happening in the near future.

Sophomore Claire Lystad attended the Harry Styles concert in September, but remembers her feelings upon receiving news that it may be canceled.
“Concerts are always thrilling to attend with your friends,” Lystad said. “But I have been a Harry stan since July 23, 2010, when it all began with One Direction, so I was pretty devastated when I thought I wouldn’t be able to go.”

However, the rescheduled U.S. tour has been as much of a success as it had originally been anticipated. Although other countries lost their chance to see the English performer, the additional waiting just built up the anticipation for American fans.

Lystad described the concert as a “rebirth” experience she will never forget.

“It was just surreal, like, definitely one of the highlights of my life. I just love Harry and being there was amazing.”

Well-known artists aren’t the only ones who’ve had to change plans. Lystad’s cousin, Carson Lystad, is a member of Arlie, an indie-rock band based in Nashville. They were originally set to open for Dayglow during his tour this year, but they had to cancel due to the outbreak of COVID variants. Claire Lystad, however, will still be attending the Dayglow performance at the Truman this Saturday.

It’s disappointing [Arlie] won’t be there, but my friends and I are still huge fans of Dayglow, so I’m really excited to see him,” Lystad said.

Yet another artist has visited Missouri this month, known as Mr. Worldwide. Pitbull had a show at Starlight Oct. 6 with Iggy as his opener, and STA students did not miss out on it.
Chaney attended the concert with her friends, and said having the concert closer to home than the Harry Styles performance made it even more exciting than she expected.

“Even though I love concerts in general, my favorite part of the whole night was at the end, when all the STA sophomores were together and Pitbull was playing his most mainstream music,” Chaney said.

Sophomore Francie McCray also attended the concert and said it reminded her of how fundamental concerts are for teenagers.

“I think concerts are a great way to bring people together,” McCray said. “When it happens that [people] all have this one love for one certain person, It just really bonds people to a spiritual level that I just love.”