As the STA community mourns the loss of Liesel Anderson (class of 2024), her best friend, Anne Rinella, remembers the way she carried herself with confidence and her ability to make anyone feel loved. 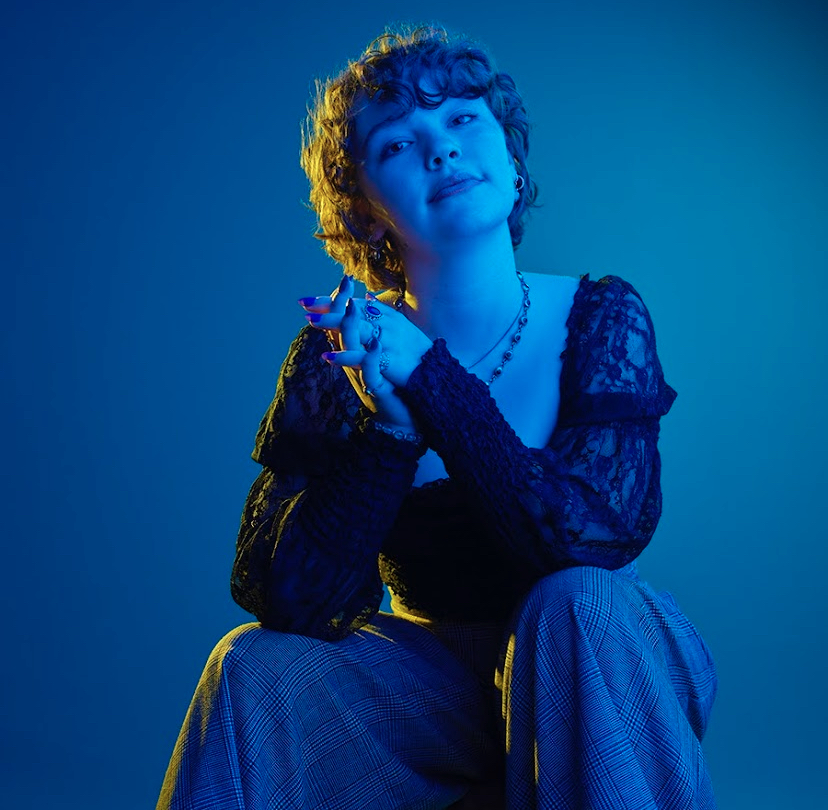 Anderson sits on a stool, posing under a blue light Dec. 19. Anderson and her cousin Evie Kay had a professional photoshoot together. photo courtesy of Evie Kay

“I don’t think Liesel’s memory will ever die,” Sophomore Anne Rinella said. “I think that her spirit lives on in all of her friends, in every person she met, all of her family members. I don’t think anyone will ever stop talking about her, sharing jokes that she made or funny memories. She touched so many people that she will never be forgotten. People are going to continue to be inspired by her forever.”

Liesel Anderson was an STA student who passed away over the summer after battling cancer. She leaves behind a legacy of love, acceptance and creativity.

Rinella, her best friend, said that even at the beginning of her freshman year Anderson didn’t act scared – she made everyone else feel welcomed. She made STA a place of comfort and acceptance.

Anderson loved STA. She was bound for Bishop Miege, but ended up here after sitting down and giving her parents every reason she wanted to come.

“[She] just [felt] like she could be herself,” Rinella said. “And obviously female empowerment was a big part. And the cat.”

Being authentic was Anderson’s signature. She was known for it and it has stuck with people.

Anderson was very expressive through art as well as her fashion. Her closet doors were always decorated in her style. Rinella described everything she did as a scavenger hunt – you have to look at it intently to find everything she used and created.

“She decked out frames with beads and glitter and stuff,” Rinella said. “Everything she owned, even her LED light [remote] was just decked out in ‘Liesel style.’ She spray painted her Air Force 1’s with green spray paint, she strung beads through the laces.”

Anderson’s friends are inspired not only by her style, but by her willingness to be herself.

Friendship was the most important thing in Anderson’s life. She absolutely loved loving. Fostering an environment full of love for everyone – especially her friends.

“Liesel just had a way about her,” Rinella said. “She had a way of making people feel seen. Not a day went by that Liesel didn’t tell me she loved me or express her gratitude for our friendship. She constantly made me feel appreciated, valued and loved. We can all learn from her beautiful thoughtfulness and willingness to give love to everyone she encountered.”

“[It was] like she was part of me already when we met,” Rinella said. “We just completed each other and I learned so much through our friendship. I think we were just super drawn to each other. I think Liesel was drawn to me because she has a very strong intuition, but I think she knew that she could tell me anything and I would listen to her. I was there for her through her treatments and she was there for me through everything. It’s just that when you have a shortened time with someone, you just feel like you need to be authentic 100 percent of the time.”

“Liesel had every single right to curl up in a ball and be mad at the world,” Rinella said. “She got dealt the worst hand. But she did not do that. She cried about it and then decided, ‘I’m going to live my life to the fullest and be with the people I want to be with.’ That’s super inspiring; everyone should live their lives to the fullest.”

At Liesel’s memorial service, green bracelets were handed out. They were designed by her cousins and everything on these bracelets is intentional and meaningful. Green was Anderson’s favorite color, while the text was purple — her second favorite. The text reads “Liesel” on one side and “I love you to the moon and back” on the other. The latter is what Anderson and her mother used to say to each other. The flowers on either side of her name are Edelweiss flowers. Anderson was named after “The Sound of Music” so the “Edelweiss” song had a special place in her life.

The bracelets can be seen all over: in many schools, grades and neighborhoods. They are physical markers of Anderson’s reach and of all of the people that will be continuing her legacy. Her power to befriend, love and inspire everyone around her is unmatched. Her bright, shining personality is missed. The STA community strives to remember and honor her everyday, and Rinella knows how.

“Be yourself.” Rinella says. “Own who you are and be kind. Don’t be afraid to reach out to people. Love your friends. Live boldly, whatever that means for you.”