With the start of a new school year, many STA students are facing the difficult task of keeping up with their ever- changing schedules. The solution many students have turned to to keep focused is caffeine in the form of coffee and energy drinks, but are these beverages actually keeping them awake? 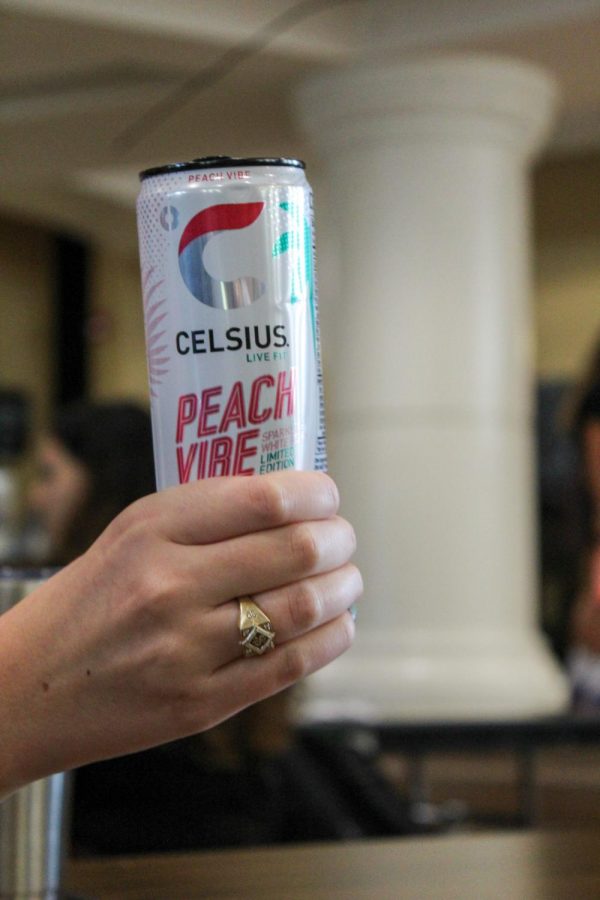 Senior Nina Burke holds a Celsius Sept. 7. This drink, though very popular, is controversial due to the abundance of unknown ingredients. photo by Katie Massman

Sophomore Gabi Vovk has a hard time concentrating in her second-period English class. Her hands are shaky, and her mind is spinning. If Vovk’s brain is a house, someone is pounding on the front door. After a few attempts at participating in her class discussion about Exit West, she realizes what has been fogging up her thoughts — her morning cup of coffee.

According to Medical News Today, adolescents are the fastest-growing population of caffeine users. The average teen drinks up to 400 milligrams a day, which equates to approximately four times the recommended daily amount. Biology teacher Renee Blake took up drinking Bang last year in response to her packed schedule filled with late nights.

“I’ve made the mistake of having coffee in the morning and a Bang in the evening,” Blake said. “I was still tired in the afternoon and had forgotten I drank coffee. I started having jitters once I felt it kicking in. I had to stop and ask myself, ‘What did I just do?’ I did not feel well. It made me dizzy and it was all just way too much.”

The disturbing effects of being over-caffeinated led Blake to pick up on the excessive amount of caffeine she sees around STA. She began to question how it affects the development of the teenage brain.

“It’s a stimulant,” Blake said. “It’s releasing hormones that give pleasure, and so when you come off of that caffeine, you have this roller coaster of moods. All of that on top of the crazy hormones teens already go through is a lot. I’ve had experiences where I drink a Bang in the morning to get me going, and then I take one pre-workout later in the day, and I can’t get to sleep. It causes insomnia. If teens aren’t getting the rest they need, their brain cannot make those connections to process during deep sleep. It definitely has a negative effect.”

Senior Caroline Brinks doesn’t consider herself an avid coffee drinker but typically enjoys a daily cup in the morning. Brinks can attest to insomnia caused by caffeine and has resorted to cutting out caffeine in the afternoons after seeing a spike in her anxiety levels.

“I start getting this anxiety in my stomach,” Brinks said. “My sleep suffers a lot [due to too much caffeine]. I worry about my peers falling into a cycle of being tired, drinking lots of caffeine, then not being able to fall asleep. I feel like it’s just so normalized to use caffeine.”

The normalization of drinking caffeine to stay awake or focused is one of Vovk’s greatest concerns with teenage over-caffeination. Vovk didn’t get into drinking coffee until she was hit with the pumpkin spice craze, which is why she believes the “trendiness” of drinking coffee is worrisome.

“It’s a very double-edged sword,” Vovk said. “ I feel like [coffee] has become too much of a normal thing. It’s become a little too popularized. Before social media and everything, coffee was the ‘working man’s drink.’ When it becomes popular and cute to drink something, that’s when it becomes dangerous. Celsius was never heard of before, and with our generation and trends and how quickly they come and go, it can get really dangerous.”

Vovk enjoys the taste of coffee but doesn’t always respond well to the levels of caffeine in the drink. Her primary supply of caffeine comes from Diet Coke because she believes it has a more mild effect on her body.

“I get headaches sometimes and I’ll feel tired [after drinking coffee],” Vovk said. “I won’t feel ‘sleepy tired’—I’ll feel exhausted in the sense that ‘I can’t do this right now,’ I can’t think about it, I can’t even try to think about the periodic elements right now. It’s not terrible, but it’s not ideal. Caffeine is just everywhere. It’s not just in these amped-up energy drinks or coffee, but you find a surprising amount of it in things like Sunkist and chocolate. My mom doesn’t eat chocolate anymore because it gives her migraines, which is something I’m definitely afraid of with caffeine.”

Senior cross country runner Lilly Hupke has a different take on the recent caffeine craze. Hupke has experienced the rigor of school combined with the stress of practices and believes energy drinks such as Celsius help get her through the day.

“When our cross country practice time got switched to the morning, I started [drinking Celsius] after cross country every day,” Hupke said. “I don’t have it before I run, but my teammates do. They think it has a positive effect, making them be able to go farther without getting as tired. I only drink energy drinks after morning practices. I’m usually pretty dead by first period, so I’ll drink a Celsius to help me focus and pay more attention in class.”

According to Vovks, calling caffeine ‘bad’ is a complex statement. In Hupke’s case, a can of Celsius has a positive effect on her performance in class — helping her concentrate and stay awake after a tiring morning of practice — while Brinks believes too much coffee leads her to become anxious or jittery. The bottom line? It comes down to moderation.

“It’s such a complex case, it’s hard to make just one statement,” Vovk said. “You can’t just say ‘caffeine is bad’ because things like black coffee have all these antioxidants and there are all these healthy alternative kinds of milk you can put in it. It’s very back and forth.”