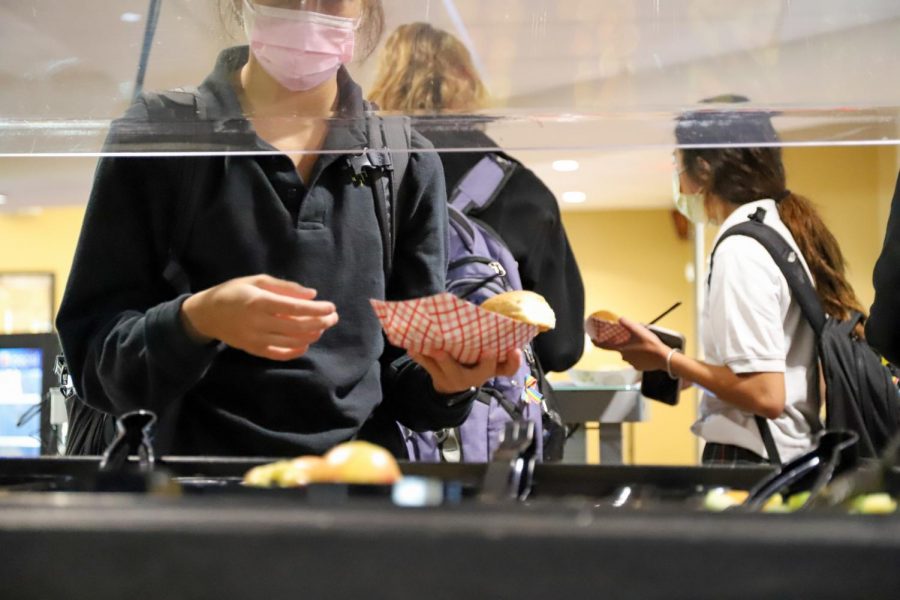 Juniors grab their lunch from the self-serve cafeteria setup. The new lunch program debuts a variety of grab and go items. photo by Charlotte Malone

When freshman Megan Adriano received her first-semester schedule in August, she thought administration was pulling her leg — lunch couldn’t be her third period. With her days jam-packed with classes and cross country, she imagined lunch to be a calming break in the middle of her day — a break that would consist of talking with her friends and catching up on homework. Instead it seemed that this break would be overtaken by the stress of trying to wake up. However, almost a month into the school year, Adriano has found ways to adjust to the new schedule. From bringing snacks to not eating breakfast, Adriano has adapted to having lunch at 10:05 a.m.  every day, or at least has learned to deal with it.

When Adriano first heard about the new lunch time, she was immediately upset with the early lunch period and worried it would disrupt her daily schedule. Adriano was unconvinced this earlier lunch would provide her with the nutrition and energy she needed to get her through her day.

“Initially, I was kind of annoyed because I run cross country so I thought ‘well I’m going to be starving at practice,’ and I just didn’t like the idea of having a 10 a.m. lunch,” Adriano said.

As the school year began, Adriano immediately noticed some changes to her day as a result of the early lunch time.

“I noticed that my day feels really long and that I feel tired after lunch. That just makes it feel like I have so much longer to go,” Adriano said. “I for sure feel exhausted in my first class after lunch because I have math, so it’s like ‘I’m always so tired I can’t do this.’”

However, Adriano was not alone in noticing the effects the early lunch had on her. When Freshman Lucy Filing heard about the new lunch time, she was filled with surprise and observed the influence the earlier lunch had on her school day and athletics.

“I get super hungry and I don’t have enough energy by the end of the day, which is kind of why the volleyball team started to bring in our own snacks,” Filing said. “We got protein bars and that really helped. But before we [started bringing in snacks] I for sure felt like I did not have enough energy to make it through practice.”

No matter how many adjustments these freshmen make, it is still apparent that snacks and a smaller breakfast can’t solve everything.

“When you’re hungry, it’s kind of hard to focus. And so that’s been a little bit of a disadvantage,” Filing says. “I get really hungry during seventh period but I still have two more classes to get through.”

When formulating the new schedule containing four different lunch periods, principal for student affairs Elizabeth Baker knew that although the schedule had lots of benefits, it also had necessary compromises.

Baker acknowledged that last year COVID-19 imposed a huge strain on the routine of STA. Considering the lasting effects COVID-19 still has on the school day and the need to return to something resembling normalcy, Baker found the new schedule to strike a perfect balance.

“We knew that we wanted to try to do a little bit of mitigation in the cafeteria because we knew that masks were going to be down.” Baker said. “Really the only solution for that was to have one class at a time. So we knew we’d have to have four lunch shifts.”

After finding a schedule that combines both the needs for normalcy and safety, Baker found the next issue needed to be addressed was which grade ate when.

“I know from elementary schools that elementary students start their lunches very early,” Baker said. “So who’s the first one coming from an elementary school: freshmen. It made a lot of sense. I also did consult the senior class leaders about which shift they would want to have first. And they all concurred that the last shift would be the best shift because then they only have three classes afterwards.”

After settling on the decision of freshman eating first at 10:05 a.m., Baker knew that there would be some shocked reactions. She also acknowledged that there were a variety of solutions to help solve the main problem of freshmen being hungry throughout the day.

“We came up with the regular schedule lunch shift, knowing that lunches are early for freshmen and late for seniors,” Baker said. “So, the compromises are there. We also knew we had vending machines and grab and go if somebody was desperate.”

“I’ve adapted pretty quickly, and it’s not as bad as it seems,” Adriano said. “I think it actually helps a little bit just because if I eat something that might have upset my stomach, it’ll have time to settle before cross country.”

No matter how early the shift is, Adriano has found lunch to still be a calm place to catch up on homework, talk to her friends, or simply just relax.

“Lunch is a great break for me,” Adriano said. “It’s fun for me to get to talk to my friends because, yeah, a lot of my friends that I sit with I don’t have classes with. So lunch is a time for us, where we can just hang out and have fun.”