The Twinks mascot has been influencing STA's spirit since 1995 when it was first introduced. Since then, it has made it's mark on STA and is welcomed by all students and crowd members to any sports game. 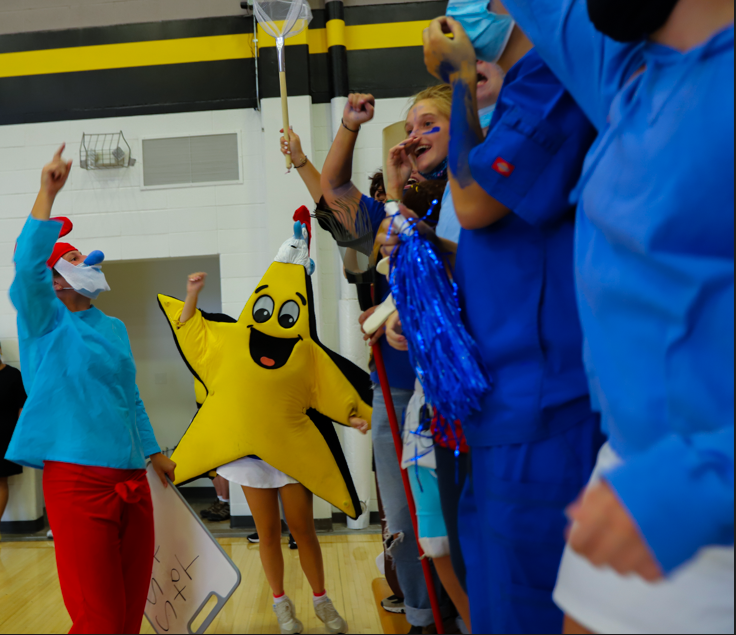 The goofy smile of the Twinks mascot can be seen at any big school or sporting event for St. Teresa’s. Students and alumni of STA know and love their mascot, Twinks. Before the beloved Twinks mascot came to life, each grade had a seperate animal as their grade specific mascot. Class of 1989 graduate Megan Schaefer experienced these specific grade mascots.

“Every grade had an individual mascot that they would use for school spirit,” Schaefer said.

Schaefer has been working at STA since 1994 and is currently the director of marketing and development. She’s also been an advisor and art teacher. Schaefer doesn’t recall having the individual mascot Twinks in her years at St. Teresa’s.

“It [the individual mascots] was a much bigger deal in the 70s and 80s,” Schaefer said.

“They had a lot of competitions and a lot of pride around their mascot for their particular class.”

In 1995 the Twinks mascot was introduced at a school assembly. From then on, Twinks has represented St. Teresa’s Academy for decades.

After Twinks was introduced, the STA community embraced the star and incorporated it into sports games and other school events. Students involved with spirit clubs have the opportunity to perform as the mascot. Junior Maggie Reinjes has been the Twinks mascot on two different occasions.

“I have been it during the STA club fair to encourage students to come to spirit club and also at the first volleyball game against Aquinas.” Reintjes said.

She recalls her experience inside the mascot being exciting, however it had some downsides.

“It started to get hot within about 4 minutes,” Reinjtes said

“I think I made the mistake of talking and yelling too much.”

Even with the heat, Reinjtes enjoyed her time as the mascot, and emphasized its impact on students throughout the games.

“You can see the huge smile on the twink mascot and when people see that they want to bring total energy,” Reinjes said

“When you see other people with a lot of energy then you feed off of it. It brings spirit to students who aren’t feeling necessarily spirited about the school.”

Schafer believes Twinks differentiates from other school mascots due its “goofy” persona.

“I think they [STA girls] like to have fun and be super goofy,” Scafer said

“They aren’t scared to make a fool of themselves or have fun. They love being total goofballs and wearing a costume.”

In order to become the mascot, spirit club president senior Grace Coppinger has said in the past they have done tryouts or volunteered to be Twinks.

“Usually later in the year we’ll have juniors or sophomores audition during a teams meeting,” Coppinger said

“It’s just fun to see who really wants to do it.”

Coppinger believes the STA community has a unique relationship to its mascot, compared to other schools.

“People here are more connected to our mascot,” Coppinger said

According to Reintjes, Twinks is a huge motivator for the crowd.

“When I walked into the volleyball game and I started jumping up and down‒the crowd took that as a sign to start cheering,” Reinjtes said.

Twinks has had a huge effect on St. Teresa’s since it came to be around twenty six years ago. Its impact has not only been left on the school itself, but the girls who have attended STA.

“It encourages girls to be confident, not being so concerned with what people think about them or making a fool of themselves,” Schaefer said

“I think it encourages empowerment in a way.”