STA’s uniform policy includes a dress code for athletes requiring midriffs be fully covered by a tank top or shirt. However, the August heat waves have caused runners to question the protocol. 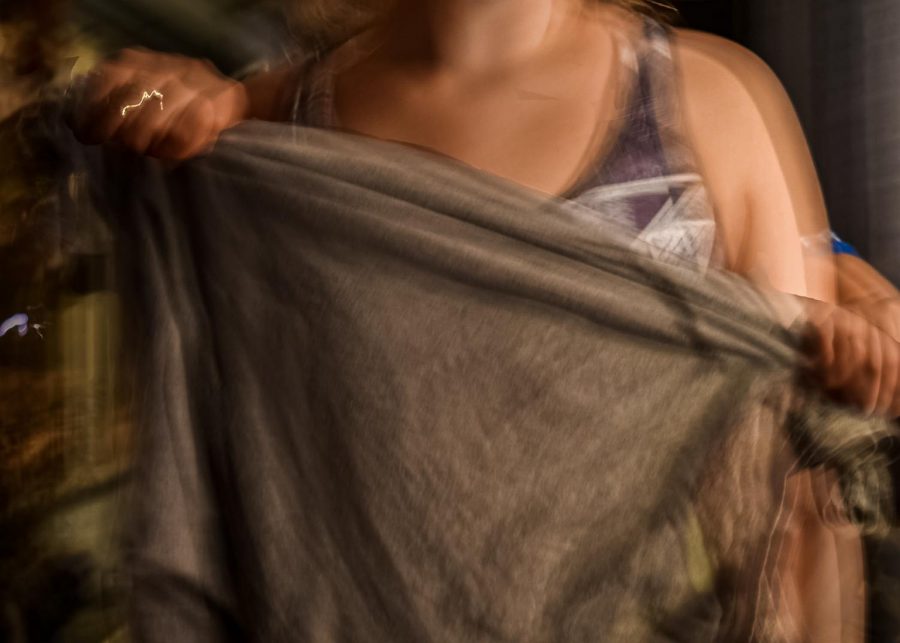 STA's cross country team has been restricted due to a clothing policy Sept. 5. This policy was implemented to protect students, but prevents members of the team from running in their sports bras. photo illustration by Becca Speier

The dog days of summer are finally over, and for STA cross country runners in particular, that comes as a big relief. As temperatures reached and exceeded 100 degrees in mid-August, practices were moved to the morning, but athletes still couldn’t outrun the stifling heat. Runners might have been tempted to take off their shirts and run in their sports bras; however, STA dress code and modesty policies prohibit such behavior.

Senior and Captain Sydney Swan particularly viewed the policy as a safety hazard in that instance.

“I think it’s unsafe, especially with the heat that we run in right now,” Swan said. “Taking your shirt off allows you to cool off so much better.”

With the heat, Senior and Captain Claire Fanning had to be especially mindful of clothing choices.

“It seems like I have to put more thought into what I have to wear because I can’t take my shirt off,” Fanning said. “So, I have to prepare for the heat more.”

However, Athletic Director Tyler Abney considers the policy an extension of classroom rules.

“For as long as I’ve been at STA, and am assuming before I came on board, there has been a school uniform policy,” Abney said. “As athletics are an extension of the classroom, the athletic department and teams must also abide by the policies put in place by school administration. Nevertheless, the rule applies to all athletic teams within the department, not specifically the cross country and track and field student-athletes.”

The rule itself states “At St. Teresa’s Academy, our dress code is reflective of Catholic values. One of our core values is the belief that true growth comes from care of the whole person in mind, heart, body and spirit. During the school day our young women wear uniforms to keep the focus of their minds on learning and to create unity with each other. After school, our athletes have diverse choices in their athletic apparel; however, these choices must be commensurate with and reflective of our school’s Catholic values. Therefore, at practices, athletic events, and school-sponsored trips, each student-athlete and manager should wear a t-shirt or tank top that covers the midriff area completely. Any student-athlete or manager in violation will be subject to student behavior referrals.”

The policy is stated within each team’s guidelines, which are distributed at the beginning of the season. However, Senior and Captain London Porter explained that the reasoning behind the policy is ambiguous to many runners.

“It wasn’t made clear to us if it’s because the coaches were uncomfortable or if it was about Catholic values, which I think they need to clarify,” Porter said. “If it was because of Catholic values, I just feel like that doesn’t really match up.”

Abney reiterated that the policy’s main purpose is to create a safe environment.

“It goes without saying we want our student-athletes, managers and coaches to have as safe environments as possible to practice and compete,” Abney said. “If the school dress code policy is aimed at protecting our students and/or providing safe environments, then our department is on board with that guidance.”