Sophomore Zoë Hoss fell in love with horses and horse showing has changed her life. 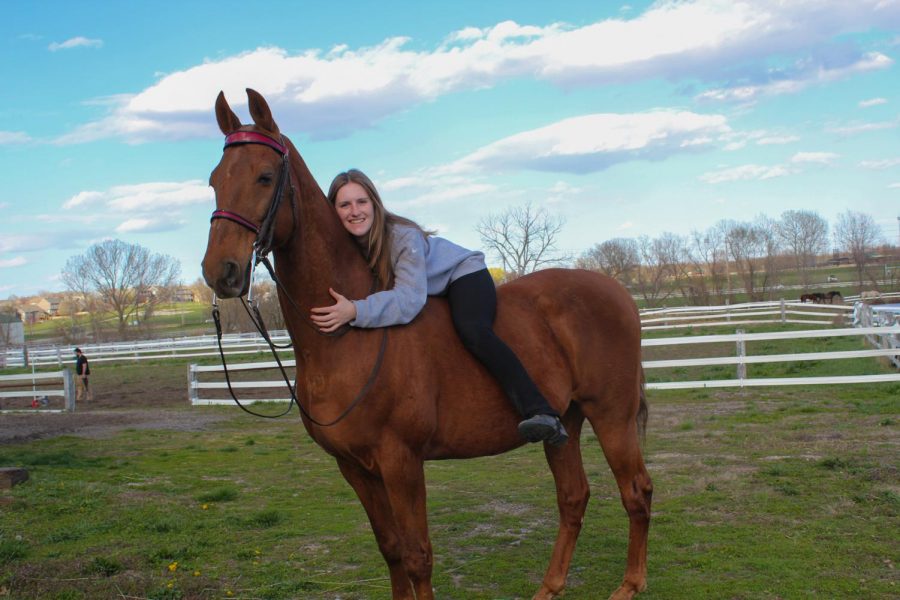 Sophomore Zoë Hoss with a horse she rides named Houdini March 31. Zoë has been horse showing since she was 10 years old. photo by Caroline Hinkebein

How did you first start horseback riding?

It was one year on Easter that I rode a pony for the first time, and I fell in love, and I wouldn’t get off. After that I’d been asking my mom to ride horses for years and years, and she finally bought me a Groupon to some crazy instructor who I rode with for about five years.

What kind of competitions do you do?

You’ve got two main categories, which is English and Western. Then inside of that, there’s many other sub categories or disciplines, and I ride saddle seat. Inside of saddle seat, you’ve got two different types of main show groups: Academy and regular performance classes. Academy is for the beginners or the people who can’t afford to go to performance classes. I ride Academy, because obviously I don’t have the money, but you do the same things, it’s just a cheaper and more accessible way of doing it. Cause when you show performance, you’ve got to buy a $1000 suit, you’ve got to buy the horse, which is several tens of thousands, then you’ve got to pay the show fees. It’s a whole lot. So it’s just cheaper to go to Academy.

Can you walk me through one of your performances?

At a horse show, I would show up around 7 o’clock because my instructor has already gotten the horses there and she does all the work for me so that I can stay clean and pretty. I’ll put my show clothes on, and I will go in the warm up ring and get on my horse and I’ll warm them up. Then you just wait for them to call your class. New people come in every single class and show in different disciplines.

I wait for my class number, and then I trot into the ring. You go to the right, that’s the first way. You trot a few laps until the judge in the middle says either walk your horses or reverse, whatever they feel like saying. You walk and then you wait for the next command, and they’ll tell you to most likely canter, if you’re in walk, trot, canter class, which is what I do. Then you canter and you do full laps. The judge sees what they need to see, and then they tell you to walk, and then most likely reverse, and you do everything the other way. Depending on what type of class you’re showing in dictates what you do.

How is the winner decided?

That also depends on the type of class you’re in. If you’re in an equitation class, they are judging how you look, your form, your position, are your heels down, are you sitting straight up, are you relaxed but still strong? How you look and how your horse looks, but more importantly on you. Then in horsemanship classes, it’s how you show your horse. How good your horse looks. Obviously don’t sit there and slouch, but it’s more focused on your horse and how well you can show them, getting them looking nice. There are a bunch of other classes, but I show equitation and horsemanship.

With horsemanship, if you’ve got a nicer horse, usually you’ll win, which kind of sucks because you’ve got people who bring in horses that have no business being in Academy. Cause Academy is for kind of your more old, rundown, lesson horses that people teach on. Not so much show horses that people spend a bunch of money on. So when you’ve got someone who brings in a show horse against all of these school horses — that’s like bringing a Ferrari next to someone’s Ford Fusion. It’s not even fair. Obviously the Ferrari’s going to win. We kind of get irritated when someone brings in a nice, show horse, because they’re most likely gonna win. But sometimes you can show better than someone who’s out mounted you. 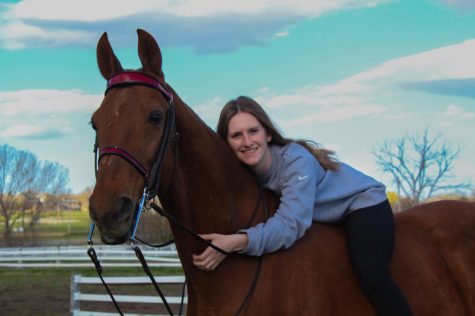 How have horse shows changed because of the pandemic?

In 2020 a lot of the horse shows just shut down. They didn’t happen, they got canceled. And that’s kinda normal. You know, a lot of the time with outdoor horse shows that don’t have covered rings, when it rains, when it’s too hot, when the ground’s too soft, we’ll have to cancel anyway because it’s not safe for us or our horses. So it’s normal to have a few shows that cancel, but in the pandemic, pretty much all of them canceled because we were still learning how to ride our horses. Cause we don’t ride with masks, but we’re so far apart that we’re safe to ride without masks, but once you get off your horse, you gotta immediately put your mask on. And we had to make sure that there weren’t a lot of people in the ring or in the stands. It just took a lot of figuring out to do.

But now in 2021 our season has started up again and we are taking all of the safety precautions we need to, but we are pretty much back to normal. All the shows have been rescheduled and they’re happening again, but just at limited capacity.

Do you think people perceive you as a “horse girl”? How do you feel about that stereotype?

In all honesty, it’s not so much riding. Don’t get me wrong, I love it. But it’s more just going out there and being at the barn and being around them and going into their stalls and brushing them and just taking care of them. That’s so much more significant, it means so much more to me than just getting out there and riding and getting off. It’s more so just bonding with them, and they’re like your best friends. I promise I’m not crazy or lonely, but you can tell them anything in the world and they won’t tell anybody, not like they can, but they’ll keep your secrets and they can feel your emotions and they’ll react to your emotions, and it’s just really cool. So if you need a best friend who won’t snitch on you, go talk to horses. 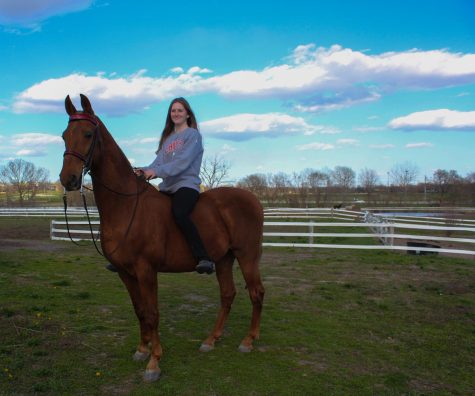 What is your relationship with the horses you ride?

I’d say it’s a pretty strong bond. You don’t even talk to them and they just understand you and they just know. When you spend so much time with them, it creates a bond so strong that you can’t break it. It’s so hard to break those bonds. They last for a lifetime. If you’ve ever seen the videos of the people who sell their horses, and then they come back like 10 years later and see that horse again, that horse immediately recognizes them because that bond never went away. It’s just really cool, and the relationship I have with horses is a special one. It’s very rewarding and it’s indescribable. I can’t even explain it to you; it’s just something you have to feel and experience for yourself.

Have you ever gotten injured while showing? What was your worst injury?

Yeah so I was riding this new horse with a bridle that wasn’t strong enough for her, so the bit was too weak. I had little to no control, and that horse was hot and excited. We’re going around the ring, and I’m slowly losing control but I’m too proud to admit it and my instructor at the time, Sarah, she was like “it’s safe, it’s safe, it’s safe.” Yeah, it wasn’t. We’re going around the ring, and I accidentally hit one of the cones because we were doing pattern work and going around cones. I hit one of the cones, and the horse spooks. I go one way she goes the other, and my leg ended up underneath her hoof. She didn’t step on me, thankfully, because if she did my knee would’ve been obliterated. But she grazed the inside of my knee, so I have some pretty severe nerve damage that I still have now about three years later. It was swollen, it was bruised, black and blue.

The really crazy thing was when I fell off, I was just laying there in the dirt and I was paralyzed. The shock had paralyzed me. And there’s these people yelling at me and they’re like “Are you okay? Are you okay?” and I’m not even able to respond because I’m just staring at the wall. I thought for a second that I broke my back, and I was absolutely terrified because I was thinking “I won’t be able to walk again, I broke my back.” I was preparing for the worst. I was like I’ve really done it this time. Because when you’re riding horses you fall off all the time. That’s just something that happens, especially when you’re learning. It was just scary because I was like this is the last time I’ll ever ride, this is the last time I’ll ever walk. Long story short, I got my feeling back and I was able to walk, well not really, but I could at least move. 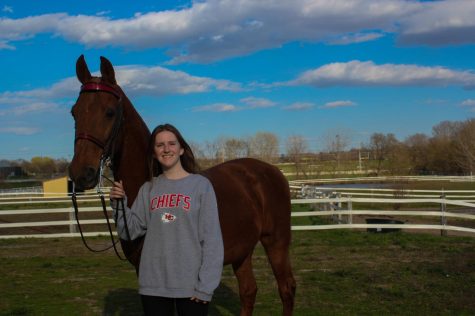 Would you recommend horseback riding?

I really recommend riding horses. It’s a very rewarding experience. It gives you something to live for almost. Obviously if you don’t like horses you probably shouldn’t go riding but if you do like horses and you’ve been thinking about it, I so recommend it. It’s just so rewarding, and they teach you so many skills. Not just skills when you’re riding but skills that you take with you, that even your teachers can’t teach you. They teach you patience, they really ground you like if you get too much of an ego or too full of yourself they’ll quickly ground you, and show you that you’re not as great as you think you are. They’re so honest. They don’t lie to you, and they don’t cheat. They are who they are, and they don’t hide it.

It’s such a loving experience. If you just like animals in general, I recommend going to a horse show and just watching. You don’t have to participate, you could just go and watch, and see these beautiful animals in action and just support anybody who’s out there riding. And boys ride, too. Don’t just think it’s a girl dominated sport, I mean it is, but there are boys out there who ride. I definitely recommend riding if you’re a guy.