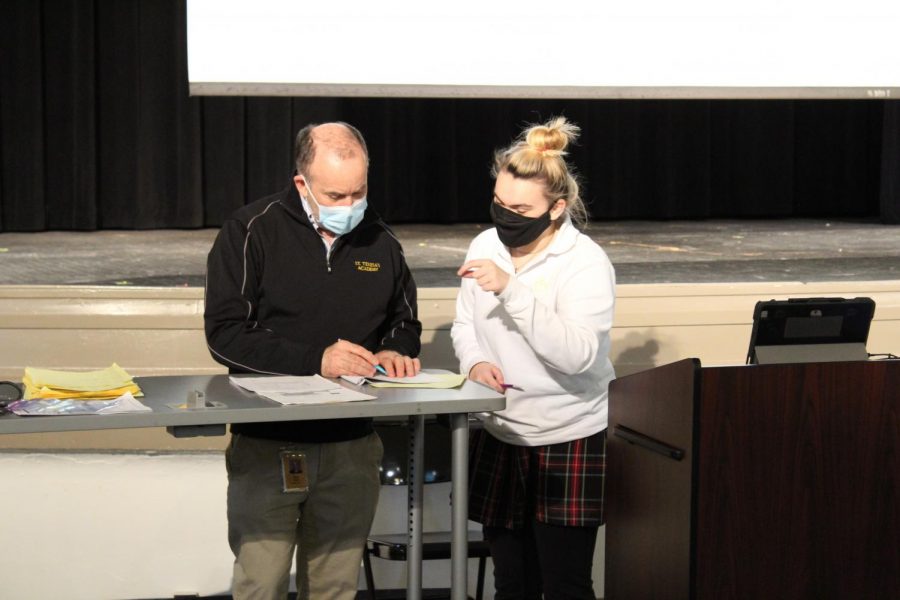 Senior Liv Collet and music teacher Steve Perry go over the sheet music at the front of the auditorium in the Music and Arts building Feb. 24. Together, they had worked on the parts of the song that Collet had questions on. photo by Ali Madden

“I’ve heard it said if only all the leaders of the world could come together and sing in a choir together, it would solve some problems,” music teacher Steve Perry said. “Because our focus is on the music and we learn to listen to one another, I think we learn to express that which is difficult to express or impossible to express with just words, through music.”

Perry has been teaching music for 37 years and he believes in the unifying power of what he calls “corporate singing.” This is the first school year in which his students have not been able to practice this by standing together in his classroom and singing. Until Thanksgiving, Perry held classes on the tennis courts behind the Music & Ars building, where his students would social distance and sing wearing special “singing masks.” This proved challenging for Perry as a teacher, especially with his younger students.

Senior Darcie Hingula is one of Perry’s students and a member of the audition choir, STA Singers. Like Perry, she loves to perform with the other singers because of the sense of unity it creates.

“I think the harmonies just all coming together, even those mini clashes, just really create something,” Hingula said. “There’s some musicality in that, and it’s really special. And also just coming together as a group is super special. We work on creating a lot of unison with our voices, which is really nice and it’s just cool, having a nice choir community.”

Thanks to technology and safety measures taken by the school, all three choirs were able to prepare and perform music for a pre-recorded Christmas concert Dec. 2020. Perry said that an ionization filtration system installed in the auditorium as well as the singing masks have created unique opportunities for the STA choir.

“I know schools who have not sung a note this year and we’re very blessed to have this ability to do what we’re doing,” Perry said.

Last spring, in the beginning of the pandemic, choir members were not allowed to perform together at all and instead opted to record individual vocals and layer them to create a virtual performance. Hingula is grateful that, this year, new technology and understanding of the COVID-19 virus has allowed the choir to perform as one again.

“Even though it’s been very hard, going through and trying to find time to really sing, now, luckily, we have some things that have changed,” Hingula said. “We have ionization filters put into the vents and the system in the auditorium and also in the quiet room, which I think is really nice … So that’s definitely something that I think has really changed the dynamics.”

Sophomore Emma Hirte agrees that technology and creative thinking have granted the choir privileges it wouldn’t have had otherwise.

“Without any technology or anything, there’s no way we would have been able to perform,” Hirte said.  “You know, [during] the pandemic in 1918, there just would have been no way for us to do anything if we hadn’t had the masks, the filters, the editing, and things like that.”

Although Hingula is happy to be performing with her fellow singers again, she still misses having a live audience to perform for. She feels that singing for a virtual audience is not quite the same.

“I think having an audience really brings more life into our performances, just because having someone there being able to watch you and being able to support you and have fun with your songs is a lot more — I don’t know, I think it’s very special to have that,” Hingula said. “And I think the feeling isn’t necessarily the same, just because we don’t have that audience to support us and watch us have fun on stage. It definitely does bring more energy into the room when you have an audience.”

Perry also considers his number one goal of this semester to be having a live performance in front of an audience.

“I just want the students to be able to have that experience so they have something to work towards and also they have a fond memory of that interaction between choir and audience because there is an energy that goes back and forth that you don’t get when you do a virtual concert,” Perry said. “It’s that life. It’s like when you go to a live concert, that energy in the room. And as a performer you feel that energy coming from your audience and those are the kinds of experiences that we can’t recreate with technology.”