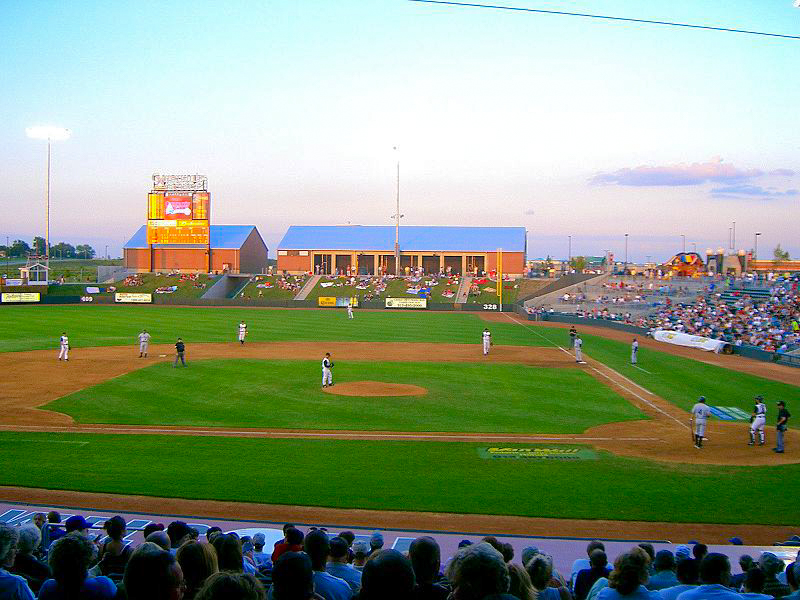 The sun sets over a T-Bones baseball game in 2004. In addition to the team changing their name, the stadium is being renovated to further perpetuate the Monarchs theme. photo courtesy of Wikimedia

The Kansas City Monarchs had the longest-lasting franchise in baseball’s Negro League’s history. The Monarchs have a rich history, kept in the world’s only museum dedicated to preserving and celebrating the rich history of African American baseball and its profound impact on the social advancements of America — the Negro Leagues Baseball Museum in Kansas City, Missouri.

“The story of the Negro Leagues could have only happened in America,” Kendrick said. “It is anchored in the ugliness of American segregation, a horrible chapter in this country’s history. But out of segregation rose this wonderful story of triumph and conquest. And it’s all based on one small, simple principle. If you won’t let me play with you in the major leagues, then I’ll just create a league of my own.”

“Wilkinson would bring the Kansas City Monarchs into the fold, and the Monarchs would go on to become one of the greatest baseball franchises not in black baseball history, but in baseball history,” Kendrick said. “One losing season, in their almost 40-year existence in the Negro Leagues, sent more players to the Major Leagues than any other Negor League franchise, they were an absolute model organization. And I say this with no disrespect to my beloved Kansas City Royals, the Kansas City Monarchs are still the greatest baseball franchise this city has ever seen.”

The Kansas City Monarchs hold such a powerful history in our community. Because of this, when the owner of the former Kansas City T-Bones Mark Brandmeyer came to Kendrick with the idea of rebranding to the Monarchs, he was a bit hesitant.

“The Monarchs is our, that’s our baby,” Kendrick said.

Kendrick’s perspective began to switch as he got to know and trust Brandmeyer and consider all the opportunities this partnership could provide the Negro Leagues Baseball Museum.

“It really started to shift because the realization that I came to was as a museum, and particularly a history museum, and a cultural institution like ours, the challenge is how do you create relevancy?” Kendrick said. “Negro Leagues baseball hadn’t been played in over 60 years. And the opportunity to bring this brand back to light now creates relevancy. That’s what you want to have.”

To Kendrick, the most important part of all of this is to make sure people have access to the story.

“Since we started this thing, that’s one of the reasons why we built traveling exhibitions, to take this story on the road,” Kendrick said. “We needed people to have access to the story. I don’t think there was ever a time that people didn’t want to know about the history of the Negro Leagues, they just didn’t have any way to do so. It’s not in the pages of American history books, and so we needed to provide that access.”

The Monarchs will step onto the field in retro striped uniforms, replicas of the very same uniforms the Monarchs Negro League team wore at all of their games.

“They’re gonna have those pinstripes on every game that they play, and when they’re on the road, and they will be teaching people about the history of the Negro Leagues,” Kendrick said. “When they put those uniforms on, they will be channeling the spirit of Buck O’Neil, of Satchel Page, of Bullet Rogan, Hilton Smith, José Méndez, all of those legendary stars who once called the Monarchs home.”

Sophomore Riyan Jones is hesitant about the name change and doesn’t know if it’s the best idea.

Jones doesn’t think she’s the only one uncertain about the change.

“I think that there will definitely be people upset about the name change,” Jones said.

Kendrick acknowledges concerns that some might have because they might feel a sense of loyalty to the Monarchs brand. In spite of this, he still believes that he and the Negro Leagues Baseball Museum made the right decision in their partnership with the baseball franchise.

“We just felt comfortable that our baby was in good hands, they’re going to do everything they possibly can to protect and enhance the brand of the Kansas City Monarchs,” Kendrick said.

Kendrick expressed that the public at large has been genuinely excited about this new partnership.

Preserving the history of this venerable team is of the utmost importance.

“It’s our job to make sure that the legacy of the Kansas City Monarchs is always at the forefront of people’s understanding,” Kendrick said. “We get to bring that story to life in a meaningful and significant way that really helps people understand the history and heritage of baseball in our city.”