This year STA hosted a virtual auction due to the COVID-19 pandemic. 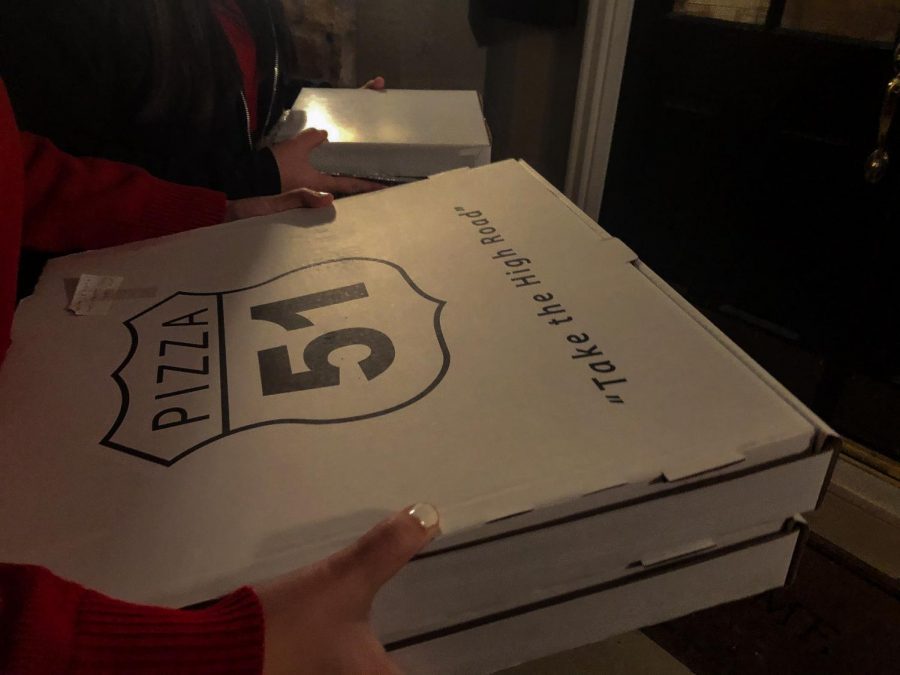 Seniors Isabella Dougherty and Yalei Wilcox delivering Pizza 51 to an auction participant Friday Nov. 20. Both Dougherty and Wilcox say that they volunteered because STA has done so much for them and they want to give back to that community. photo by Josie Fox

In the midst of the COVID-19 pandemic, St. Teresa’s Academy hosted a virtual auction this Friday Nov. 20. The 2020 Auction opened with a pre-show at 7:00 p.m. Friday night with the official live event airing at 7:30 p.m. The silent auction ran until 10:00 p.m. and throughout the night there were varying times live auction items would close. The event was completely virtual this year, but senior Erin Scanlon who helped organize the event as a part of her marketing practicum said that their goal was to make it as interactive as possible.

“Moving it to virtual this year I think it’s going to be better than it has been in the past because we are really putting in the time and the resources to make it an actual production and live event that you would see with lots of organizations” Scanlon said.

St. Teresa’s Marketing Department teamed up with Paradise Productions in Riverside to craft the virtual event where school president Dr. May Washington and Christa Dubill from Blue Cross and Blue Shield would host the live event. The event itself aired live on YouTube Friday night. The Marketing Team also sent sponsors of the event special packages with food and drinks for them to enjoy at home.

The money raised at the auction goes toward financial aid at St. Teresa’s. On the 2020 Auction website that contained all the links to live, silent, and raffle items also included information and a link to donate to the Fund A Future campaign at St. Teresa’s. Scanlon said that the money goes toward aiding a freshman in paying STA tuition. “It’s super important because there are so many girls who would love to come here but can’t. We’ve already raised $41,000 and our goal is $100,000” Scanlon said when referencing the Fund A Future campaign.

Scanlon as well as the Marketing Department recruited STA students to volunteer for the event to sort donations and contact potential sponsors. Organizing the auction this year has not been without its challenges. “It definitely has been a challenge because no one is really familiar with all this production stuff. Normally we would just set up, decorate the gym but this year we’ve been learning how to do so many different things through the talent at this production company and so many different moving parts that we would never have to deal with” Scanlon said.