The COVID-19 pandemic has changed how basketball looks this year and new varsity leaders have plans to make a difference within the basketball program. 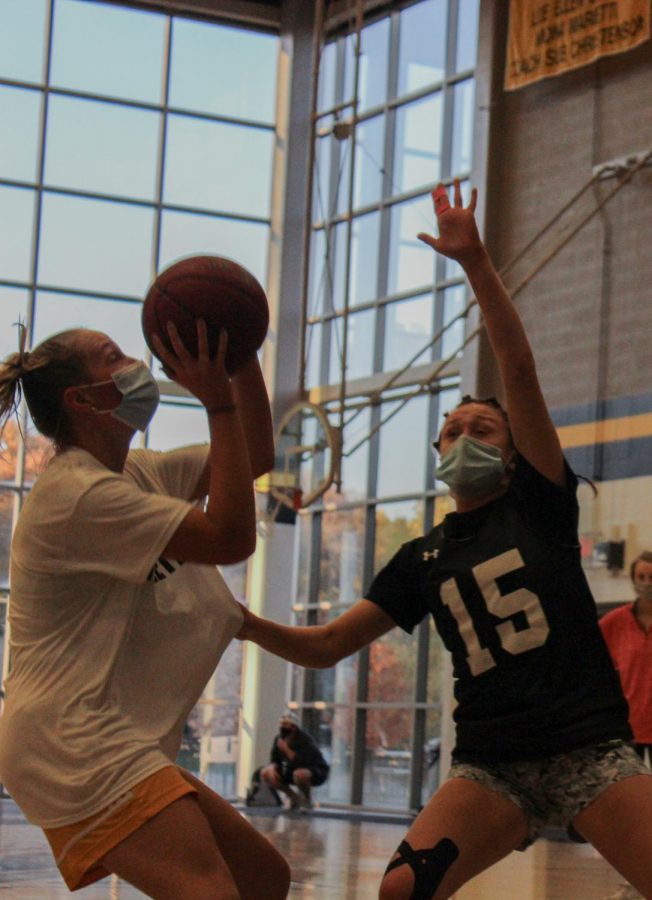 Senior Kate Gibson, left, shooting against junior Grace Quinn at basketball tryouts Oct. 5. Basketball tryouts were held over a five day period of time, and teams were finalized on the fifth day. photo by Sydney Allen

This basketball season will be like no other. Along with the COVID-19 pandemic, there are several coaches that have moved up to lead varsity. Players and coaches will be following additional safety protocols, but even still, many fear the season being cut short. First year head varsity basketball coach Kiera Hardy believes that they can do it all —be safe while building a stronger varsity team.

“A challenge for the season would be just to navigate through the unknown, coming to my first year as a head coach that is one thing that I want to prepare my student athletes for is being okay to go through adversity and face different challenges,” Hardy said.

Hardy played basketball at the University of Nebraska. She also has coached at the college level for NAIA division one junior college. Hardy decided to coach at the high school level because of STA’s unique environment.

“[STA] is a family atmosphere, I mean there’s so much support that I absolutely love, there’s so many resources, the facilities are nice,” Hardy said. “It’s just a great environment for the student athletes as people first and then athletes second.”

The COVID-19 pandemic has made a few of the players unsure about playing this year and how the game will look. Senior varsity basketball player Kate Gibson has played for STA since her sophomore year but believes this year will be difficult.

“I mean it’s really hard running in [masks], especially in a really hot court,” Gibson said. “But really close contact and like all touching the same ball and sweating, I don’t know, I’m curious to see if our season goes on like full, it’s hard to say.”

Even though there is so much that is still unknown, Hardy plans to navigate through it and make sure that the students’ safety comes first.

“There are guidelines that we will follow just to ensure that everyone is safe,” Hardy said. “We understand that our student athletes have families. That is our biggest goal is to make sure we follow all the protocols for the state and here at STA, you know,  just to make sure that we are able to continue to play this game.”

Hardy wants to make sure that even if their season is interrupted that she can still be a role model for the players.

As long as the players are safe, Hardy believes that they should be able to set and accomplish all of their goals for the season.

“Some goals that I have for the season is to create a competitive atmosphere within my program, to build teamwork amongst my team and also just a community within and outside of our basketball program,” Hardy said. “Also I want them to be as productive members of society and evaluate their academics as well.”

Lueke has been a part of the athletic department at STA for the past three years, coaching the freshman and sophomore teams. Her experience playing basketball at STA goes beyond that.

“I went to STA, I graduated in 2016 and I just love the school,” Lueke said. “I love basketball and so when I stopped playing basketball in college, I knew that I wanted to come back and coach and be part of the basketball program.”

Lueke has been playing basketball for a majority of her life because of its competitive atmosphere and team work.

Working alongside the competitive varsity players, the coach to player bond becomes strong.

“I think our biggest goal as coaches is really to work on helping the girls become better people instead of looking at just them as basketball players, it’s important we look at them as people first,” Lueke said.

“As a team, going back to like figuring out who we have,” Gibson said. “I think a team goal is everyone should be able to do something on the court, not like five girls do everything and then bench everyone else. It makes a difference when they are all on the court.”

As for the pandemic, juggling coaching varsity basketball and practicing safety guidelines is a daunting task, but Lueke feels confident that they can work through it.