Streetcar set to expand south to UMKC, along Riverfront area

Kansas City’s streetcar will add an eight mile extension set to start construction in 2022 and be ready to open by 2025. 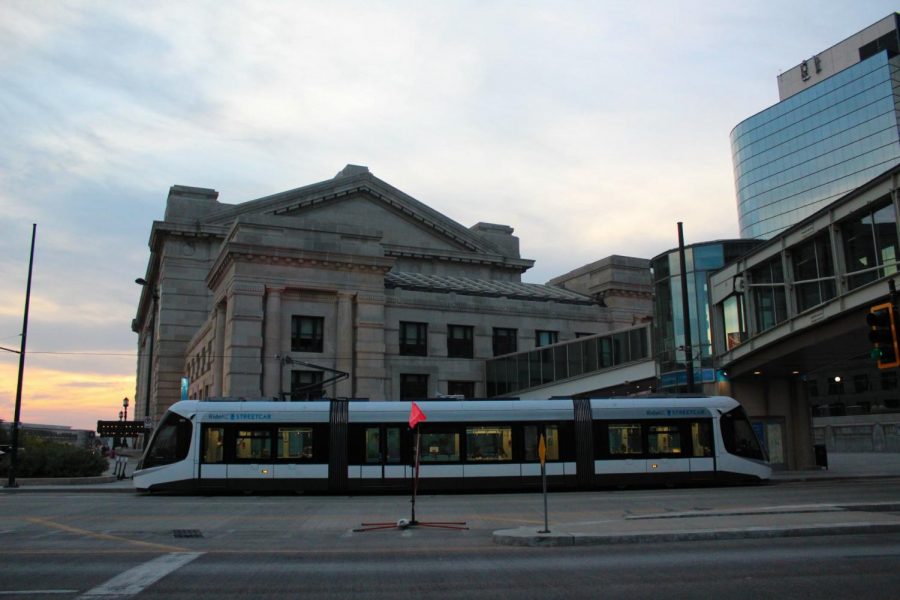 A streetcar stopped at Union station at sunset Sept 26. The highest percentage of passengers that board the streetcar is from the Union Station stop. photo by Caroline Hinkebein

The original Kansas City Streetcar line first opened May 6, 2016, running primarily along Main St. on a two-mile track. It has been a staple of city life ever since, shuttling residents and tourists from Union Station all the way to the River Market. By 2025, the streetcar will have two more fully functional extensions running along the Riverfront area and south on Main St. to the University of Missouri – Kansas City. The Main St. extension plan was approved in May and the Riverfront plan just received approval for federal funding Sept. 11.

Senior Molly Hirner thinks that the streetcar’s Main St. extension will be a good addition to the community and will help make the city more accessible.

“I think like in Kansas City, we have a really bad public transportation system,” Hirner said. “And it’s kind of like — it’s basically impossible to live around here without a car. I think it’d be a lot easier — especially for college students who don’t have cars — for it to be right by like UMKC and kind of by Rockhurst. I also think it would just be better for the community, and like tourism and it would help the city expand.”

Hirner lives in Brookside, and she would use the streetcar if it had a route near her because of the environmental harm and safety risks posed by driving are eliminated by public transportation systems like the streetcar.

“I think there’s just a lot to it like environmental [benefits] obviously because cars are really bad for the environment and also, I feel like it’s a lot safer,” Hirner said. “Cars and car accidents scare me. That’s why I feel like if I had public transportation and it was easier and more accessible to me, I’d use it a lot more because I just would feel safer.”

Junior Hattie McLane does not think that Brookside is a good location for a streetcar extension because of how crowded the area already is with motor vehicles and pedestrians.

“I feel like it would just overcrowd more without actually being used so it would take up space,” McLane said. “It would just add another mode of transportation, besides the bus that already runs through there, and the tons of cars and people that are already there. And I don’t think it would get enough use based on how small of a little area it is. I feel like people mainly walk and if they’re trying to move through it, they drive.”

However, McLane does recognize that UMKC students would use an extension in the South Plaza area and thinks that is a good end point for the new track.

“I feel like that would probably be a good spot to go just because, including UMKC, I know a lot of college students that live around the campus and I feel like they might use it more than the people that live, like, around the shops in Brookside,” McLane said. “Just because I know those are more like families and they have cars, and younger kids will just walk. I feel like if they go farther [north] like that it might be better than if they were to just do like the main Brookside area.

John Martellaro is the director of strategic communications at UMKC and he believes that the streetcar extension will be beneficial to the community in many ways.

“It will provide another convenient means for our students, faculty and staff to come and go to campus, and take advantage of opportunities for living, shopping, dining and entertainment across the city,” Martellaro said. “It will also enhance the opportunities for members of the community to come to UMKC for programming in areas such as performing arts, entrepreneurship support, athletics, cultural programs and so much more.”