The STA volleyball team has many traditions, rituals, and standards that set them apart. 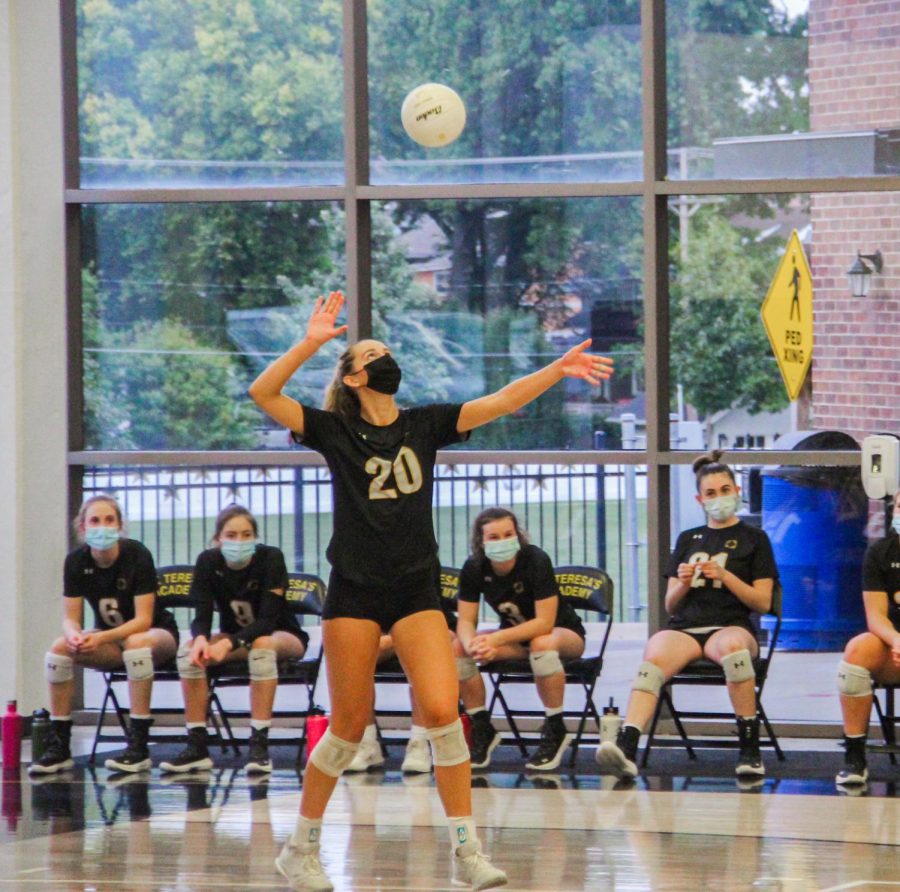 Sophomore Reagan Fox prepares to serve against Bishop Miege High School Sept. 23. Fox has been on varsity since her freshman year, and is an outside hitter. photo by Becca Speier

Junior Alexandria Speier says the volleyball team at STA has a fun and unique team dynamic with tried and true traditions and pregame rituals that allow the players to have a special experience with the sport they love all while also being successful.

According to sophomore Reagan Fox, an important step to help the team get focused before a game is meditation.

“Before every game we have a time of meditation and we envision ourselves playing well on the court,” Fox said. “It’s just a time to get our mindset ready and get into our zones.”

Fox says another thing that helps the volleyball team get into their zones is their weekly readings and discussions from a book called “Relentless”.

“It talks about the mindset of athletes and what some of the best athletes thought processes are like,” Fox said.

For Speier, music is what most helps her get into the zone.

“Before a game we get hype by listening to songs and singing and dancing in the locker room,” Speier said.

But nothing compares to the teams’ special, secret song. Speier says it’s a confidential song known only by the players on the STA volleyball team and which they are forbidden to tell anyone else about. This unknown song helps them become more connected as a team and is essential to their warmup routine. Everyone on the team knows the lyrics and it gets them really excited and ready to play.

Traditions are extremely important for the STA volleyball team and Speier takes pride in the responsibility it takes to uphold them.

“There’s this tradition behind the program of working hard and being committed to the team,” Speier said. “A lot of other schools, if the team’s not good no one tries, no one cares, it’s whatever it’s just high school it’s not college, it’s not club. I would say we take it really seriously even if one year the team is not as great as the year before, I don’t think anything changes.”

One tradition the STA volleyball team does involves a certain costume.

“We have this money suit that we’ve had since my freshman year and we sometimes will wear it on the way to our games and stuff or we just have it in the locker room,” Speier said. “My freshman year we got it just as a joke, one girl wore it to the airport when we were going to California to play. After that, people would just trade off wearing it, and we wore it in our senior night dance and stuff. I don’t know, we just think it’s funny, and it’s something we all know, it’s like our volleyball team thing.”

Themed dinners also help bring the team closer together and strengthen the team dynamic. “This year, our theme for the one we’ve had was Greek and so we all wore like toga stuff, gold jewelry, stuff like that, it was fun,” Speier said.

The main thing that’s helped the STA volleyball team be so successful and set them apart from other teams, is all the hard work they put in.

“We put in a lot of extra work, we stay longer if it’s needed, we go in in the mornings before school sometimes if it’s needed to get more reps, we watch film and do conditioning and stuff just to do more than what our competition does,” Speier said.