The Social Dilemma calls for change in how we use technology

The film “The Social Dilemma” brings attention to the flaws within the design of social media apps and technology and how they should be corrected and regulated to prevent social issues from worsening. 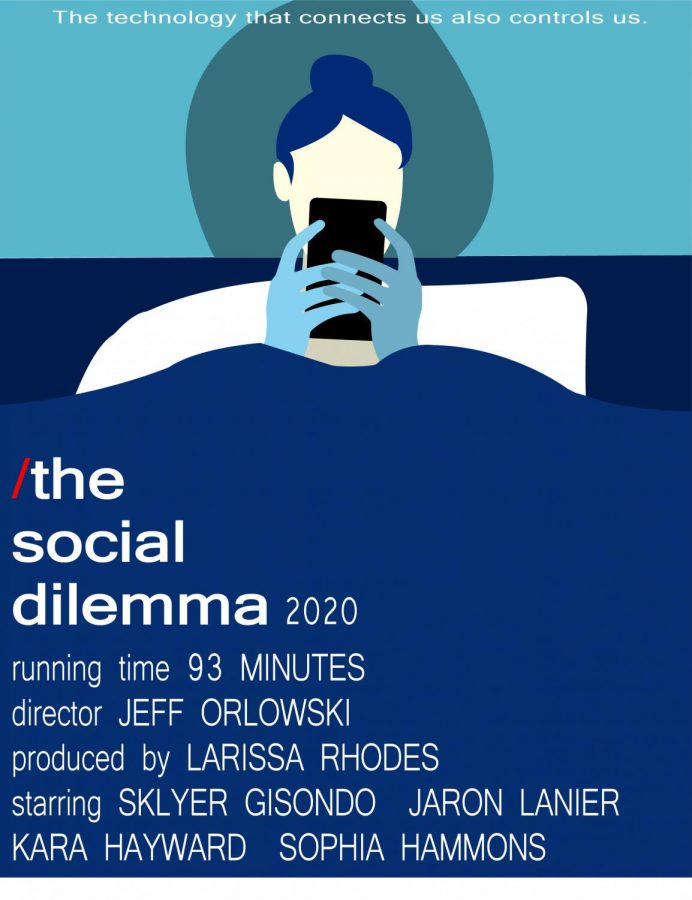 I have always heard about how robots are not to be trusted and how people have feared technology from the moment it was created. It can be seen in movies such as “The Terminator,” “Ex-Machina” and even “G-force” where they all dramatize what would happen if artificial intelligence and technology were to get so advanced that humans lost control. Even today, I’ve heard people laugh about how the smartphone will have a mind of its own and destroy humanity as we know it. But what if that joke weren’t so far away from the truth and the takeover has already started, just not in the way sci-fi movies have laid it out to be with lasers and explosions? Is it too late to save our humanity from the burdens of technology?

The Netflix documentary “The Social Dilemma” was an extreme shock to me, as I never realized how deeply the design of technology was infused with human psychology and behavior. I knew that I was addicted to my phone even before watching the film. I would check every notification and would spend hours each week scrolling through social media posts. I thought that I was choosing to be on my phone, but I have since learned that this addiction was purposefully ingrained into the design.

The documentary relies on interviews of several influential designers and directors for social media companies like Google, Facebook, Pinterest and Youtube. There is also a small story line that progresses in between interviews to demonstrate how technology interferes with the average family.

I liked the storyline of a young daughter, Isla, because I could relate with her the most. Isla is a young teenage girl who grew up with technology and a smartphone, just like I did. She grows self conscious of her appearance and worth because she is constantly comparing herself to her peers, using filters, and receiving negative comments about her appearance.

During one part, she uploads a photo of her face with a filter on it to a platform similar to Instagram, and many of her friends tell her how beautiful she is but one girl says that her ears are too big. That night Isla cries when she looks in the mirror and tries to cover up her ears.

When I first watched this scene, I wanted to be upset with Isla’s parents for not monitoring her screen activity. After watching the remainder of the film, I have realized that I can’t be upset with her parents because they are being manipulated by the same technology as their daughter.

They tried to restrict how much time their children spent on their phones by putting it in a lock box and immediately, all of the family members were stressing about getting back onto their screens. This demonstrated how addictive technology is and  I realized that even for technology’s most conscious users, it can be difficult to cut it out of your daily routine. In the past, I’ve tried to cut down on my screen time use but I always ended up going back to using it.

Tristan Harris, tech designer for Google, commented about how little regulation there is in what content is being presented to kids. I have repeatedly heard the saying “kids today are on their phones too much” and I would just brush it off. This excessive screen time isn’t at the fault of the parent for giving their child the device, it’s the fault of the technology designers for making the tech addictive and then not monitoring what is being put out onto their app. They recommended that parents should set up screen usage limits with their kids and keep them off social media platforms as much as possible, or at least until they are older. I think that parents should follow this recommendation or at least learn how to use these apps safely and understand how each works.

Before watching the film, I had always heard that social media apps tracked your data. I was ignorant to what that data was and how the company would use it. From what I have gathered, each company will keep track of your engagement on the app, what posts you like, how long you spend on each post and your opinions. They will then create a profile of your interests which allows the algorithm to keep sending you media that will keep you on the platform so each time you open their app — your engagement time will only increase.

I didn’t fully understand why curated posts were a problem, aren’t I benefitting from seeing posts I like? The issue is that you feel like you are in control of what you see on the internet but the company is actually choosing for you and has complete power over what you see which influences your beliefs. The film compares this technology to a card trick where you think you are the one in charge of picking the card but it is all just a set up.

These companies are motivated by profit. Tech companies started out as humane: they truly wanted to give everyone a tool that would benefit them. However, once social media companies found out how to monetize their platform, the game changed. Advertisements now fill the space and curated posts are sent out.

I personally am flawed when it comes to technology. I spend more time than I should on too many social media applications and tech devices. At school, I am on a laptop all day and as soon as I get home, I’m on my phone. After giving myself time to process and fully understand the documentary, I have tried to change how much of my life I give to my phone.

I started to feel guilty for having and using social media and it would worsen with each notification or sponsored post I saw. I haven’t used the app Tik Tok in months, but I couldn’t convince myself to delete it until now. Even though I never clicked on it, I felt obligated to have it on my phone. After watching the film, I noticed how much my phone and other devices had gained control over me before I even knew it or realized that it was happening. Even now, I keep wondering what I am missing out on, and I feel tempted to download it again.

Deleting one app was one minor, yet huge move for me moving forward. I also have turned off notifications on all of my non-important apps like Instagram and Snapchat but have left notifications for texts and email. I am trying to reduce my screen time, but I feel like that will take some time to get better at. I never noticed how many precautions should be put into social media use. I think that there should be more awareness and encouragement for people to use these precautions. The film simply opened the door for conversation and now it is our responsibility to continue spreading the word so that the cycle doesn’t continue or worsen.

I think that one of the worst parts about technology is that people don’t understand it or try to understand it because they don’t recognize these problems as problems. “The Social Dilemma” is making an effort to combat this negligence by informing everyone about the dangers of social media. I hope that more people will make the effort to educate themselves about how to properly use the technology that they have before it is too late.