To Test or Not to Test

As seniors head into the midst of sending their college application materials, many have decided to go test optional due to the uncertainty of COVID-19. But, will this choice benefit or harm seniors in their admissions process? 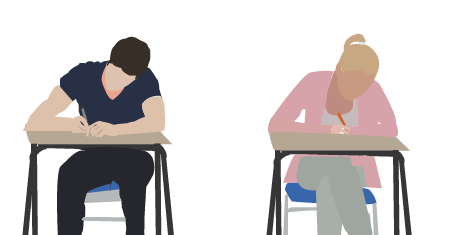 COVID-19 has changed the face of college admissions forever.

According to IvyWise, over 400 institutions decided not to require standardized test scores for the 2020-2021college admissions cycle. This is a 380% raise from 20 schools that went test optional last summer, according to FairTest. As seniors scramble to package their essays, transcripts and resumes to send to colleges by Nov. 1—some see this new test optional environment as a blessing.

Senior Evelyn Diamond took the ACT in February, but her retake opportunities have been canceled four times: April, June, July and August. Despite having a test score, she believes that this does not accurately represent her as a student and is thankful for the opportunity of a holistic review without a score with her application.

“I’ll do short answers and then [recommendation] letters in replacement of an ACT score, which I think is better anyways, it tells more about me than a number,” Diamond said.  “I feel like it just shows who I am instead of the number—going test optional. So, if I get admitted or rejected, then it’s based off of grades and stuff like that, and not my test score.”

According to Forbes, “the NACAC study shows that non-submitters have comparable academic performance, in terms of both GPA and graduation rates, to students who do submit their scores… a test optional policy doesn’t hurt students by creating mismatches or by diluting the quality of the student body at the colleges with those policies.”

“I feel like testing is a hoax,” Diamond said. “I feel like it doesn’t look at anything else except the one day you take a test can depend on your whole college experience. So I’m anti-test.”

However, these scores still hold weight in other aspects of the application process, despite the outward appearance of complete optionality.

Diamond is aware that her February test score is still applicable through the scholarship aspect of her application.

“My parents and I decided that they’re fine with me going test optional as long as I submit it for merit-based scholarships, so I’m going to continue to take it,” Diamond said. “Depending on how many of your tests get cancelled, you have till April 1 to submit scores for scholarships. Either I’m going to submit one just for merit, or completely test optional for scholarships too. I guess it just depends on the school though.”

Jordan Tung is a private college consultant: families come to him to help organize student’s application materials and create a compelling story for colleges. He notes that colleges still have to sort the academic capability of applicants, which is often where test scores would come in.

“I think colleges will struggle in terms of filtering out students who just may not be able to perform academically, because at the end of the day, when you’re applying to super selective college, they get a lot of applicants,” Tung said. “…Colleges are publicly saying that we evaluate every candidate holistically, but if you think about it, it is going to be tough for them to figure out how to pick the kids when it’s [sometimes] a 10% chance. So then you either have to make your other aspects really shine versus other kids, or make sure your academics are up to par.”

In regards to academics, Tung’s advice for seniors is focusing on the other numbers that colleges will be looking at outside of a test score: GPA and grades.

“You also want to put plenty of time in writing and rewriting and iterating on college essays, because that’s really… where you can become three-dimensional,” Tung said. “That’s where you can really separate yourself from the crowd, from having a really compelling essay that talks about who you are and what you do and why you’re passionate about certain subjects.”

St. Teresa’s Academy offered seniors one more chance to take the ACT on Oct. 6, to submit scores before the Nov. 1 application deadline. But a major question still looms in the air: to take or not to take?

“If people are still really working on their college lists, then I would probably recommend taking it to have it as an option if you ended up putting a school on your list that does require it for merit scholarships or does require it for Honors College consideration,”  Jelavich said. “A lot could happen over the next few months, just as a lot happened over the summer. But I think especially for people that are still really solidifying lists, I would probably recommend taking it for now.”

As many colleges have been introduced to test optional for the first time, this may be something they incorporate in future admissions, outside of COVID-19 complications. However, a potential permanent test optional future isn’t going to be immediate.

“I think it’s going to be a slow transition,” Tung said. “…I would say if you’re a junior, sophomore, even freshmen, stay on that test prep route. If colleges move away from testing great, you can just have that piece of high score that you have additional evidence. If they don’t, you’re still in good shape.”

But, Jelavich still has hope for a future of test optional admissions.

“I hope that all of this continues,” Jelavich said. “I hope that the schools that are not test optional, move that direction. Again, because I ultimately think tests are an access issue. I don’t see many colleges reverting necessarily…if they’ve never been test optional before… they’re going to figure out who to admit, they’re going to figure out how to enroll a class. I don’t necessarily see them going backwards in a process in terms of adding in data points.”