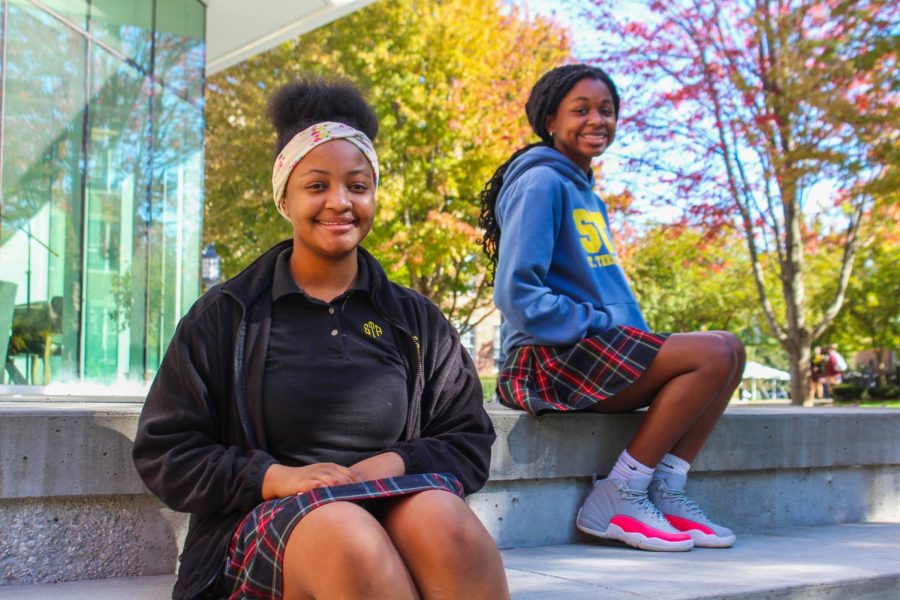 Why did you join BSC? What impact has it had on you?

Bailey: I joined BSC because coming from a school like Raytown Middle — which is very diverse — and then coming to a school like St. Teresa’s the transition was a little different because not that many people look like me. [T]he girl that actually created it, her name was Raiyon, and she was in my advisory and when she told me she was creating it I was like “Wow, that’s really cool” so I decided to join. And it was a really good experience because it’s an area where you can just feel at home. And it’s made me show my personality more at STA.

Riyan: I joined BSC because it gave me a chance to meet other girls who looked like me and be able to have a safe space to talk about different situations around campus.

What inspired you to plan the March on Windmoor?

Bailey: What inspired us was really, we know we have girls there that are allies and want to get involved. So, we thought it would be a really good idea for the STA community to join together.

Riyan: Another reason why I think it was important that we did have the march [on Windmoor] was because a lot of the events over the summer kind of sparked a little bit of something, in I believe everybody. The March on Windmoor kind of gave everybody a chance to kind of fellowship in and discuss what was going on.

By planning the March, what was the most important thing you wanted to communicate to your peers?

Bailey: For me — it was in my speech — was wanting to communicate being silent is not an option anymore. Because this summer I struggled a lot with seeing my friends or just people I talk to at school and I noticed that they were being quiet. They have this thing where it’s like “If I don’t say anything then there is no way I can be wrong.” So in my speech I wanted it to be known that being silent just isn’t an option anymore.

Riyan: For me, I think a big part of what I was trying to get people to realize is that it’s okay to have feelings and it’s okay to express those feelings, but at the same time we need to be able to do something about certain situations and not — like Bailey said — be silent.

What did you feel as you were either giving your speech or marching on the quad? What was the lasting impact of the March on you personally?

Bailey: When I was marching in the quad I just felt so empowered, and I just felt proud to be at STA. Because I looked around and it wasn’t just people of color there, there were a lot of white people there, and that’s what made me the most proud of STA. It was like for once I felt like “Wow, this is home.” They are recognizing, they are seeing the issues that are happening and they are taking advantage of it. And one thing that I thought was just interesting — when Ms. Bri [Ms. Walker] told me that she wanted me to say a speech — I was never nervous because this is something that I’ve always felt so strongly about. And so when I was saying my speech and I just felt so at home because I knew that the people there were going to understand. The lasting impact is that I know that there are good white people out there, that they understand and that they know that what’s going on is wrong.

Riyan: I was happy to see that everyone was able to come together considering what the situation was and we were able to kind of like be there to support one another and be there to hear each other and listen. And that’s something that sometimes that people don’t do a lot, is just listen. I believe that the March on Windmoor gave everyone that opportunity.

Outside of BSC, how are you or have you been active in the BLM movement?

Riyan: A big part of the BLM movement is also recognizing that voting is important. So I got involved with this program called Freedom Incorporated and basically what that is is we go out and we let people know about different people of color who are running for office, whether that’s local government or national government. As well as going to different protests and kind of using my voice to express how I feel.

In what ways could schools or institutions like STA be more supportive of their students of color?

Bailey: I think it starts by beginning to have the conversations, in class, not just the same old same old, “Oh there was slavery, then there was civil rights, now everything is fine.” Cause it’s definitely not true and also when racist incidents come up you need to take accountability for it and say that it’s wrong and not just brush it off. So, I think that having the conversations and literally being zero tolerance.

Riyan: A lot of times it’s important that schools don’t sugar coat the situations that happen. Because I think a lot of times we tend to — kind of what Bailey said — brush them off and kind of deem them as unimportant, but I feel like we don’t get the true meaning out of everything all the time. So, having those hard conversations even though they may not make everyone feel comfortable, they can really help us make a difference in not only the school system, but in the country itself.

Why is youth activism so important, especially with movements like BLM?

Bailey: Youth activism is important because it’s our future. Our parents and grandparents, they’ve done their part. They’ve been to the protests, they’ve lived through most of their life. It’s important for us to be active because we’re now fighting for our future.

Riyan: Kind of going off of that as well, our great-grandparents and grandparents, had made a way for us and so we are making a way for our children and their children to make ultimately — and I know this sounds corny — but making the world a better place.

How do you think this type of activism can be continued at STA? What are some of your goals for the future of BSC and it continuing to be politically active?

Bailey: My goal for BSC is to let everyone know that we’re here and we’re gonna stay here. And that just to also be a safe place for African American girls there and just another outlet to let people be joined as one so we can have more opportunities like the March on Windmoor, to where it’s not only people of color, but everyone at STA joining in.

Riyan: I think it’s important that we don’t make it just a phase, like something we move on from so fast, to kind of sit on it a little bit and recognize that there is an issue and that us as students, we need to have those conversations with each other to kind of find common ground.