With the recent popularity surrounding thrift shopping, students are asked their opinions on this necessity becoming a trend. 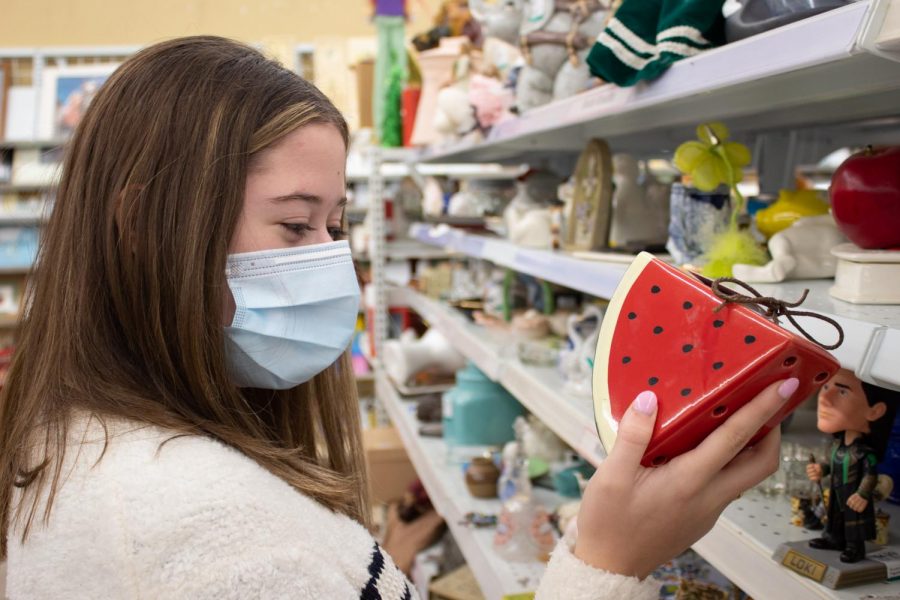 Junior Annie Niemuth continues shopping while scanning over this novelty watermelon sculpture at Savers Sept. 27. Thrift shopping has been a trend amongst teenagers looking for new and different outfits. photo by Lily Sage

Thrift stores are among some of the most popular forms of shopping in America, traditionally used by families who cannot afford expensive clothing brands. Throughout the U.S., 16-18% of the population shop at thrift stores regularly according to Deal News.

However, in recent months, thrift shopping has become extremely popular among people who can afford to wear unused clothes from brands like Target or any other retail store. The main audience causing this spike in popularity are teenagers. The reason for thrift shopping becoming a major trend is unknown but sophomore Charlotte Malone has an idea.

“Lockdown,” Malone said. “No one really had anything to do, so I think a lot of people started experimenting with what kind of clothes they had.” Most thrift stores opened up as soon as possible after being shut down from the peak of COVID-19. Stores like Goodwill reopened as soon as possible and put social distancing measures into place.  Around 85% of small stores closed down during COVID-19, according to the U.S Chamber of Commerce. Thrift stores became one of the only “department stores” left open. There are many other ideas as to why thrift shopping became so popular, such as employment rates dropping and TikTok trends circling around. Senior Grace Swanson gives her thoughts on why.

“Styles from other generations, per se, and kind of wearing clothes from different times has become definitely more popular, which is cool,” Swanson said.

St. Teresa’s itself has a generations day during spirit week, endorsing dressing as older generations. Thrift shops can be used to find vintage clothes because of the huge variety of clothing available.

With recent discoveries around fast fashion, the want to thrift shop has become even more popular. With the arising information surrounding the poor work environment and low pay for fast fashion workers, younger generations have attempted to stop buying from these companies.

Fast fashion workers can make anywhere from 58-90 cents an hour. It is estimated that the fast fashion industry is partly made up of 170 million child labor workers, according to Unicef.

“I think it’s more of a human rights thing and just being more socially and economically aware of where your money’s going,” Malone said.

However, with thrift shopping becoming popular there is an argument that those who truly needed the second hand clothes are being left without clothing.

A popular Instagram post has been going around saying save the coats. With little graphic designs and pastel colors, the instagram post may seem lighthearted, but the content explains how the homeless are left without a warm coat for the winter.  Since many families can’t afford nice coats during winter, thrift stores may be their only option. Along with coats, Swanson believes there are more clothing items that should be left for those who need it.

“Kids clothes. If you can afford it, just go to Target because there’s a lot of little kids that don’t have anything to wear and that’s kind of their only source of getting it,” Swanson said.

A popular trend in the media is buying children’s shirts and reselling them on popular clothing apps such as Depop or Poshmark for high prices to make a profit.

Stores like Target can provide less expensive options without taking clothes away from people who utilize thrift stores as their only option. Other STA students, like sophomore Autumn Shemitz, encourage others to leave children’s items.

“I would see backpacks in thrift stores and be like, oh that’s cute, but then I’m like, there’s children who need backpacks to go to school. And where are they going to get their backpacks?” Shemitz says.

With all the information surrounding fast fashion and the controversies around taking advantage of thrift stores, students like Malone are being left wondering what the most responsible approach to thrift shopping is.

“I’ve seen a lot of stuff, both for it and not for it and so that’s why I spent a lot of time going back and forth on whether it’s something I should really be doing,” Malone said about the decision to thrift shop.

That’s the question that many teenagers find themselves contemplating—is thrift shopping ok if you have the option to buy nicer clothes?

There are many advantages of thrift shopping including its lesser environmental impact. A single cotton tee shirt, on average, takes 2,700 liters of water to produce, according to the World Wildlife Fund. By wearing used clothes, consumers are saving gallons of water by not purchasing a new shirt. Many synthetic materials are made of plastic. Resulting in plastic arriving in landfills due to fast fashion.

“The thing with fast fashion is that it’s produced quickly and cheaply and then sold cheaply,” Shemitz said.

In order to attract young people, fast fashion companies such as Romwe and Shein, sell their items at a low price. Fast fashion is trendy clothes made with cheap material, designed to use once or twice. Even with the issue of fast fashion, Shmetiz thinks it’s important to not make thrift shopping a trend, and should not be taken advantage of.

“Thrifting isn’t really aesthetic, it’s not a cool quirky thing,” Shemitz said. “Going thrifting and buying secondhand clothes is definitely something, if you’re able to do, you should. But I think it’s important to remember that some people really do rely on thrifting as their only source.”